The boring Republican National Convention and the uneventful presidential campaign 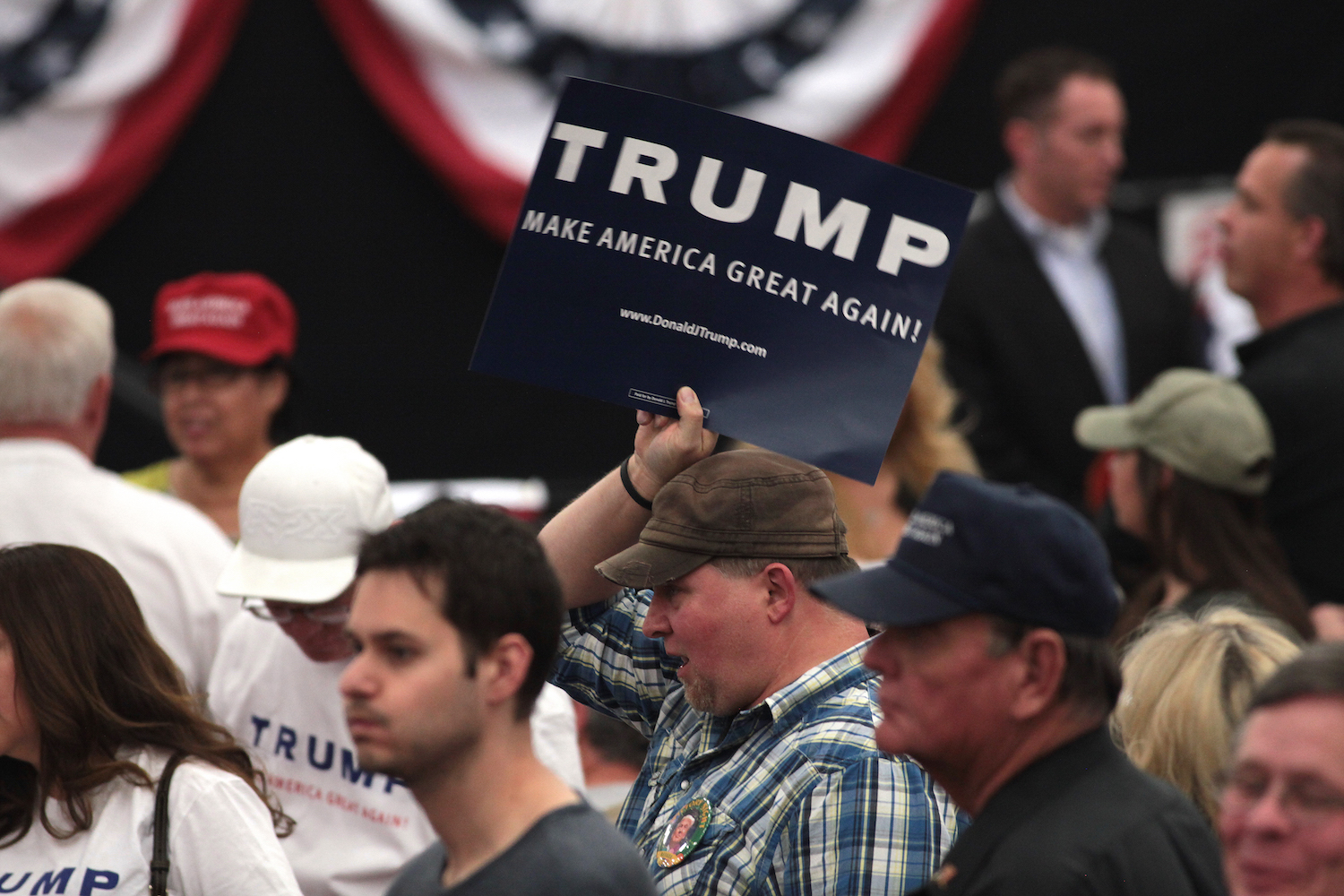 I have mostly avoided writing on American politics since the end of May primarily because there is very little to write about. Yes there have been the stories of Trump saying or doing outrageous things, or of the FBI director reading Clinton the riot act regarding the negligent way she handled her emails, but both amounted to tales everyone has heard before. If any potential voter is not aware by now of the fact that Donald Trump is effectively the personification of a political talk radio host, or that Hillary Clinton believes that her family is above the rules then the potential that such a voter will actually bother to turn out in November is purely theoretical. It strikes me as inconceivable that anyone who is likely to listen to Donald Trump or witness his supporters and decide to cast a ballot for Clinton because they view Trump as racist or fascist has not already long since reached that conclusion. As for Hillary Clinton, her detractors exist in two categories. Those who view her as a malicious satanic character responsible for numerous crimes over the last two decades, and those who merely see her as a representative of a political class that has utterly failed the country over the last two decades. In the former case, chants of "Jail her" may rile them up, but nothing is likely to move them. As for the latter group, nothing short of an indictment was likely to move them. They will vote for Hillary Clinton over Donald Trump if the latter appears to have a real chance of winning, but otherwise may cast protest ballots or not matter. There is little evidence of real movement between the candidates.

That is not to say there has been no movement in the polls. From a near tie in May, the race moved to a substantial Clinton lead in June, only to move back to a near tie in July. But the major driver of this movement has been the variations in Clinton's numbers, which also in many polls appear to be a result of Democrats dropping in and out of likely voter screens. The few times Trump leads, it tends to be in the low 40s, and have tended to be in four-way questions, whose veracity there is reason to be dubious of. It is of course possible that both candidates will in fact end up there, but the general trend throughout US history has been for third party candidates to fade down the stretch. This is not solely because of strategic considerations pushing voters towards one of the two major parties, but also because turnout for third party supporters tends to be quite low. Desiring Hillary Clinton or Donald Trump to become President, or perhaps in the case of this year, not become President, is a good reason to take the hour or so of time to drive to a polling place and count a ballot. A mild preference for the Libertarian or Green parties to win 6% of the vote instead of 4% is a marginal one at best, and that assumes that those claiming to support either of those candidates in polls actually are expressing a preference for the candidates or parties rather than a dislike of the major party options. In effect, those who say they will support Clinton or Trump when provided two options, but express support for Libertarian Gary Johnson or Green Jill Stein when four names are read out to them on the phone will likely either vote for one of the former or not at all.

A lack of suspense leaves the media looking for some other sort of story. The result has been to promote personal gaffes into major campaign issues. No better example of this has been the coverage of the Republican National Convention, which from the start was designed around the expectation of covering a disaster. Major media outlets expected to arrive in Cleveland to cover clashes between pro and anti Trump protesters that might even have amounted to riots given the rising tension in recent weeks between the Black Lives Matter movement and various police forces. That this has not developed seems to have come as a disappointment to outlets which after an abortive effort to spin a last ditch attempt by anti-Trump delegates to force a roll call on the rules which they almost certainly would have lost, settled on evidence that segments from Melania Trump's convention speech were plagiarized from Michelle Obama's in 2008. This was an embarrassing failure of staff work, but hardly a shocking one from a campaign that does not appear to be staffed at the level of a high-level Senate race, much less a national presidential campaign. The fact that it dominated coverage, which the media blamed somewhat defensively on the Trump campaigns mishandling of the fallout, and the Trump campaign on liberal media bias is in fact a testament to neither. Rather it is a reflection of how boring this campaign is, especially following what was probably one of the most exciting and interesting Republican primary campaigns in history.

The simple fact is that the Trump campaign, and Trump himself, are ultimately boring. What made the Trump phenomenon interesting was not so much either, but the way in which Trump interacted with - read eviscerated - Republican candidates and institutions. The GOP debates were not policy discussions, though policy played a much greater role than in 2008 or 2012, but rather an exercise in bullying, a reverse revenge of the nerds in which Trump, representing everyday ordinary Republican voters, systematically bullied fixtures of the Republican establishment and rising stars of the DC media in way reminiscent of middle school.  Voters enjoyed seeing Jeb Bush, Marco Rubio, and then Ted Cruz. They may not have actually thought that Ted Cruz's father killed JFK, but they found his anger at the charges and humiliation that he was losing to Donald Trump hilarious, much as they enjoyed the frustration of the national political press at Rubio's electoral setbacks.

All of that ended on the day of the Indiana primary. With no enemies left to bully at debates, Trump suddenly became repetitive, and dare I say repetitive. There was a brief moment of excitement when it seemed that he might face Bernie Sanders in a debate prior to the California primary, and the media salivated at the prospect. But Trump himself, demonstrating for the first time that he did not in fact understand his own appeal, or comprehend the reasons for his success, dropped out. In hindsight this was a critical mistake. Trump is at his best when bullying someone unlikable. In the absence of that, he lashed out at whoever was in range, and as it turned out, someone well outside of it. That was the judge presiding over the Trump University case. Rather than being an eccentric diversion, Trump's decision to launch that attack was fully in character.

The best thing that Hillary Clinton has done in the last month, is that when faced with an uninteresting campaign, she has done everything possible to make it even less eventful. Even if she gains nothing, she clearly understands that Trump actively loses from a no news day due to his compulsive need to generate attention. If, as rumors suggest, she is now looking at either Virginia Senator Timothy Kaine or former Iowa Governor and Agriculture Secretary Tom Vilsack for Vice President, it is evidence that she understands that the more boring this campaign, the more invisible her own profile, that the more gaffe-prone Trump will be.

The Republican National Convention is the best example of this trend. It has not been the disaster many predicted. No riots have broken out. Last ditch #NeverTrump efforts fizzled. But the very lack of interesting events has backfired. A political normally features suspense by acting as an audition for future candidates for national office, but with ambitious candidates staying away, it has been an exhibition of has-beens auditioning for roles in a Trump administration. Former New York Mayor Rudy Giuliani, soon to be former New Jersey Governor Chris Christie, former Governor Jan Brewer of Arizona. Trump's VP pick, a strategic error in itself, Governor Michael Pence of Indiana is himself the epitome of boring conservative, meaning that the only interesting figures are the Trump family and the only drama that can come is not from the content of their speeches but rather from the intrigue behind them. Hence the focus on Melania's plagiarism, as well as the subsequent effort to create a second plagiarism story around Donald Trump Jr.'s speech which unraveled when it came out that his speech writer was the original author of the passage supposedly plagiarized.

This is unlikely to change much in the final night. Trump's speech may generate press, but Clinton has little to no reason to rock the boat. It is likely the DNC will studiously ignore the existence of any of the issues highlighted by Trump. It is therefore unlikely much will change until the debates, when Trump will finally be back in his element. Until then, there seems little to watch or comment on, and even the Upshot and Fivethirtyeight seem to be going through the motions. Who would have thought that one of the most interesting primary campaigns in history would produce one of the least exciting summers of all time.

Trump, Clinton, Sanders, and the failure to learn anything so far this year

The rotten three legs of the stool: Donald Trump didn't destroy American Conservatism, it was rotten to the core