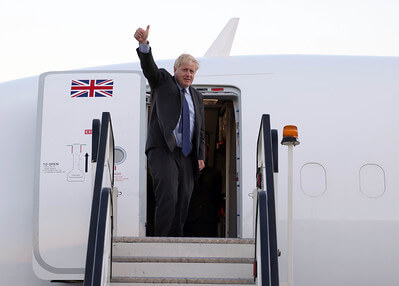 The fall of British Prime Minister Boris Johnson is being cast in ideological, geopolitical, and even literary terms. Writers concerned with geopolitics speculate on the role played by Johnson’s championing of aid to Ukraine, and what impact his fall might have on British policy. American writers, especially on the left, either see the process by which Johnson fell as evidence of the superiority of a different constitutional system (albeit unwritten) at a time when they have decided America’s is irrevocably flawed, or they view it in ideological terms. Johnson, who they identify with Brexit by ideology, and Donald Trump by character, represented the ascent of the “Populist Right.” His fall, they say, must represent its defeat.

None of this reflects reality. Ukraine played little to no role in Boris Johnson’s departure. The procedures under which he was removed were not constitutional, but internal to the Conservative Party and revealed flaws in the party’s rule book which will lead to revisions, just as the rules have been rewritten after every leadership election since the 1980s. Since 1990, no two Conservative leaders have been elected under the same electoral system or rules. Rather than a repudiation of the American Constitutional system, the example of both major parties in Britain is that efforts to constantly reform electoral rules is a recipe for chaos, not legitimacy or order.

As for the wider ideological significance of Johnson’s ouster, it must be said that he never fit well into any sort of ideological box, and the revolt against him this past week encompassed elements of the right and left wings of the party. His loyalists included Foreign Secretary Elizabeth Truss, who campaigned hard to Remain in the E.U. and was a Liberal Democrat who favored abolishing the monarchy at Oxford, as well as Jacob Rees-Mogg who had called to leave the E.U. for decades. It was this idiosyncratic ideological positioning which enabled Johnson to come to power in 2019 and enjoy immense popularity with all wings for some time. It is also precisely what left him with no factional or ideological base of support when the center could not hold.

Johnson is difficult to classify because in the modern era we have become used to consistency across issues among politicians. A liberal holds liberal positions on every issue. A conservative in the U.S. will generally be Pro-Life and oppose higher taxes or gun control. There are exceptions, of course. Figures like Glenn Greenwald or Bill Maher might disagree with the Left on key issues without in fact being a conservative, but in the post-2016 world that has been enough for Greenwald to be labeled far right. Disparaging accusations of Russian collusion against Donald Trump, and dissenting on identity politics issues meant Greenwald, who is gay and married to a left-wing Brazilian congressman, has been termed a “fascist” by many elements of the left. Meanwhile Bill Maher, who has suggested that children may be being influenced to transition genders by a social contagion, has been excommunicated.

Bill Maher is in many ways an apt comparison for Boris Johnson. Like Maher, Johnson was first and foremost a journalist. He came to fame with his columns, and in contrast to his usual lack of principle or consistency, he was consistent on one issue. From the late 1980s, when he served as a correspondent in Brussels, the European Union’s capital, he was a relentless critic of the European project, and of Britain’s membership in it. He had other eccentricities, including a fascination with startup and entrepreneurial culture, as well as a desire to bring America’s hi-tech business environment to Britain. But this was based upon fascination with something which clearly worked in America and not in the U.K., and was not a result of academic study of economic theories or a personal worship of Thatcherism.

If there was a model for Johnson, it was not Thatcher but Churchill, another eccentric politician who defected from Conservative to Liberal to Conservative again. Churchill’s abiding principle was British Greatness, which he would promote through policies left or right provided they reached that goal. For Johnson, this manifested in “modernization” – of Britain culturally, economically, and socially. In the case of London, this meant modernizing government, cutting taxes, improving transport, and reducing crime as well the piles of garbage which piled up in council areas. Johnson’s social liberalism on gay rights and immigration was not centrist balancing, but rather informed by a belief that to be great and modern, Britain must be global. To Boris, that meant both bringing the best and brightest to Britain and building the sort of Britain people would wish to move to.

For Johnson, the E.U. was an obstacle. Freedom of movement meant the prioritization of low-wage, low-skill labor from Eastern Europe, and the restriction of high-skilled, high-waged labor from the United States and Asia as those regions were outside the E.U. If others such as Nigel Farage favored leaving the E.U. because they wished to limit E.U. migration, Johnson wished to leave so that he would not be required to discriminate against non-E.U. immigrants.

In the dark days of 2018 and 2019, when Brexit looked like it might be lost, differences of motives did not matter. Brexiteers had lost faith in the British class. There is an argument that their embrace of Johnson was mercenary and they should not have trusted him on Brexit. That is to misread the situation. They embraced Johnson because the one thing they knew they could trust him on absolutely was Brexit. It had been at the heart of his vision of the world for 30 years. What he did after might diverge from their interests, but they trusted he could and would “get Brexit done.” And so he did.

A divergence of interest between Johnson and the Thatcherite right was probably inevitable after his 2019 triumph, and Johnson’s ability to appeal for support to the center and other elements of the party was undermined by the bad blood generated by the Brexit wars and his dethronement of Theresa May. But the sheer scale of his success in December of 2019 and delivery of Brexit likely would have quieted criticism and provided a mandate for the technocratic modernization he had always dreamed, had COVID-19 not caused the tensions to explode.

The Thatcherite right was well aware of Johnson’s divergences on social policy and immigration when they backed him, and likely would have swallowed his project in exchange for Brexit. The same was not true of a “technocratic” approach to COVID. Britain, for all the attacks from the left on Johnson for “delaying” lockdowns, spent more time in brutal and punitive lockdowns than any country outside of Asia. The U.K. was locked down from March through late June of 2020, and again from November of 2020 through March of 2021. A final lockdown occurred between December and February of 2022. In total, the U.K. spent well over a year in lockdown. At the end of it, the government imposed vigorous mandatory vaccination policies, including vaccine passports for entry into restaurants, nightclubs, and for all public employees.

Deference to the “experts” was fully in line with Johnson’s modernization agenda. However, this alienated not just the Thatcherite right within the party, but many of the working-class voters who powered Johnson’s 2019 victory. They were the ones most offended by the perception that the Prime Minister and his team felt “technocracy” was for governing the plebs, but not for those who governed.

Johnson’s position was further undermined by the greatest economic crisis Britain has suffered since the 1970s. As with the U.S., Britain is suffering high inflation. In fact inflation in the U.K. is even higher, with the Bank of England estimating it will hit 11.2% this fall. Gas prices were $8.89 a gallon at the end of June. Johnson’s erratic economic policy, which some have termed populist but is best read in terms of his attraction to “fads,” contributed to worsening the crisis and limiting the tools available to soften the impact.

In response to COVID-19 lockdowns, Johnson and his Chancellor cooked up a scheme whereby if employers, rather than firing workers, furloughed them with 80% pay, the government would pay 75% of it. The result was the government paying companies to keep surplus employees on the books doing nothing while a labor shortage developed. Other ideas, including an “eat out to help out” plan in August of 2020 in which the government paid for a third of all restaurant meals, were blamed for a COVID resurgence. The main result of these policies, however, was to wreck the government’s finances, and unlike the U.S. where imports are denominated in dollars, the U.K. has to convert Pounds to buy energy. The Pound has lost nearly 15% of its value in 2022, contributing to price inflation. Further spending on subsidies would cause the Pound to fall further.

Johnson thus found himself in a situation where his obsession with “modernization” and “technocratic” government had mortally offended the right and working-class voters, but was also blamed for creating a major economic crisis by the groups who would normally find such governance appealing. In this context, when his Chancellor, Rishi Sunak, in charge of economic policy, resigned saying he was unable to execute his job, and Johnson announced he was now free to cut taxes and spend more, it enraged the fiscally conservative and technocratic wing without winning over the right. He found himself deserted.

Johnson’s failure is a personal one, but to the extent that it is also ideological, it is not the failure of the Thatcherite model or Brexit. Rather it is his own brand of “technocratic modernization” and government by experts and consultants that has been found wanting. Much as it has everywhere else in the West, his governing model failed to survive contact with COVID, resulting in high debt, surging inflation, and factional strife. The quick collapse of Johnson’s own position owes much to the fact that this project was his alone, and so he was the one to blame. When it could no longer command votes, or produce economic results, Johnson found himself in the position where he had always been – alone.

There will be efforts to provide ideological answers to the question of “where to go now?” in the British Conservative Party, but the non-ideological nature of Johnson’s tenure means that his fall cannot provide much guidance. Those seeking to read into it would be better asking the question most Conservative MPs will be contemplating: Who can fix the economic mess and provide a vision which can win an election in 2024? That, it seems, is the real question.