Trump, Clinton, Sanders, and the failure to learn anything so far this year 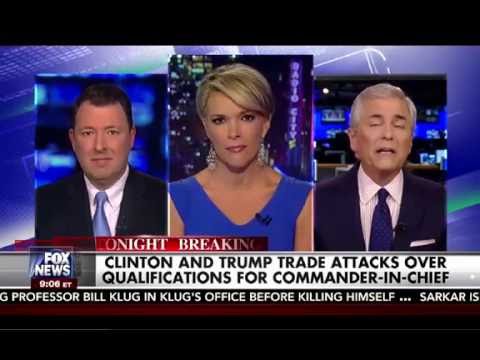 Two major developments have occurred this week in American politics. The first has been the rapid narrowing of margins in general election polls between presumptive Republican nominee Donald Trump, and presumptive Democratic nominee Hillary Clinton. The second has been the descent of the Democratic primary into bitter and brutal identity politics, albeit along ideological lines. To some degree the two are linked, but I want to deal with the first of these right now because I think there has been a tendency to blame the Democratic primary for the narrowing in the polls, which involves dangerously ignoring the context of what else has been happening over the last few weeks. This narrowing, which began with a PPP poll showing Trump trailing Clinton only by 6, culminated in two polls from Fox News and Rasmussen Reports respectively showing Trump actually leading by 3 and 5 points respectively. The reputation of the latter two pollsters reinforced the skepticism of many Democrats, and regarding Rasmussen those feelings may well be justified. Not only does Rasmussen have a questionable record, but the general election poll explicitly offered respondents the opportunity to express support for “some other candidate”, which may have contributed to only 79% indicating support for Trump and Clinton combined. But the totality of polling, which in recent cycles has been more right than not, almost certainly shows closing. This week we have had general election polls with Clinton leads of 6,6,4,2,-3, and -5, which produces an average of 1.33%, probably too low, and a median of a Clinton lead around 3%, which likely is about where the race is.

For those who are not apt to dismiss these results outright two explanations have become popular. The first is that this tightening is natural, the result of a nomination “bounce” for Trump. I tend to agree with this explanation as far as it goes, though I would point out it is has occurred over a period during which the last two Republican Presidents, and the last two Republican Nominees refused to support Trump, and the sitting speaker of the US house remained neutral. It also occurred after Trump’s “taco bowel” social media eruption, and goes to show something I have long suspected. Namely that Trump’s opponents have consistently misread the efficacy of attacks on his candidacy, especially ones focused on his supposedly unacceptable views.

Rather than serving to disqualify him as a potential President and to make even diehard Republicans think twice about supporting him, the Clinton campaigns initialsalvos featuring attacks by senior Republicans seems to have only served to reinforce Trump’s outsider credentials by painting an image of Washington elites rallying to Hillary rather than men(and women) of goodwill rallying to save the republic from Trump. In effect, rather than suggesting to voters that Trump is so bad even George W. Bush cannot support him, the actual result has been the reverse, to tie Hillary Clinton to a still unpopular President Bush by implying that the author of the Iraq war and the budget deficit now supports her. Similarly, I also suspected that the general tenor of social media attacks on Trump, which have mostly come in the form of sneering contempt, mockery, and general shock that someone could express or hold such views have mostly backfired on those launching them. Anyone who is apt to consider Trump an unredeemable racist, or to see that as a reason never to support him likely long ago made their choice. At the point at which Trump’s appeal has been framed in the context of “I don’t agree with everything he says, but for the first time in decades someone is actually saying things” suggestions that his words or social media engagement are unacceptably offensive are likely to cross that most dangerous of all political lines; endeavoring to tell voters what they must do rather than trying to persuade them as to what they should. And juxtapositioning violent clashes with left-wing protesters at campaign rallies  is probably the last thing the Clinton campaign should be promoting after the events in Nevada last weekend.

Furthermore, the last two weeks have demonstrated something that should be more disturbing, namely Trump's ability to deflect from negative stories by inserting new ones into the discourse. This ability, much mocked, was utilized during the primary campaign when Trump publicly mused about whether Ted Cruz's father was involved in JFK's assassination. At the time the story was mocked, but its major impact was that it swallowed up every other item that was happening that day. Instead of framing Indiana as the last chance to stop Trump, the media spent the day making jokes about Ted Cruz, and voters entered the polling booths considering Cruz a figure of ridicule. This week we saw an even more impressive variant. Over the weekend, Trump appeared to finally be taking on water over a strange Washington Post storyabout how he impersonated various fictional "Trump spokesman" in order to talk about himself in third person.It was the sort of story that might actually hurt Trump by making voters stop admiring his outspokenness in favor of contemplating the wisdom of placing nuclear weapons into his hands. Coupled with an interview in which his long-time butler called for Hillary Clinton and Barack Obama to be executed and for Detroit to be nuked, the weekend presented two stories of the sort that would have doomed any Senate candidate in a previous year, and inflicted "47%"-esque damage on a nominee.

Not so for Trump. By Tuesday no one was discussing either of them. Instead, Trump had managed to draw London's new Muslim mayor Sadiq Khan into a public spat, one that also managed to drag-in British Prime Minister David Cameron. Far more interesting than fake voices or a crazed butler who had by now been moved to an undisclosed location, the media jumped on the new story which dominated coverage until the horse race, and implosion of the Democratic primary could fill in the gap.

Remember how I brought up why I thought the Clinton assaults on Trump which utilized senior members of the Republican old guard were a mistake? The major pattern during the Republican primaries in every case where a rival attacked Trump was two-fold. Not only did the attacks fail to significantly dent Trump's own numbers; they almost invariably backfired and destroyed the image of the one launching the attacks. Marco Rubio got out just as he was becoming a figure of mockery. Ted Cruz became one. In the case of Clinton's attacks, not only did she fail to damage Trump by highlighting the hostility of a professional political establishment, but she damaged herself by identifying her own campaign with it. It is bad enough Hillary has to defend Obama's record against attacks from the left. In the last two weeks she has implicitly become the chosen candidate of the entire DC elite. Of not just the Bushs, but of Paul Ryan, Mitt Romney, and John McCain as well.

The effect of this has been to polarize the Democratic race even more on insider and outsider lines. As Clinton presented herself as the defender of existing order(and civilization) against the Trumpian barbarian hordes, so too did she enrage all those on the left who also resented that establishment. And the shift to an insider/outside axis rather than a left/center-left one in the Democratic contest left no middle ground. In an ideological contest, Clinton choosing a left-winger like Elizabeth Warren for VP would be a peace offering. In the new world, the acceptance of such an offer would make Warren a traitor to the cause.

This is no small issue. A willingness by Sanders to continue the campaign to the convention creates an endless set of problems, the first being what Clinton does after the primaries are over. The Sanders campaign has already made clear it will refuse to accept a Clinton declaration of victory, and therefore any move to a general footing would be fraught with danger. Does Clinton appoint a VP? If she does, that VP might well become the focus of resentment from Sanders supporters and constant demonization such that not only do they not provide a bounce, but they become a genuine liability by August.

At the same time, as Democrats have been wise to note, there will be a feedback into general election polling. But that feedback may not vanish with the end of the primaries. The major shift over the last two weeks, one which has been triggered as much by Clinton's own positioning against Trump as by any actions on the part of Trump or Sanders, has been to a narrative of insiders v. outsiders. That is dangerous. After both conventions, Trump, despite apostasies on trade will still the right-wing choice for the overwhelming majority of voters, and Clinton the left-wing one. But it is equally true that no matter what happens, Clinton is going to be the insider candidate for President in November and Trump the outsider. If the final ten weeks of the Democratic contest, along with what aspects of the general election take place concurrently, are spent framing the conflict along such lines, then it is much easier to see voters motivated by hostility towards the political establishment in all forms voting on that basis. And Clinton's own attacks, perhaps driven by Obama advisers who believe it is 2012 and Clinton veterans who think it is 2000, are reinforcing that message.

Clinton is almost certainly not behind right now. She remains the favorite for both the general election and the Democratic nomination. But if the last two weeks are anything to go by, she may have a much tougher road in November than anyone has suspected, and Democratic dreams of a landslide are likely to appear delusional. Democrats appear not to have learned a single thing from the Republican contest and are just as determined as the Rubio, Walker, and Jeb Bush teams to fight the last election rather than the 2016 one. And they appear remarkably tone-deaf regarding messaging, and how important elites actually are.