You should not fear Corbyn because he opposes Trident Now, but because he did so in the 1980s 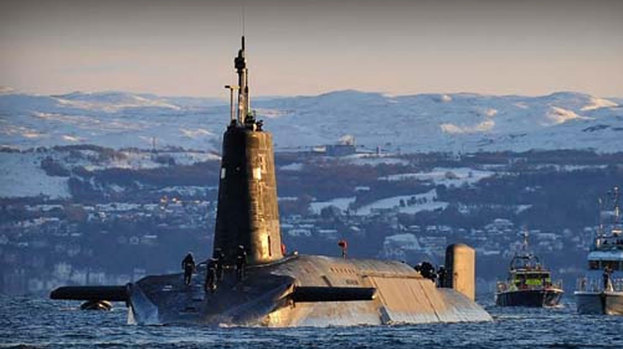 Imagine for a moment that it is the middle of the Cold War. Soviet forces have overrun Germany along with most of France, and just as in 1941, enemy legions lie massed on the far side of the English channel. Like the Germans before them, the Soviets are more than aware of the logistical hurdles to an invasion without air superiority or naval superiority, the two great weaknesses that the Warsaw Pact suffers in comparison with NATO. Hence the Russians resort to the same tactics as the Luftwaffe before them, bombing civilian targets to force a surrender by the British government. Only this time as a demonstration they nuke Birmingham.

What will the United States do? Nominally, Britain lies under the American security umbrella, American forces have been fighting the Soviets on the continent. But as of yet, the American continent is untouched. No bombs have fallen, no missiles have struck. And the Soviets public make clear that none will do so, at least provided that Soviet cities don't go up in mushroom clouds as a result of American missiles. Will the United States use its nuclear arsenal to retaliate for Birmingham?

The above scenario is exactly the one that from 1951 onwards provided the justification for the United Kingdom's independent nuclear deterrent, and on a similar basis for the French one. The United States nuclear arsenal was without a doubt sufficient to deter an attack on the United States, but it was never quite clear if it was a deterrent to an attack on American allies, especially as long as the United States itself remained untouched, and the Soviets seemed inclined to take their winnings in Europe. In such an event, no MAD would automatically apply upon a Soviet invasion of France, or nuclear attacks on British cities. Britain would be left at the mercy of the Soviet arsenal, and therefore to the choice between surrenders or destruction.

Introduced at a time when NATO was two years old, and the United States was bogged down in Korea, the UK Nuclear Arsenal made sense, as did the extreme reaction to those, like Jeremy Corbyn and the Unilateral Disarmament movement, who wished for its abolition. It was absolutely vital to providing a deterrent to attacks on UK cities. If the UK could not completely annihilated the Soviet Union, an arsenal of a bit over a hundred warheads was more than enough to make a nuclear bombardment not worth the cost, and in the event of World War III, to get Britain the same sort of deal that would be otherwise be left to the United States. Rather than stopping at the Atlantic, the Soviets would stop at the English Channel and agree to a status quo peace. The French Arsenal was designed to a similar purpose, to increase the costs astronomically, not of a decision on the part of the Soviets to advance in Germany, but of a decision of the Soviets not to halt their advance on the French frontiers. Everything about both arsenals, most prominently the fact that they are submarine based, and therefore theoretically invulnerable to a first strike on the homeland, was designed to ensure they could deter exactly that.

As to the United States, American leaders, frustrated by the refusal of the European powers at any point to pay a fraction of the cost of a conventional military force capable of resisting the Red Army, were overjoyed with the creation of additional trip-wires which rescued them from the political morass of repeated demands they guarantee nuclear retaliation for Soviet advances in Europe. The French deterrent would either stop the Soviets earlier than a UK deterrent alone, which in turn would stop them earlier than existence of the American arsenal, and in the event it failed to do so, cripple the Soviet Union in the resulting nuclear exchange to such a degree it would no longer pose a threat to the next country in line of attack. Hence the American enthusiasm.

If this seemed to a degree self-serving, that explains some of the motivation of the supporters of the Campaign for Nuclear Disarmament. But make no mistake, they adopted their position not because the Nuclear Arsenals were of no value, but because they like, like their predecessors in 1940, feared the risks of deterrence failing to such an extent that they preferred immediate surrender to the invader to the risks of resistance. They were not humanitarians, unless favoring the Gulag makes one into such, and their suggested policy created huge potential collective action problems. If, France, say was to adopt the left-wing policy of immediately surrendering, trusting in the British to annihilate the Soviets in a mutual nuclear exchange, and the United States to then liberate them, the incentive would then be on the British to do the same, and the elimination of the independent deterrents would result in a situation in which any Soviet attack would be followed by the rapid and bloodless surrender of Western Europe. Contrary to the expectations of its advocates, rather than encouraging America to save them this policy would have the exact opposite result, providing a guilt-free justification for the United States to make a separate peace abandoning Western Europe to the KGB.

It is in the circumstances of this scenario that Jeremy Corbyn's opposition to Trident and Nuclear Weapons has to be understood, because it was in this context that he most loudly and voraciously advocated for his policy. The mistake his critics make today is the same his supporters do in his defense; to evaluate his positions in the Post-Cold War world. But the important fact about Corbyn is not that he thinks Trident is an unnecessary expense today when it may well be of less value; it is rather than he though it was immoral when it was absolutely necessary for the security of the United Kingdom, and in effect he was an advocate of submission to Soviet rule rather than the risks of resistance.

Does this mean that Trident is necessarily a hill to die on now? Perhaps not. The Cold War is over. The enemy if it exists is ideological, Radical Islam, and its proponents are either abroad in the Middle East, or already in Europe, embedded as fifth column within communities with which Corbyn is close. In neither case are nuclear weapons particularly useful. Granted, Osama Bin ladin reportedly ruled out the use of nuclear weapons or dirty bombs out of the belief that the United States would retaliate by nuking Mecca, but while a plausible response from Americans, it seems incredibly to the point of lunacy that a British government would respond to an attack, even a nuclear one, in that manner. Russia, while far from a paper tiger, has no ability logistically to drive to the Oder, much less the Rhine or English Channel. So there is an open question of who exactly one would deter with a nuclear deterrent.

Make no mistake however. The basic rules of self-interest that made Trident necessary in the Cold War still apply. The United States guarantees to Britain even under the most pro-British Administration imaginable do not extent to using its nuclear arsenal against a power that can retaliate against the continental United States. The US might well nuke Tehran if Iranians set off a bomb in the UK. They would not nuke Moscow if the Russians did so, or Beijing if the Chinese were for some reason to feel so inclined. The only nation that feel the defense of Britain is worth destruction are the British themselves, or at least some of them. Trident's value then has decreased only because the international waters appear calmer between states. It is still the same game.

Trident then is in many ways an investment in the future. Its value as a deterrent has decreased due to the absence of a threatening foe to deter, rather than its own lack of value. The Royal Navy arguably lacked much deterrent value in the 1860s, but that did not mean it should be abolished. A decision to do so would have made it hard to restore if circumstances changed. Perhaps ships could be rebuilt, but could crews be retrained, talent lost or never created somehow be summoned when needed?

This does not mean abolishing Trident makes no sense in terms of savings, but the decision should be based on the likelihood of a new threat arising and the difficulty of recreating a Nuclear deterrent if it is abandoned now. And the danger lies in allowing a man such as Jeremy Corbyn, who opposed Trident not because it was unnecessary or ineffective, but because it was absolutely necessary and effective, who wanted to surrender to the Soviets immediately in the event of a Third World War, and likely would have given up to Hitler in 1940, to make such judgments. His judgment on such matters is at best impaired. At worst pathological, a latter day Ben Greene.