Why not break up Bosnia? 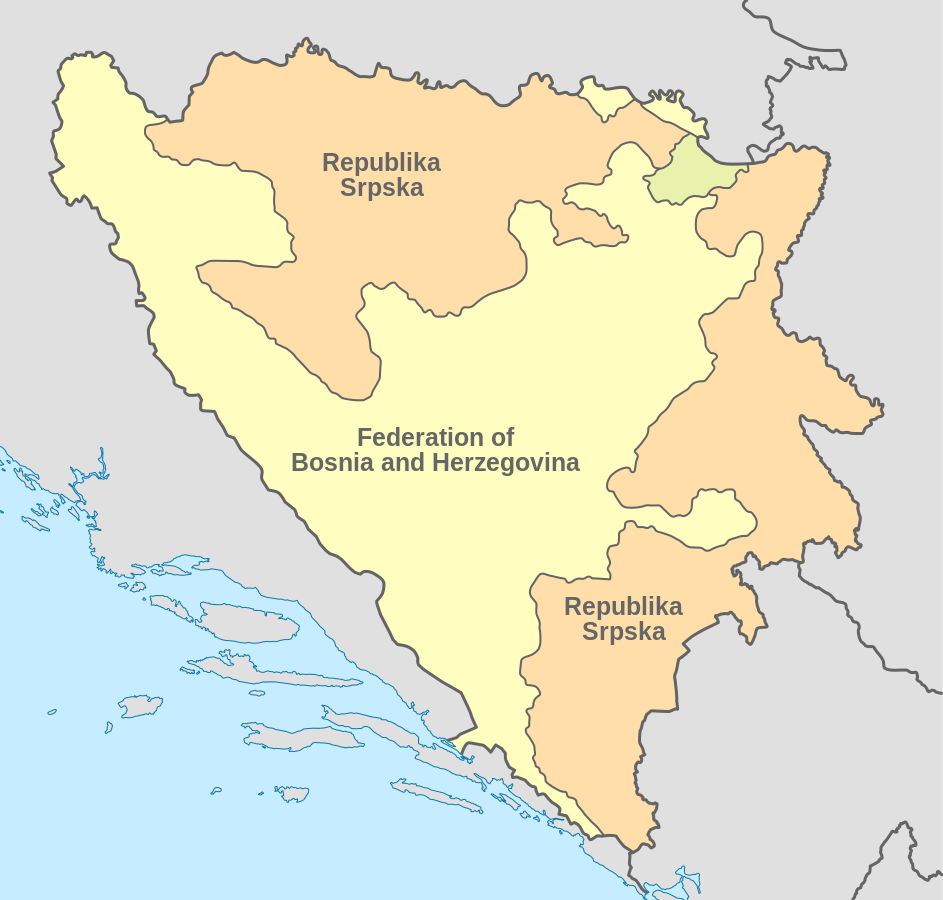 Spotting future geopolitical crisis is the bread and butter of the armchair analyst crowd. In a field made up of regional specialists, there is no better way to promote one's own importance than to promote the idea that your area of expertise is likely to become valuable. If you are lucky, events will prove you right. Otherwise, you can try and jump on the bandwagon for other threats. Hence how it is being argued that Venezuela's political crisis is partially about the expansion of Hezbollah operations and Iranian influence to the Americas, or that the hand of Russia is behind developments from Brexit, to a coup in Montenegro.

One charge in particular has been to lay the blame at Moscow's feet for the recent increase in tension within Bosnia-Herzegovina, where Republika Srbska Prime Minister Milorad Dodik is threatening a referendum on secession, has been sanctioned by the US Department of State, a policy continued by the Trump Administration despite Dodik's claim of an invite to Trump's inauguration, which he alleged the Obama administration blocked. This gives Moscow too much credit. In Bosnia, the parties themselves are more than capable of stirring up tensions on their own. Dodik has been threatening a referendum over the Dayton constitution for more than a decade, while Bosnia's government has filed a suit against Serbia over its support for genocidal actions during the 1992-1995 war over the objections of the Serbian President of the country, an ostensible moderate who won. Dodik himself was a moderate when elected, having first entered politics as part of multi-ethnic and pro-western Union of Reform Forces in the 1990 Bosnian elections, before taking a turn towards nationalism when he came to power. His counterpart in the Muslim-Croat Federation of Bosnia-Herzegovina cannot claim that degree of distance. Bakir Izetbegovic, the Muslim representative on the tripartite Presidency is the son of Alija Izetbegovic, who as the leader of the Party of Democratic Action led Bosnia to independence from Yugoslavia and into war. At the time, one of the motivations for the war was fear among Serbs and Croats, who made up 33% and 17% of the population respectively in 1991, would be dominated and subjected to Sharia law by the Muslim community, which made up 46% in a unitary state. Whether despite or because of the war, many of those fears of links between the SDA, and the de-secularization of the Muslim population have been realized.

In short, twenty-two years after the Dayton Agreement ended the war, the peace that followed has failed to bring Bosnia's distinct ethnic groups together. If anything, it has enshrined those divisions. The Serbs, who sought to avoid being a minority in someone else's state, find themselves still imprisoned within the internationally recognized borders of a shared Bosnian state. That is the greatest, and one might argue, only victory the Muslim Bosniaks have achieved. A united Bosnia continues to exist, but its functioning is crippled both by the weakness of the central government, and the obstructive tactics of a minority that does not want the country to work because they do not want to be part of it. The result has been a standoff. The Bosniaks have been able to defeat Bosnian Serb aspirations for independence, but the Serbs in turn have managed to defeat every Bosniak effort to make that state functional or efficacious. And if Serbs and Croats had reservations about sharing a unitary state with a strong central government with a Muslim plurality in 1992, those objections are even stronger today. The 2013 census revealed that the prospective Muslim majority, fear of which drove the Serbs and Croats into seeking self-determination for their own communities in 1992, had become an actual majority.

The losers have been, well, almost everyone. Refugee return, enshrined in the Dayton Agreement, is obstructed by violence enabled by the willingness of voters to support those who violate the agreement in spirit and to remove those who genuinely work towards its implementation. Economically Bosnia is a basket case. Unemployment was at 44.5% in 2015 according to the World Bank, while 40% of the population lived below the poverty line. Both the center of Yugoslavia's inefficient heavy industry and defense sectors, where ethnic quotas added to the intrinsic inefficiency of a command economy, Bosnia was a budgetary blackhole even before independence. War only added to it, while peace not only enshrined ethnic quotas, but saddled the state with a government incapable of reforming regulatory rules, or fighting mafia control of much of the economy. It is no surprise that Bosnia has become a recruiting ground for Jihadis, and a major stopover on human trafficking routes into Europe.

The solution to these problems have been seen to lie in foreign aid, and the reforms needed to make it effective. The latter have depended on having a strong government. The international community has tried to bypass the limits of the Dayton constitution by utilizing the power of the High Commissioner to rule by decree, overturning court judgements, banning politicians, parties, and media outlets, and in some cases changing laws. The results have been mixed. While these efforts have strengthened the unified state on paper, they have made Croat and Serb obstruction insurmountable, as they see their participation in a joint state has having been conditional on their ability to block any initiatives by the now majority Muslim population that threaten their interests. The efforts of the international community to make Bosnia's government functional have had the consequence of making the state ungovernable except through outside fiat.

The current system, then, clearly is not working. What then are the alternatives? International actors, as committed to the idea that a multiethnic Bosnia can work, and that multiethnic states must work, as they were in the 1990s, fantasize about going further along the path they have already trod, and establishing an efficacious central government by fiat. That cannot work, given the opposition of Serbs and Croats, unless it is a Muslim majority government, in which case not only the Serbs, but the Croats too would seek secession, though the latter, gifted with EU citizenship, have largely already voted with their feat. The only way to enforce such a settlement would by use of force. It is unclear if there is will enough in the international community to carry out such a program, especially in the current climate where it would be easily spun as using military coercion to force a Christian population to accept Islamic rule. Absent such intervention, the problem on the ground would not be a reluctance on the part of the parties to resume fighting, but the eagerness with which they would take part. 45% unemployment leaves a lot of unemployed young men.

Absent that option, it is unclear why the opposite extreme, partition has been rejected. In the 1990s, it was rejected out of hand due to an ideological commitment to consigning religious and ethnic homogeneity to the past, as well as fears that there was no way to draw contiguous and viable borders. Those borders, were, however, drawn on the battlefield between August and October of 1995, and the Dayton agreement kept a common state both to allow the international community to declare victory, as well as out of the hope refugees would be able to return home. Some, arguably a greater number than wiser heads predicted in 1995, have done so. Nonetheless, both entities remain homogenous. Returnees face local hostility, as well as the fact that the absence of economic prospects anywhere tends to mean it is easier to find work where one's ethnic group controls government employment which makes up nearly half of all jobs. According to the 2013 census, the first conducted since the war, the Serbian Republic has a population which is 81% Serb, 14% Muslim, and 4% other compared with 55%-28%-17% in 1991. The Federation, by contrast, is 71% Muslim, 22% Croat, and only 3% Serb. It is argued that independence would reward ethnic cleansing. That might have been a viable argument in 1995 when ethnic cleansers were still in power, but today the result is to punish everyone by denying the Federation effective government, and the economic development it is a prerequisite for, and the Serbian Republic independence. The other argument, that Bosnia is an integrated entity, may have been true in 1991 but is less true today. In any event, freedom of movement is currently enshrined in the Dayton settlement, and any post-Dayton partition could require that to be maintained.

By contrast, breaking up Bosnia would give everyone something. The Muslims would lose the mythical prospect that one day they could dominate a centralized state encompassing all of Bosnia, but that has always been an undesirable goal, poisonous to Muslim politics in Bosnia and to their relation with other groups. By contrast, a Federation freed from the vetoes wielded by the Serbian Republic could carry out economic reforms with the full support of the international community which would improve individuals' lives today. It could also be placed on a fast-track to EU integration. By contrast, an independent Serbian Republic would bring security to the Serb population which would allow nationalism to be removed. It could also be traded, especially in the event it sought union with Serbia, for a resolution of the Kosovo conflict.

Minority rights in both entities are already effectively guaranteed by the international community. The conditions set for Serbian secession could and should include a real embrace of individual civic equality, something that should be less threatening when the prospect of independence looms in a state which is more than 80% Serb. That would potentially guarantee a better position for Muslims within the Serbian entity than they presently enjoy. The achievement of independence would remove the national issue from Serbian politics both within Bosnia and Serbia itself, especially if paired with a resolution of the Kosovo issue.

The only real losers under such an agreement would be the Bosnian Croats. Ultimately, however, they are the smallest group, 15% of the population, and have the most options, being entitled to Croatian, and hence EU citizenship. A dependence on foreign aid and hope for EU integration would act as a restraint on the Bosnian leadership for sometime, and in the worst case it is preferable to the current situation in which everyone except the criminal underground loses.

It is unclear why after 22 years the West is so wedded to a policy which has failed, such that it sees its role as bullying the parties into continuing in an intolerable situation. Partition, regardless of the actions of those who advocated it in the 1990s, is worth considering and should not be dismissed out of hand.