What if there was an election, and it was about nothing at all? The issue free Labour leadership contest. 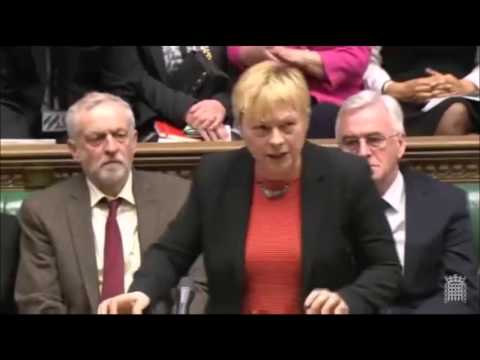 It probably is not an auspicious sign for a candidate if the launch of their party leadership bid is overshadowed by Star Wars memes. Which makes the decision of Diane Abbott, Labour MP for Hackney North and Stoke Newington, to dub Angela Eagle the "Empire Strikes Back" candidate, another chapter in the long debate about whether Abbott is an unrecognized political genius, or merely a very lucky moron. The comparison, far more interesting than Eagle's platform, which consists almost solely of not being Jeremy Corbyn, had dominated coverage and helped set the tenure for Labour's long-awaited leadership election.

On one level, the Star Wars jokes are just a bit of good fun. That said, they also testify to a deeper problem afflicting the Labour party. For all the talk of Jeremy Corbyn's political tone-deafness, his opponents have been remarkably inept at controlling the wider political narrative. Whether it was allowing themselves to be branded as "Blairites" with Blair's known unpopularity in the party and Chilicot hanging over their heads, or allowing their efforts to be consistently termed "coup plots", Corbyn's opponents have shown little interest or ability in attempting to make their conflict with the Labour leader appear to neutral observers as anything other than a factional conflict. The most recent manifestation of this came in the form of the debate over whether or not an incumbent leader faced with a challenge should have to collect the same number of signatures from MPs to be placed on the ballot as any other candidate. What could have been framed as an unfortunate but accurate reading of the party rules instead has been sold as a method of keeping Jeremy Corbyn off the ballot, with the twin implications that his opponents lack the ability to beat him in a fair fight and that they have therefore found a clever means of cheating. This ineptness is all the more shocking when coming from a political tradition that grew up worshiping the sort of "spin" at which Blair's operation excelled, and made the Thick of It the favorite television show of a generation of aspiring politicos.

This lack of quality spin is not necessarily going to decide the Labour leadership, especially if Corbyn's opponents are successful in preventing him from appearing on the ballot which will be presented to the membership, but it is going to have enormous implications for how the new Labour leadership is viewed by the wider electorate. Will those sticking the knife into Corbyn be seen as patriots risking their political careers to save their party and country? Or rather, will they be seen as right-wing ideologues purging a left-wing foe, or even as one group of politicos fighting for advantage at the expense of another? I bring this up because ultimately the Labour party is going to have to explain itself to a wider electorate whose concerns are not just ideological, but also pragmatic. Could a Labour government actually successfully govern the country in uncertain times? That case is going to be hard to make when the Labour party is unable to govern itself.

At the moment, the answer to that question appears to be No, and it is unclear if a change in leader would have much impact on that. For one thing, I, a fairly politically engaged individual, genuinely do not fully understand what the internal civil war within the Labour party is about. By that I don't mean that I am unfamiliar with what various sides claim it is about. I am no friend of Jeremy Corbyn ideologically, and could not imagine myself supporting him, either for party leader or Prime Minister, but he was elected by the membership overwhelmingly. The MPs clearly believed, as I did, that he was a dreadful choice to lead the Labour party last summer, and they still believe that now, but I am unclear as to what has changed since then that justifies his removal from office midterm.

The charges against Corbyn appear to be that he polls poorly, is unlikely to win a general election, holds extreme positions, and lacks the support of MPs. All of these, however, were true at the time at which he was elected. The Labour party is polling poorly today, generally 4-5% behind the Conservatives, but it is polling about at the same point at which it was a year ago. It is furthermore unclear if under anyone else the Labour party would be polling substantially better. Definitely Corbyn has not brought the party down to a level at which it is danger of coming third, which Iain Duncan Smith did during his tenure as Conservative leader. Corbyn obviously holds objectionable views on the Middle East, the IRA, and a host of other issues, but he was quite open about those last year as well and nonetheless was elected by the membership. The final charge is that he cannot lead the party as he lacks the support of a majority of MPs as proven by the recent vote of no-confidence. But Corbyn never had the support of many MPs. He was placed on the ballot with the support of only 36 MP, some of whom did not in fact support him. Ironically, the support he received in the no confidence motion from 40 MPs, represented four more votes than he received in the initial contest last summer. The only reason he is in danger of not making the ballot is because the threshold increases for challenges against sitting leaders from 15% of the caucus to 20%.

For all of the above reasons, the effort to remove Corbyn looks very much like the work of a Westminster Labour caucus that never wanted him as leader, resented the membership vote to install him in that position, and has been determined from the start to rectify that mistake. If one agrees with that position, as I suspect I might if I were a Labour supporter much less a Labour Mp, then I assume it is perfectly acceptable as a motive, but for an outside observer, it seems that having decided to allow the membership a voice in choosing a leader, Labour MPs were obligated to at least try to work with him absent some particularly egregious offense on top of being Jeremy Corbyn. And while Corbyn certainly has not been a success as leader of the opposition, it is unclear to me whether he has committed any offense beyond that of being Jeremy Corbyn in his capacity as Labour leader. Labour MPs, therefore, come off as being unwilling to accept anyone not of their own choice.

Some of Corbyn's foes appear vaguely aware of the optics of this situation, and have sought to remedy it with specific charges. The most prominent was that Corbyn "sabotaged" the campaign to remain within the EU. While this line was effective with Labour supporting media outlets which overwhelmingly were cosmopolitan and therefore strongly in favor of remaining within the EU, it faced a number of problems, first and foremost the lack of any sort of smoking gun. At worst, Corbyn appears not to have done all he could for the Remain campaign, but there is little evidence he actively "sabotaged" it and given his long record of Euroskepticism it would seem unclear if more could have been expected from him. Perhaps more problematic is the fact that challenge facing Labour, the one Corbyn's critics assert he is poorly placed to resolve, is that of winning back traditional Labour voters who cast ballots to leave the EU. While an explicitly pro-EU line in favor of tossing aside the referendum results might well have provided a Corbyn challenger with a compelling, honest, and clear platform, it would have conflicted with the very arguments about electability that form the basis of the charges against the Labour leader. And it would have left the challenge looking as if it was less about Labour's prospects in the next election, and more about personal hostility to the idea of Corbyn placing his ideological stamp on Labour.

All of this is to some degree inside baseball, to use an American colloquialism, but it is inside baseball at a time when inside baseball is deeply unpopular. Michael Gove recently discovered that as much as political hacks and reporters enjoyed House of Cards, no one wanted to actually vote for someone who looked as if they could have starred in it Labour is in serious danger of undergoing the same crisis Democrats did in the early Bush years. Then, as with Labour now, the party went through a crisis of confidence, and then, as of now, an urge was felt to have the discussion over strategies to win back power in public by way of the media. To what should have been no one's surprise, it turned out in 2004 that demographic groups found it patronizing for politicians to discuss how best to get their votes in front of them, and voted against a party which in 2004 appeared to place getting power ahead of any thought of what to do with it. Then, as now, there was a rush to embrace quick fixes and rhetorical tricks that would allow the party out of power to "frame" their way to power. For the Democrats, the answers came from George Lakeoff, a Berkely Professor of Linguistics, and from Thomas Frank, who argued that conservatives used cultural issues to sway working class voters into opposing their own economic interests in his book, What's the Matter with Kansas? For Labour, it is to return to the tactics that worked so well during the early Blair years, and on the TV shows they love so much. There is no greater credit than can be given to the Thick of It, which features PR operatives managing incompetent Ministers than the decision to front as the leader of the anti-Corbyn campaign a woman so indistinct that Tony Blair sacked her by mistake.

The Labour leadership is not about issues. It is not about different views of Brexit. It is about personalities, and unlike the Tory contest, not even interesting ones at that. It is no wonder the media fled Eagle's announcement to attend Andrea Leadsom's withdrawal. Removing Jeremy Corbyn may well be a prerequisite to regaining power, but figuring out why Jeremy Corbyn should be removed, and what a Labour government would do with power is probably a prerequisite to a successful coup. And right now, no one seems interested in that part.