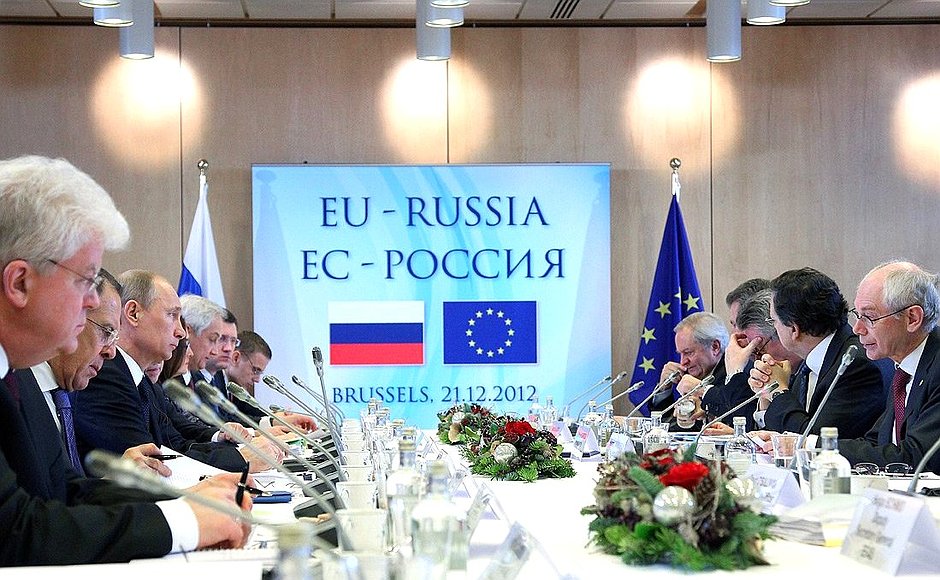 I have talked a lot about timing and schedules, not least because I am convinced they are as vital in international politics today as they were in the 19th century - if anything the increased pace of communications and transport have made timelines shorter.

But the long-run still matters as much as the short-run, and with the increased importance of economic versus military pressure, economic cycles themselves increasingly determine national strength and hence the outcome of conflicts.

The behavior of the European Union and its two most prominent states over the last week illustrates this principle to the hilt. With the benefit of hindsight, its clear that military action was never really on the table at any point absent Russian forces reaching the Polish border, and therefore from the very start, any conceivable European response would have needed to come in an economic form, where the EU holds a substantial superiority over the Russian Federation.

Despite the mockery sanctions have often received, and the well deserved mockery those imposed yesterday have earned, there was a prospect of serious sanctions imposing real costs on Russia- costs potentially sufficient to force Putin to reconsider his tactics if not his goals.  As a resource-heavy economy, Russia is dependent on energy sales to Europe. Furthermore, its infrastructure is organized in such a way that its access to alternative markets is limited. Designed to get fuel to Europe, Russia cannot simply ship it across 3,000 miles of limited road and rail routes in order to sell it to China, nor does it have the port access or shipping capacity to get it to the world market except through Europe. With a national budget set to go into the red without $85 a barrel oil prices, Russia was uniquely vulnerable to a boycott, which would leave it genuinely unable to sell the product on which its economy depends.

Yet if Russia was vulnerable, so were the two key players in the EU. Not in the traditional economic sense. Germany has extensive foreign reserves which it could have used both to purchase fuel from alternative sources on the international market and to subsidize it for domestic consumption. With extensive port facilities, Europe would have little trouble acquiring Middle Eastern, African, or American fuel. The cost would have been high, perhaps a 22% rise in fuel costs, but it would have been nationally bearable.

It would not, however have been politically bearable. Both the British Conservative Party of David Cameron and the German Christian Democrats under Angela Merkel have staked their political legitimacy on a particular vision of austerity and the belief that this austerity can bring economic growth, the former to Britain, the latter to the Eurozone as a whole. In particular Merkel has enforced her vision of belt-tightening not just on Germany, but on much of the EU including Greece and Italy. In return, the results achieved by both governments have been mixed. The UK is growing again, but only at a rate of about 2.4%, with Germany a bit lower.

That number is critical. Sanctions would almost certainly hurt, likely to the tune of around a 0.8% haircut in GDP growth over the next year, especially without extensive stimulus spending. Critically, however, either option would undermine the legitimacy of the governments implementing them. A Keynesian approach would make a mockery of the policies followed hitherto and lead to resentment against Germany, while allowing that sort of haircut would eliminate the limited growth both economies have achieved. In the UK it would discredit Chancellor George Osborne, and almost certainly lead the Tories, already substantial underdogs for 2015, to electoral doom.

For Germany the stakes are even greater. Having invested enormously in keeping the delicate Italian, Spanish, and Greek economies afloat, the Germans must be aware that economic problems are also political problems, and that such a haircut might force one or all of those economies over the edge, destabilizing the EU. In this circumstance its understandable that Merkel would be loath to risk such an eventuality.

Economic Cycles and the Balance of Power

Putin is being far more aggressive right now because he understands this current weakness of the EU, and likelihood that the United States cannot act out of concert with its regional allies. Yet he is also driven to a far more aggressive stands in the Crimea by an understanding that the situation is likely temporary. Russia remains far more vulnerable to sanctions than the EU, and would remain so if Europe were enjoying 4-5% economic growth. Yet in that scenario, European leaders would probably be far more willing to pay the serious price of sanctions, which would fall  in a comparatively lighter manner on their populations.

It is possible that Europe is in terminal decline owing to falling birthrates and an outdated welfare model as some observers say, but Putin can't bet on that and rightly so. It seems far more likely that at some future point Europe will have fully recovered, and therefore be more willing to confront him or his successor. At that point, any treaty structure in the East based on Crimean autonomy that he has constructed in a time of weakness will collapse as quickly as the Versailles settlement, similarly constructed out of artificial German weakness, did the moment Germany recovered.

This should explain the speed with which Putin seems to have veered towards annexation of the Crimea. He knows that the current economic weakness of the EU presents a once in a lifetime opportunity for Russia to do what it wants in the East. If he uses that opportunity to annex the Crimea so that it is an intrinsic and legal part of Russia when Europe recovers, its unlikely that Europe, no matter how secure, will actually advance territorial demands on Russia, or back such demands from the Ukraine. But if that recovery takes place in an environment where the Crimea remains nominally under Kiev's rule while functionally autonomous, Brussels will be tempted into a Georgia 2008-esque situation in which the EU uses economic pressure to neutralize Russia while Kiev retakes the peninsula.

In the Long-Run Everyone is Dead

John Maynard Keynes famously made the above remark when endorsing government stimulus, but in the new world of international relations perhaps it should be taken literally. Given that economic weakness will increasingly lead to political weakness, governments are going to have to considered whether economically sound concepts such as austerity are worth the temporary weakness they will entail, weakness that other powers can take advantage of. Or should they run up large debts through Keynesian stimulus in order to maintain their international position in the short-run, even though it may weaken the long-term underpinning of their economies. The crisis in the Ukraine should cause these questions to be raised, but Putin at least is not taking chances. He is taking his opportunity and running with it.