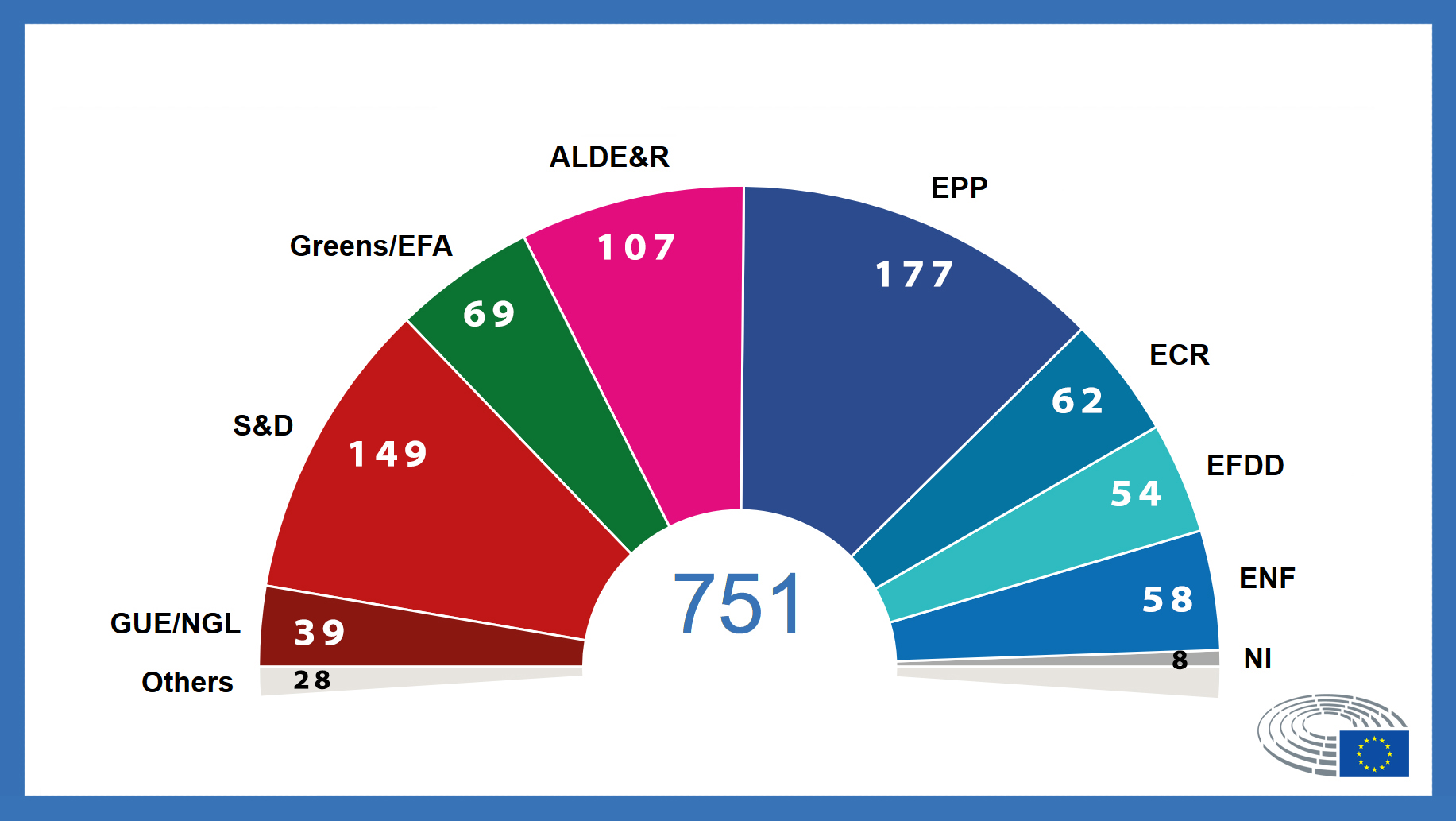 I have divided these into two segments. The first will deal with Europe as a whole, the latter with the United Kingdom specifically.

There was never much prospect of a Far-Right Takeover

While much was made in the media of the prospect these elections might result in a surge of support for Euroskeptics, this was never hugely likely, or at least not enough to matter. The combination of the proportional electoral system, and the generally inverse strength of many of those parties to the size of the countries in which they operate, meant that any gains would have a marginal impact. The major influence the AFD in Germany, the various Le Pen outfits in France, Vox in Spain, and even UKIP in the UK have had on domestic politics has been to complicate government formation on the right. In Britain this forced a referendum on Brexit, the fallout of which has swallowed the entire political system, but only because UKIP forced Labour and the Conservatives to legislate things that UKIP never could. Given that the major division within the EU is on federalist lines, being forced to potentially seek a coalition with Socialists or Greens is far less of a difficult choice for Center-Right parties than it is domestically.

Turnout was up to "Normal Levels"

The European elections that were concluded on May 26th saw the highest turnout since 1994, topping 50% across the continent, reversing a downward trend that had gone on since 1994. In fact, this is the first time turnout has ever increased for European elections. Was this in response to fear's of a far-right surge? Observers have been quick to draw links. Turnout increased, there was no far-right surge, so they must be connected, and in some places they clearly were. In the UK, turnout in London was almost 10% higher than it was in the Northwest, and it was consistently higher in areas which voted to Remain in the 2016 referendum than in areas which voted to Leave. Yet this is too simple

The real impact of turnout seems to have been to cause a convergence between results in the European elections, which in many countries have functioned as a midterm protest vote, and voting patterns in general elections. Low turnout exacerbates the impact of discontent, as the angrier voters are, the more likely they are to turn out in order to cast symbolic votes to demonstrate it. While, say the AFD in Germany did not make a breakthrough with only 11% of the vote, that is almost exactly in-line with its polling average. Marine Le Pen's National Rally polled 23.5% and both she and Macron's party did about 4% worse than they are polling for President in hypothetical first round polls. The Swedish results are remarkably similar to those of the recent general election. All of this is why the results in Poland, which has a general election later this year, and Italy, which may well, are so worrisome to many. Both indicate that ruling parties are well placed to win. Which brings us to a third point

Results were driven by national factors

There is a concession that Italy was the "exception" to the general poor performance of the far-right, but there is another difference. Italy has a far-right party which is in power and popular. The far-right parties, or parties which get tagged with it(mostly in Eastern Europe) that are in power generally performed in line with their domestic strength. Not just the League in Italy, but Fidesz in Hungary and Law and Justice in Poland. The parties which are protest vehicles, ie. are not in power, have never been in power, would never be considered as viable coalition partners for power, and are dominated by provocateurs - the PVV in the Netherlands, the AFD in Germany, and borderline National Front in France, under-performed insofar as there was no over-representation of protest votes. Even in opposition, the Swedish Democrats, who are in contention to be part of a future government, did on par with their best ever general election performance, winning 16%. Britain too can be explained by domestic factors, albeit, domestic politics there has been entirely consumed by relations with the EU.

As such there are a few inferences that can be drawn

France - Marine Le Pen has not managed to break out of her "lane" in terms of support. Her 24% is slightly down on the 25% her party won last time. At the same time, that drop occurred simultaneously with the collapse of the center-right Republicans from 20% to 8% support. If Le Pen cannot reach 50% in a run-off against Macron or anyone really, and the center-right has no chance of coming ahead of her in round one, then quite simply Macron has nothing to fear from the right at all. His only threats come from the left, and his strategy to hold off those has hitherto been to threaten them with a steadily less plausible far-right alternative.Germany - Ever since Merkel stepped down, the surge for the AFD has crested. That is despite Merkel's success in ensuring the selection of a protege as successor. The AFD was always a mess internally, ranging from Nazis, to Alt-Right elements, to CDU/CSU voters using it as a tool to try to force Merkel from the leadership. Merkel's pledge to step down has not changed the government's policies, but it has done something more damaging to the AFD, namely it has left those who supported it as a pressure group without an objective. What more do they want? Not to vote for the AFD for its own sake evidently.

Spain - The Spanish Socialists continue to the winning streak that began with their ousting of the Rajoy government last year and continued through their risky decision to force a general election rather than appease separatist parties even though they were far behind in the polls. A popular vote plurality of 44% to 43% for the Left in the general election a month ago has been transformed here to a 45% to 37%. Likely due to disillusionment. The right still hell Madrid in the local elections held on the same day.

Sweden - Swedish politics has been in a holding pattern since the elections last fall which produced a deadlock. The center-right Alliance and the center-left were tied in seats, with the Swedish Democrats winning 17%. The Alliance then split over whether to form a government with support of the Swedish Democrats or to allow the left to continue in office. Given the Alliance had already propped up a center-left minority since the preceding election this seemed to hold out the prospect of indefinite left-wing government. The Center and Liberals refused to work with the Swedish Democrats, while the Moderates and Christian Democrats were willing to do so. The combined vote of the Moderates, Christian Democrats, and Swedish Democrats amounted to 40.9%, that of the Alliance 40.4%, and the center and left 40.7%, not really resolving the deadlock. Though it is worth noting that the total for the Moderates, Christian Democrats, and Swedish Democrats is up almost 11% on their 2014 total. Poland - The ruling Law and Justice party, which has faced charges of rolling back democracy, won 45.38%, while an alliance of virtually all opposition parties won 38.47% and the left-leaning Spring movement won 6%. That was enough for Law and Justice to win 26/51 seats. Poland has elections later this year, also fought with a proportional system, and given the turnout of 46% here a similar result would not be unexpected. If so, it too would likely be enough for a small Law and Justice majority over the combined opposition given Poland's 5% threshold for representation.Hungary - Fidesz won 52.33% enough for 13/21 seats. That is up on the 49% Fidesz won in the 2018 general election.The major development was the implosion of the far-right Jobbik. By contrast, centrist, liberal, and leftwing parties managed to win 33%.. better than their 29% total in 2014. If they can unite there is a road back for the opposition which has suffered from divisions and infighting.

Italy - The Liga party of Matteo Salvini won 34.33% of the vote, while its southern far-right ally, the Brothers of Italy won an additional 6.46%. Combined, that might get them close to a majority in a general election, and when support is added from Silvio Berlusconi's Forza Italia, a right-wing alliance took around 50% of the vote. The center-left Democratic party marginally recovered to 23% but their major achievement was coming ahead of the populist Five Star Movement on 17%, down 12% from what they took in the last general election.It is constantly rumored that Salvini will bring down the government, but as long as the Five Star Movement is willing to effectively allow him to do whatever he wants in it to avoid a new election, Salvini is better off keeping it together. He can take credit for all of its popular achievements while blaming its failures on his coalition partners. The longer this lasts, the weaker the Liga's rivals on the right become.

Greece - It is not really news that Syriza ended 9% behind the center-right New Democracy party. It reflects several years of polling.

Austria - The Austrian results may have been the most important on domestic developments. Despite his party coming first with almost 35% of the vote, the results ensured that Chancellor Sebastian Kurz lost the vote of no confidence held on Monday. Why? Because the far-right Freedom Party, despite a scandal in which its leading figures were filmed accepting money and plotting with Russian agents and then evicted from the cabinet by Kurz, managed to hold their own and win 17% of the vote. While below their 24% in the last election, it is not far below the 21% or so they were polling before the scandal and indicates they won't be wiped out, and in turn that Kurz's OVP is unlikely to absorb their voter base to reach the mid-40s which would allow him to govern as he chooses. Consequently, it appears to have emboldened them to join with the opposition Socialists to topple Kurz's caretaker government.