The United States and the EU Referendum 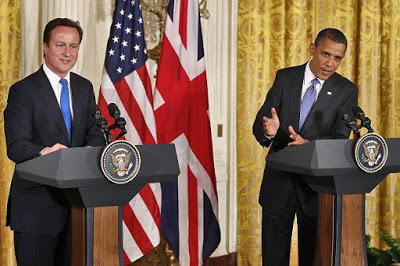 Obama's intervention in the UK referendum campaign dominated headline coverage this weekend, both on the symbolic level(Boris Johnson's comments tying Obama's position on the EU to his part Kenyan ancestry) and on a substantive one(his warnings that the UK would not be moved to the front of a line for a free-trade deal with the US). The result was to lead Nigel Farage to proclaim the past week the single worst in the history of the Leave campaign. That conclusion was quickly embraced by a media that has never understood Leave supporters and therefore concludes every event or development will harm their cause. That was evident in the coverage by the BBC, which heavily played up Obama's remarks and less committal ones emerging from Hillary Clinton, and completely ignored statements from Republicans Ted Cruz and Donald Trump which contradicted the position laid out by Obama, namely that the US should not involve itself in the referendum, and that moreover the US should always seek to be supportive of the UK.

To grant coverage to the latter would have done two things. The first, always hard for many outside observers, would be to acknowledge the possibility that a Republican might be President in 2016. The other would be to recognize that the United States is not monolithic. But just as the UK media speaks for the UK educational and cultural elite, which with the exception of a few politicians is monolithic on the referendum, so too is Obama speaking for a set of professionals, mostly democrats, who see the major US priority being in encouraging economic development as an underpinning of stability. Rejecting the importance of issues of ethnicity, religion, or nationality in terms of conflict, they see every conflict and problem as deriving from a lack of economic opportunity, and it is easy to see why to them the case for Britain to leave the EU is inconceivable. It would impose macroeconomic costs on the EU, the UK, and the United States, all for the purpose of remedying concerns they reject the legitimacy of.

It is worth noting that there is an element of truth to the Leave criticism of Obama's remarks. While virtually the entire United States political spectrum supports NAFTA, it is highly unlikely NAFTA ever would have been approved if it involved free movement between the United States and Mexico. And such a clause was excluded from NAFTA for good reason. But someone like Obama, who favors amnesty for those who have come to America illegally in any case, probably would oppose such a proposal on the basis of politics rather than principle.

However true that may be, it is far from the most relevant complaint the Leave campaign is justified in making, which is that Obama's trip revealed something obvious. Whatever the merits of leaving the EU are in abstract, the actual ability to successfully do so ultimately depends on the attitude of the United States, which contrary to the BBC coverage is not necessarily pro-Remain, but is necessarily determined by the identity of an American administration. Regardless of whether Obama is anti-British or not, the fact is that the Republican social and foreign policy elite is vastly more anglophile than their Democratic counterparts, a view shared by their base. More importantly, Republicans are fiercely anti-EU, suspicious of the loyalty of mainland Europeans in any case due to experiences in the Cold War as well as over Iraq and more recently Israel, and it would be impossible politically for any Republican Administration to take a position in favor of Britain remaining in the EU.

Hence the importance of the referendum being held in 2016 rather than 2017, when there might well be a Republican Administration which would make "America's Position" very different from what it is today. Much as few efforts have evidently been made by the Cabinet for the eventuality of a Brexit, every effort was made to hold the referendum in circumstances in which a Brexit would be as  difficult and painful as possible right down to an American President who was known for a fact to be opposed and willing to say so.  That in turn, has left the Brexit campaign forced to either align itself with the Republicans who are unpopular in Britain, or to attack Obama personally who is.

Lest one be too quick to praise the cleverness of Cameron and Osborne, it is worth noting that a consensus in favor a Brexit being a bad idea right now, is a dangerous eventuality. For one thing, the more that Brexit looks like a protest against the EU and political establishment instead of a viable policy option, the more likely it is that protest voters will support it safe in the knowledge it will not happen. Furthermore, there is anger among Brexit supporters that they have been tricked and treated with contempt, not least because both are true. Finally, by casting a cloud over the fairness of the referendum it also creates doubts about the finality. It seems doubtful to me that many will take this as the final word on the topic, no matter how much politicians will rush to proclaim it to be such. In many ways, the result is therefore already imitating the course of the Scottish referendum campaign in which a victory for the status quo is one solely on the basis of casting doubt on the timing and circumstances of change rather than on the merits of the change itself. Making a case that a vote to Leave while Obama remains President would see Britain fail to get as favorable treatment as voting to Leave under a Republican is to state the obvious. But it is far from an argument in favor of EU membership. And it is a continuation of an almost entirely negative Remain campaign.