The Third Stage of Grief: The Dukakis-esque Premise of the Walker Campaign 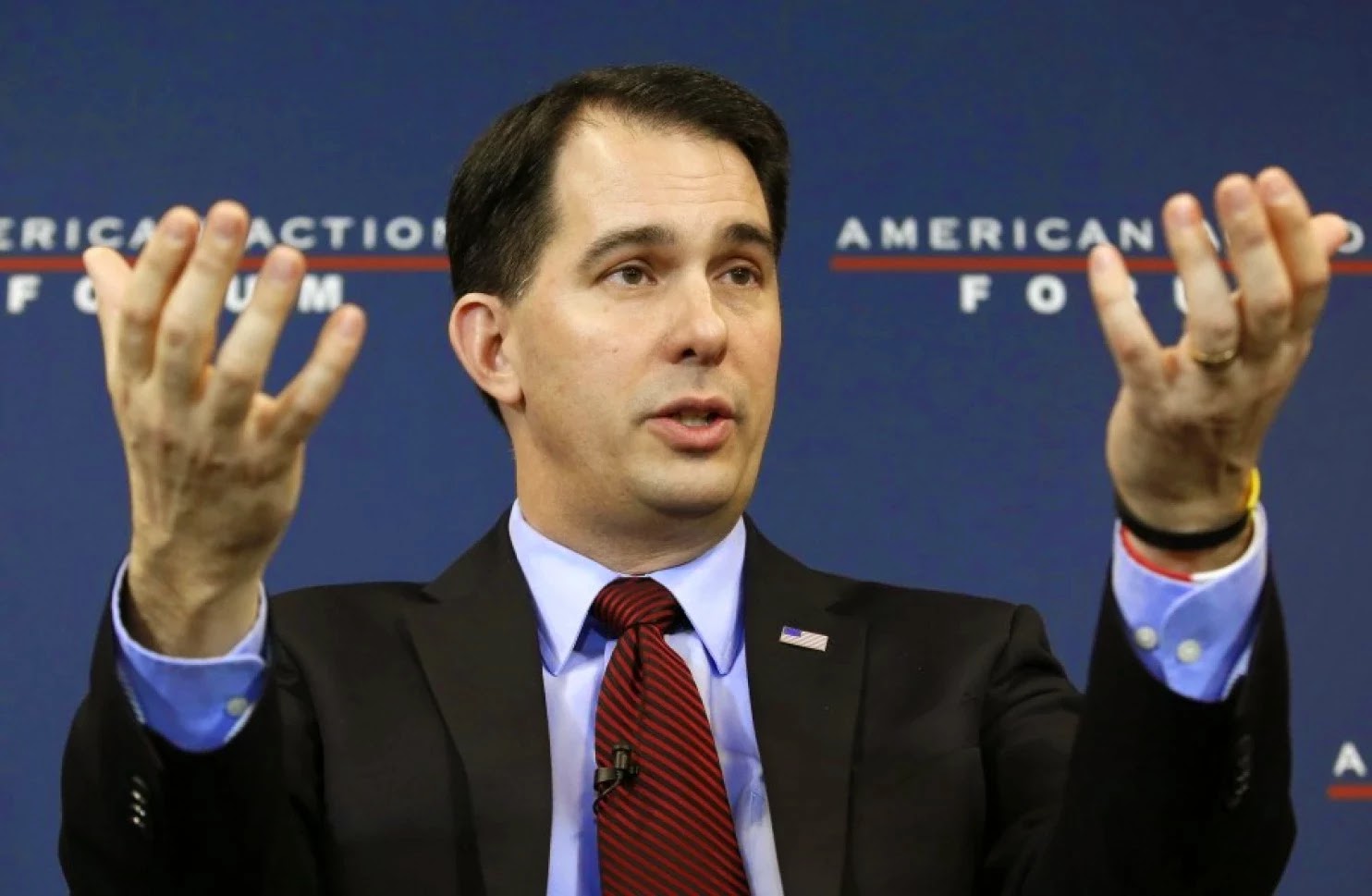 Nearly a year ago I made two observations on the 2016 Presidential elections. The first is that the obstacle facing the Republican party is not so much demographics or the strength of Hillary Clinton, but rather the process by which the party has come to embrace a set of policy positions, especially on economic issues, which are toxic. The second is that the Republican base is unlikely to accept moderation or alterations to its economic platform, as opposed to its more flexible social issues planks, until it becomes clear that simply trying the same failed strategy over and over again is unlikely to work.

In Scott Walker’s emergence as a front-runner, if not the front-runner for the Republican nomination, the latter seems more likely than it did a year ago. Not because Walker is a strong candidate with a strong shot at winning the general election; quite the contrary actually. Walker is a white male conservative Midwestern governor with no biography outside of politics who is largely known for his commitment to conservative orthodoxy on economic matters, and he has hitherto been running a campaign based around experimenting with how closely he can represent the personification of American right-wing orthodoxy on all points. In effect, he is generic Republican, and if he loses, it demonstrates that generic Republican is un-electable in its current form.'

He is also symbolic of the final stage of grief through which parties which have lost power tend to go through. Opposition parties generally tend to have a three-election recovery from realigning defeats. The results of the first election defeat are written up to bad luck; the year was poor, the party had been in officer too long, events intervened. In this sense there is nothing that could have been done to prevent the defeat, and therefore nothing that can be done to prevent another defeat in the future. We saw this rationalization among Labour supporters in 1979, Tory ones in 1997, Democrats in 1980, and Republicans since 2008. The second defeat is a different matter and is usually written up to the candidates, either the unusual strength of the incumbent or the flawed nature of their opponent. In the case of the Republican party, this has become the conventional wisdom on the 2012 result. Obama faced a bad candidate in Mitt Romney, and is perceived as having had unique appeal to non-white voters which Hillary Clinton will presumably not share, and therefore the only thing Republicans have to do is to not nominate Mitt Romney. That the same argument regarding non-white turnout was made before 2012, namely that it could not possibly match, much less exceed 2008, is ignored so that it can be convenient recycled for 2016.

Such arguments are made because they often serve the interests of everyone. Ascribing the 2008 defeat to forces beyond the party's control served to allow McCain and those around him to avoid having to defend their campaign decisions, diminished the danger Obama posed to a potential Republican candidate in 2016, and also permitted conservatives to avoid blame being cast on Sarah Palin's presence on the ticket. Condemning Mitt Romney allows Republicans to avoid any discussion of whether the electorate endorsed Obama and his agenda, or whether Romney was too moderate or conservative. Rather he was just too gaffe prone.

More importantly, it allows for the avoidance of any serious ideological discussion. Two major trends have arisen within the American conservative movement in recent years. The first has been the increasing association with moral principle rather than ends-based efficiency, which has seen an almost religious devotion to supply-side economics. Taxes are too high not because of even the ideologically-informed Laffer Curve, but rather because they are inherently confiscatory and morally wrong. Government redistribution is inherently immoral, while labor unions are forces of evil not because they are sometimes corrupt or prone to causing inefficiency but because they inhibit the holy market, and limit the freedom of the owners who "built" their companies. Witness the absurdity of the Tennessee legislature threatening to strip Volkswagen of tax incentives if it allowed its workers to unionize, or Scott Walker's recent public claims that Reagan's handling of the Air Traffic Controllers strike in 1981 paved the way for the fall of Communism. That Walker, who represents the ideological center of the conservative movement would express its thoughts on the issue is far from surprising; that his advisers would let him forget the role the labor union Solidarity was playing in Poland at that very moment turns his remarks very nearly into self-parody.

It is self-parody, however, which is only visible to those outside of the movement. Within, the focus is on unity rather than expansion, and here lies the second development. As the conservative base has replaced issue analysis with near-religious devolution to moral principles in policy, the natural consequence has been a series of inquisitions which have cost the party Senate seats in Indiana, Nevada, and Missouri, and forced Romney to play whack-a-mole with Rick Santorum and Herman Cain. For those who do not wish to engage with the idea that the views themselves might be repugnant to a majority of voters, this disunion has become the bane of the party. Hence Scott Walker's greatest asset has become his perceived ability to appeal to all "legs' of  the conservative stool.

The focus on that internal appeal has resulted in one of the most bizarre premises ever to define a serious Presidential campaign. While his appeal for the National Review is obvious, a Scott Walker candidacy is an interesting experiment in seeing what will happen if a party runs a candidate with no personal or political appeal whatsoever outside of ideology. Walker is a white male Midwesterner, with no obvious appeal to Hispanics, African Americans, or Asians, whose intention seems to be run a campaign solely on the economic policies which did so much damage to Mitt Romney in 2012. He has in fact not just embraced Romney's views but exceeded them. Romney's campaign was presumed on the fluke-sh nature of Obama's win, and the belief  that by presenting a CEO-esque  aura of  competence  he could  walk  into the Oval Office. It was an absurdly over-optimistic strategy, but it was one that at  least took account of the  playing field and candidate.

Walker's, by contrast, is based  on swinging enough blue collar voters in the Midwest to win states that have not gone for a Republican since 1988, yet  he  has  defined himself almost  entirely on his opposition  to labor unions and public sector workers, without even the mitigation of an economically nationalist skepticism of free trade. Romney's attacks on China may have been intellectually lazy, a strong China is vital to a strong American economy as the current slowdown is showing, but at least it was aimed in the right direction. Walker by contrast is basing his campaign solely on his appeal to one constituency, while adopting zero positions of appeal to that constituency, and basing his public persona in fact on attacking them. Beyond the Midwest and Washington, he has little obvious appeal to anyone else. Unlike McCain he lacks a military record, or a profile of independence. Unlike Mitt Romney, he lacks the corporate background that would allow him to sell competence in place of ideology even if he were inclined to try. He is an awkward speaker, who carries an almost populist commitment to conservative orthodoxy that is likely to do wonders for winning over high income Asian Americans. In effect, he is the personification the white backlash politics that swept the upper Midwest in 2010, and 2014, and the rationale behind his candidacy seems to be that he come somehow reproduce that backlash in a Presidential election.

That he is also a personification of the conservative movement is therefore further evidence that the conservative movement in its present form has almost entirely become an extension of that white backlash, which more than anything else is the real problem facing the GOP. Until the Republican party decouples free market economic parties from almost Stalinist positions on taxes, regulation, and income that have far more to do with racial resentment than any understanding of Macroeconomics, the party is not going to look like a viable government in those regions. And until it decouples its skepticism of government solutions to problems such as climate change, vaccinations, and internet regulation from populist attacks on those who believe those problems even exist, the appeal of the party among the better-educated upper middle class,both white and non-white will remain vastly lower-than it should be.  There is no harm in a party supporting smaller government and lower spending, but when government spending is expressed in terms of theft(by you know who), low wages in terms of laziness, and taxes in the form of an attack on large portions of the electorate as “moochers” it is not hard to why the appeal is limited. And while there is a legitimate case to be made that surrendering economic health unilaterally is too great a price to pay to respond to the unclear consequences of climate change, accusing anyone who believes in climate change of being a Marxist traitor is alienating and makes the party appear not just ignorant, but proud of it.

The irony is that it is unclear if Walker believes in these positions, and he has put together a solid and impressive campaign team. But ultimately he has running as the most core of core conservatives, and while he is not the Republican George McGovern, he does very much appear to be the Republican Michael Dukakis, who after all won the primaries and appeared poised to ride a time for change theme into the White House until his views, which he was intellectually honest enough to admit and explain, repelled the electorate.

This has left Jeb Bush in a difficult place. Jeb Bush is running the campaign Mitt Romney perhaps should have run in 2012, aiming for the general, disassociating himself from the more circus-esque elements of the party and process, and attempting to come across as a plausible President. Ultimately however, he is the wrong candidate running the right campaign in the wrong year. His name is liability, especially against a Clinton for whom it neutralizes key vulnerabilities, and that inability to establish himself as far and away the strongest Republican in a general election will undermine his primary position.

Yet if Bush has vulnerabilities in a general election, he at least comes across as someone who could plausibly be President and would inoffensive enough to win over voters unhappy with the Obama Administration.

Ultimately the Republican party needs to lose an election fought on issues in order to gain the internal cohesion necessary to change them and adopt more flexible attitudes, and that can only when a candidate goes down in flames not as an ideological crusader or moderate, but as generic as possible. Michael Dukakis made Clinton possible, Scott Walker, while almost certainly not likely to be President himself, may well open the door to Brian Sandoval.