The Politics of TPP and Mexico City 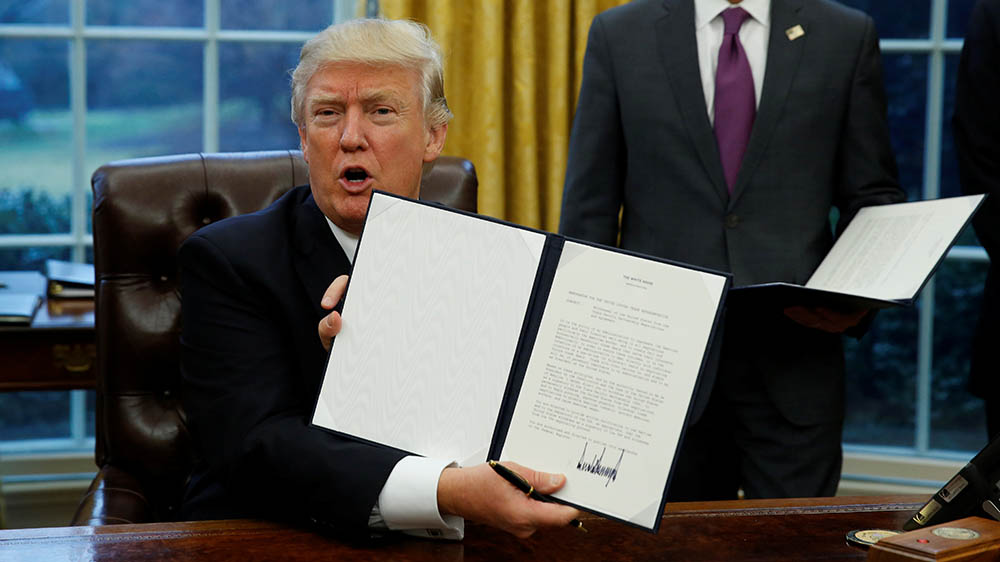 With Donald Trump, one never knows whether it is genius or luck. Nonetheless, he has spent the last 18 months outmaneuvering vastly more experienced candidates and political operatives, confounding the media, and controlling the public narrative. Hence by now it should be obvious to his critics that when he offers what appears to be a tempting target they should perhaps pause, reflect, and consider the wider context before charging in. Their failure to do so was on display in response to Trump's twin policy announcements on his first full day as President, Monday, January 23rd when he signed executive orders pulling the United States out of the TPP and reinstating the Mexico City Policy under which American aid cannot go to NGOs which promote abortion. One can argue with the merits of either move, or even the individual politics, but the combination was brilliant. Having been elected largely because far too many working class or self-identifying working-class Americans felt ignored by a Democratic party obsessed with social issues, especially ones that seemed to affect small minorities, he delivered the greatest single victory to unions in 30 years while ensuring that all his critics could talk about was tax-payer funded abortions for foreigners.

Now the above description is a caricature, but politics works in caricature, especially these days. And if Trump may lack extensive experience of policy development, one thing that he understands, perhaps from reality TV is public opinion and reactions. And whatever the actual importance of the Mexico city policy, Trump or his team understood that in the wake of the "Women's Marches" this weekend it would be impossible for Democrats and his critics on the left to avoid being drawn into a fight over any attack on abortion or women's issues, no matter how expected or marginal. That the move simply reinstated a policy that was in place under George W. Bush until 2009 only strengthened his position, by making his critics look more obsessed with symbolism which they were. Because the reality is that the Democratic party of 2016 is more concerned with if not "social" issues then "identity" ones and will always react with instinctive fury to any infringement.

Partially this is because liberalism increasingly brooks no dissent on social matters. Economic issues are another matter. Democrats are not exactly sure what their position on trade is. Obama championed the TPP, while Clinton campaigned against it, and the result is that Democrats are unsure how to attack Trump for abandoning it because they are unsure whether they would have done the same thing. Faced with such a quandary it is easier to focus on another issue.

This was a mistake because while junking TPP might have been questionable economics it was smart politics.. The decision to withdraw from the TPP, if not signalling an intention to fulfil all campaign pledges, such as to impose a 45% tariff on Chinese goods, showed a willingness both to move quickly and to buck the vested economic interests represented in the President’s cabinet. The Trans-Pacific Partnership enjoys, or enjoyed, the almost unanimous support not just of the US Foreign Policy elite, but of Wall Street as well. Dropping therefore indicates that at least on major symbolic issues, Trump will come down on the side of his supporters, and thereby offered rebuttal to the narrative Democrats have been trying to build regarding his cabinet, namely that it is dominated by billionaires and concerned with the interests of the elite. By screwing Wall Street over so publicly and decisively he undercut that narrative entirely.

On a wider level, he drew a contrast with his predecessor. Trump subsequently spoke with the head of the AFL-CIO who praised his decision a move that emphasized to union and post-union voters who defected to him November that whereas Obama lectured and Clinton sold them out, Trump was actually delivering. It also drew the contrast that while Trump was talking to them and putting them first, his critics were talking about taxpayer funded abortions for foreigners. No better image could be thought up to keep rural and industrial voters on-side or at least to convince them that they did not make the cut of important constituencies to the Democratic party. In a sense, that killing TPP might be economically damaging only strengthens the politic of the move because it shows unlike Democrats who get elected on protectionism but then are persuaded by academic economists to change positions, Trump was willing to deliver on his promises regardless of what the "experts" might say.

In a sense, Trump had to block TPP. His opposition to the TPP had been so visible, and his relations with the media so toxic, that any effort to reverse course and sign, as most observers believed Hillary Clinton would have done(who also flipped to opposing the deal during the election campaign), likely would have provided a stick with which to beat the Administration. But if explicitly reversing course was impossible, it was perfectly viable to postpone the issue, announcing that the US would withhold its agreement pending unspecified alterations. That likely would have been the approach Barack Obama would have adopted, and would have freed Trump to decide on the matter at a more opportune moment. As such, Trump also tried to demonstrate that whereas his predecessor was a man of words, he was a man of action who actually did things.

Much of this may have been showmanship, but showmanship matters in politics. It matters all the more when the major Democratic strategy going forward seems to be to harp on Trump's unpopularity and wait patiently for him to commit electoral suicide, the exact same approach adopted by his primary rivals and the Clinton campaign in the general election. Both managed to convince themselves at various points that it was happening, much as many are now convincing themselves that controversies over inauguration crowds and poor coverage in the New York Times and MSNBC is somehow turning into a fiasco for the Administration. They would be wise to take a step back and think about how this looks to those who don't follow politics as a horse-race, but rather tune in only for the highlights or major events. If they did, they would notice the same thing they should have about the first Presidential debate. Clinton won overwhelmingly on points, but Trump won the most important part on trade. The same is happening today.