The Great Laziness: "The Great" Abandons Historical Accuracy for a Less Compelling and Backwards Fiction 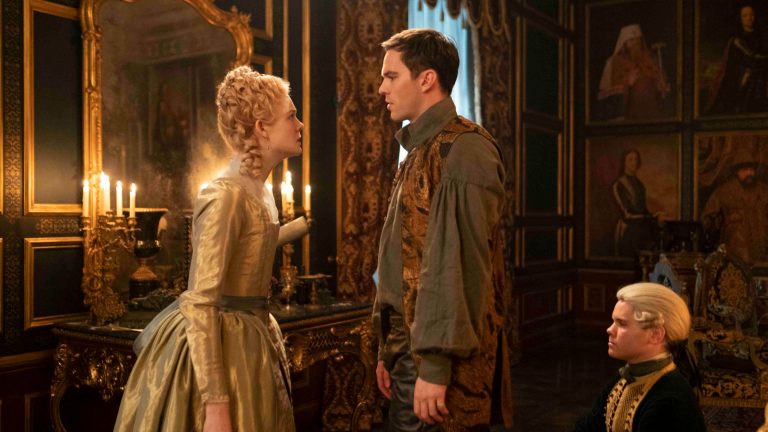 "Occasionally based on real events" declares the text that appears before each episode of Hulu "The Great", a mini-series "loosely" based on the story of Catherine the Great from the producer of the film the "Favorite". That film was hardly a model of period drama, but it generally reflected actual characters and the course of events. Its embellishments were exaggerations if not of the facts, then of rumors and stories widely believed at the time. The result was a critical success, and evidently a commercial one as well given that it earned creator Tony McNamara the chance to produce "The Great".

On paper "The Great" follows a similar model. It uses a historical setting to mock period dramas. The costumes, the pretentious dialogue, the overly dramatic emotional conversations, the quick cutting between scenes and events. In this it could have chosen any period. It definitely does little to make use of the one it chose. In theory based on the story of Catherine the Great, it follows a young German princess after she is invited to Russia to marry the Emperor Peter, a manchild with an obsession with his Great father, only to be frustrated by the position of women at the Russian court and begins to plot to overthrow her husband and bring enlightenment ideas to Russia.

Short-cuts are taken. Peter was not the son of Peter the Great but his grandson, never having met his forebear. He had grown up in Germany like Catherine(Sophie of Anhalt-Zerbst). He in fact only was Czar for a few months. Accuracy can be sacrificed for drama, and it is understandable why untangling the familial structure of the early 18th century Romanovs would be unappealing to the creators. Those complexities confused European diplomats as well. The stranger aspect is the thematic departure. The show clearly wishes to present a feminist perspective, but it undermines its own theme with its deviations from historical accuracy. Far from being a misogynistic court of boorish men, Russia in the 18th century was the most female dominated political system the world had ever seen and arguably has seen. Between the death of Peter the Great in 1725 and the death of Catherine in 1796, men ruled for a mere 3 out of 71 years. Arguably it was Catherine's husband who was at a disadvantage in 1762 as a male ruler attempting to assume power 37 years or almost a lifetime after the previous adult male. Even Peter had been forced to take power in a coup against the regency of his aunt Sophia.

Catherine's problems with her husband were a secondary concern for most of her time in Russia. The much more important relationship was with a character "The Great" reduces to a dunce, the Empress Elizabeth. Far from the sister of Peter the Great, Elizabeth was his daughter, and the only surviving child of his second wife Catherine, who as Catherine I was Russia's first Empress from 1725-27. Having seized power in a coup against the six-month old Ivan VI in 1741, Elizabeth imitated her English namesake by taking lowborn lovers(she reportedly married a Cossack peasant, even visiting his home village) and personally taking part in drinking and hunting. It won her the undying loyalty of her guards who placed her in power, and would eventually install Catherine the Great there. Choosing to eschew a highborn husband, Elizabeth adopted her nephew the young Duke of Holstein, who was also a potential heir to the Swedish throne christening him Peter. Unlike Catherine, Peter would never adapt himself to Russia. He remained in awe of the Prussian King Fredrick the Great, a sworn enemy of the Empress Elizabeth. Sophie, the future Catherine was a childhood friend of Peter's and her father was an officer under the Prussian King. She should have been the perfect match and initially was, so much so that the so-called "Young Court" around Catherine and the Grand Duke Peter became a center of opposition to the Empress. Catherine's mother was even banished from Russia as a Prussian spy.

Catherine, however, eventually broke from her Pro-Prussian orientation. Elizabeth, desperate for an heir, and finding Peter unsatisfactory placed her hopes in Catherine's new son Paul. This provided her and Catherine with a common interest when Peter took a mistress and began moving towards repudiating Catherine as that would not only threaten Catherine's succession but also the position of Elizabeth's favored successor Paul, who she was raising as her own. The situation was further complicated by Russia's war with Prussia, a war which Peter at best opposed, and at worst supported Prussia against the country to which he was heir. Running from 1756, by 1761 Prussia was all but defeated with Russian troops in Berlin. Then Elizabeth suddenly died. Peter moved rapidly to repudiate not just her memory, mocking her body at her funeral, a poor move given she was in fact the daughter of Peter the Great in the eyes of the army, but immediately made peace with Prussia returning all of Russia's conquests over the preceding six years. This "treason" infuriated the army. At the same time he moved against Catherine. His peace with Prussia created a constituency for a revolution, while his treatment of Elizabeth opened the door for Catherine to present herself as merely continuing Elizabeth's memory in terms of defending the position of her son Paul against the intriguers around the new Czar. The "coup" was a coup by the cliques which had ruled Russia for the previous twenty years against a circle which had tried to rule for twenty weeks. In a system where no Czar had succeeded without some sort of "coup" since 1643, this was normalized behavior.

There is plenty of room for a fascinating story of the dynamics of a female dominated court and how Peter was in fact undone by attempting to adopt typical Enlightenment gender and social norms into such a system. It would invert the normal gender dynamic and much of the humor present within the series we received, as well as the style of dialogue could easily have been adapted. Instead, we get something that has been done dozens of times before. Plucky feminist girl goes to backwards barbarian kingdom and teaches the natives enlightenment values, overthrows the bad king, and brings civilization. The core objection is not that it is untrue. It is that it is boring.

It is also arguably insulting to transform perhaps one of the greatest female figures of Russian history, the Empress Elizabeth, into the absentminded and erratic "Aunt Elizabeth", and exactly the sort of thing that alt-right types accuse left-wingers in entertainment of doing to male figures. Except here a powerful and influential female figure is actually made feeble-minded, superficial, and dare I say, "weak." Catherine herself is also transformed from an astute political actor, able to manipulate both international and domestic politics, maintain her own links with foreign courts and the Orthodox Church, and transformed into something of a ditz ignorant to the dark nature of the world and obsessed with reading of random books. In reality she oversaw an intelligence network which transferred hundreds of dispatches a day.

As for the show it is not "bad" per se. But my continuous reaction while watching continues to be "why?". Why make these changes when they undermine the message of the film? Why make them when they make it less interesting? The creators admitted to not reading the history until after coming up with ideas, but that still implies they read it and potentially could have adopted some. Why did they produce this? It is a 6/10 show, which does not make it stand out in anyway. What make it unique is that the creators seem to have taken pains to turn a 8/10 show into a 6/10 for no apparent reason. And that was the question I was left with.