The Eurogroup and SYRIZA's Cowardly Referendum 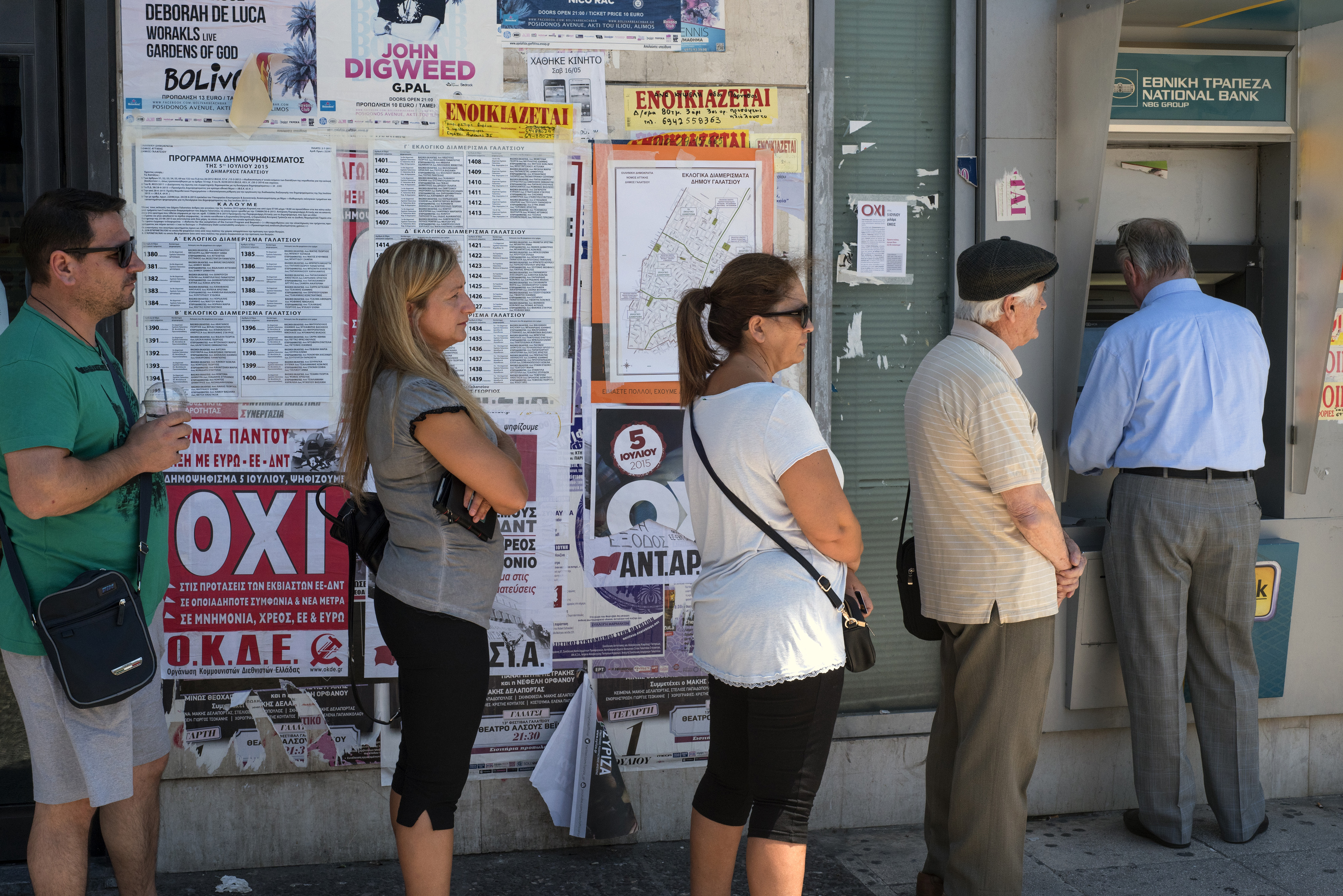 When looking back at the handling of Greece since 2008, it is highly unlikely anyone will emerge covered in glory. Greek governments of the traditional parties of the left and right beggared Greece for political advantage them attempted to exhaust their creditors through sheer obstinacy into forgetting about needed reforms. The Germans proved myopic about the dangers of setting precedents, while two French IMF presidents in a row allowed their ambitions to sit in the Elysee drive their policy choices. In turn, many of the IMF's problems can be laid at the door of the United States congress, which refused to contemplate any further financial support for a potential IMF bailout.

Yet none of their contributions will approach the mammoth act of cowardice that Alexei Tsipras and his SYRIZA government performed on Friday night. After months of negotiations, Tsipras suddenly broke off the talks and announced plans to hold a referendum on July 5th. This came not only as a shock to the European finance ministers, who say they would have been happy for Greece to have had a referendum earlier this month, but also to the Greek representatives who learned about the announcement from twitter.

Forget all the talk about "democracy" and "will of the people", There are two types of referendums. The first ask the voters to make a choice by either choosing between two policies, or in favor or against one. In these votes, both options are viable and have clearly laid out consequences. That is not the case of the Greek referendum, which falls into the second category of referendums that are designed not to weigh in on a decision, but rather to ratify a decision that has already been made. These sorts of referendums may nominally have two options, but behind door number one lies a clear policy, behind door number two lies anarchy, since those holding the referendum have not even bothered to define it.

Much attention has been paid to the farcical nature of the "Yes" option in the proposed referendum, asking Greek voters to weigh in on a deal that is no longer on the table, and under circumstances that have changed dramatically since it was presented by a collapse of the Greek banking system and likely IMF default on the 30th. Yet for all these drawbacks, the "Yes" option at least presents a clear mandate for something. If it passes, it is all but certain that Greece and the Eurogroup will patch up something.

Things are not so clear in the event of a "NO" victory. No effort has been made to define what a "NO" victory would mean. Is it a clear decision to leave the Euro? To Default? What would a default mean? There are no answers to these questions. In some sense it is understandable why a NO vote would send everyone into uncharted territory, but that does not mean that the government is freed from the burden of having any sort of plan. Yet despite the fact that the Eurozone finance ministers, and various European governments have been making plans for days in terms of how to handle a Greek default, if Athens has been doing so, they have not been telling anyone about it. SYRIZA has presented no plan for a transition to the Drachma, no effort has been made to build up reserves of either hard currency, or fuel, food, and other vital imports. Nor has there been any hint of a timeline, or how SYRIZA would intend to back a new currency, or how Greece could avoid enforced austerity when they would still need international help to launch one.

This silence might be understandable if the Greek government intended the "NO" option to be a mirage, but the Greek government has officially recommended a "NO" vote. So then how do we reconcile a government that has urged the public to vote NO, yet made no preparations for what would then happen, or attempted to explain what such a vote would mean?

The answer is a government that intends to "lose" the referendum. Here lies the great irony of this whole exercise. If Greece had wanted to hold a referendum on the bailout terms, almost without a doubt the suggestion would have been welcomed as late as two weeks ago. But Tsipras waited till the last minute, and then scheduled the referendum for five days after Greece's bailout program will end. Certainly the terms on offer did not come as a surprise. If anything, they were more generous than anything that had been previously offered. Hence the intention was that the referendum would take in exactly the environment that is being created this week, one in which the banks and stock market are closed to some indefinite future point.

The only plausible outcome for a referendum conducted in such an environment of panic where no plan for a "NO" vote is presented would be for the Greek electorate, faced with a taste of what awaits them in the event of a default, is to vote "Yes". So why would SYRIZA want to lose such a referendum.

The answer lies in the political calculus. Either a default, or the implementation of an agreement would be unpopular and painful. By calling and then losing the referendum, not only has SYRIZA fought the good fight, but it has not failed; rather its favored "policy" was never tried and the Greek people failed it. In the event of a "Yes" win it would be implausible for SYRIZA to remain in office. Not only could it no longer claim to "represent" the Greek people when the electorate has "rejected" its advice, but clearly it would not be capable of reaching an arrangement with its creditors when relations have turned to such a toxic level following the events of the past weekend. Hence the only possible course of action would be for Tsipras to resign, and allow Samaras and New Democracy to take office in order to reach a deal with the Eurogroup. Given the unpopularity of SYRIZA, and the panic in the markets, it is hard to see how Samaras would not succeed. While Friday's deal may be "off the table" for the current government, it is likely not off the table for any Greek government. Samaras would then be saddled with the responsibility for the agreement, while SYRIZA would be freed from a divisive internal struggle.

However strategically sensible, this represents a monumental act of cowardice on the part of SYRIZA. It makes it clear that Tsipras did not run for office to make difficult decisions, but rather to see if he could have his cake and eat it too. When it became clear he could not, he decided that his primary interest was to have someone else make the decisions.If they really wanted to stop a bailout, they could either reject it outright, or make an effort to explain what a "No" win would mean.  SYRIZA cares less about the decision, provided they are not the ones to make it. In effect, SYRIZA has made clear it does not have a fixed opinion on the single most important issue facing Greece

In fairness to SYRIZA, the alternative is almost certainly unpleasant. Association with an unpopular austerity agenda would destroy SYRIZA's support even if it were possible, and that is in doubt. Acceptance would likely produce a split sufficient to deny the government its majority. SYRIZA's partners, the right-nationalist Independent Greeks would almost certainly leave the government, since doing so would allow them to promote their populist credentials at no cost, wheres remaining would see them compromised. SYRIZA's left would not only have ideological reason for departing, but strategic ones as well. In fact this is the current quandary which haunts Greek politics, something the Eurogroup has missed. Everyone has an incentive to oppose the conditions of the bailout program, but no one has the freedom to reject them. Hence it has been as certain that Greek governments will obstruct or ignore their conditions as it has been that they would in the end accept them.

The Eurogroup seems to be belatedly realizing this, though rather than drawing the obvious conclusion, that a managed default is the only viable outcome in the long-run politically, they have instead seized on the farcical referendum as a magic wand of their own. Today they are engaged in talks to achieve a last minute deal which would extend Greece's bailout in favor of the Greek government adopting a "Yes" position in this weekend's referendum, This is an indication that certain officials in the EU, most prominently Juncker have no greater interest in a real referendum or a legitimate popular endorsement than SYRIZA, since they seem to somehow think that a manipulated referendum would be meaningful in anyway other than providing political cover for SYRIZA to head out the door. And it shows their lack of understanding of what is going on. SYRIZA is not opposed to a "YES" vote, but does not want to implement it, and endorsing it would remove their cover for leaving office, placing them in exactly the position they do not want; an internal split along with the odium of implementing an unpopular policy. And for that reason, the new proposals are the worst possible rather than least bad option for all parties politically.