Putin's Verdun: While the Crimea Burns, Russia Prepares a Trap for the West in Estonia 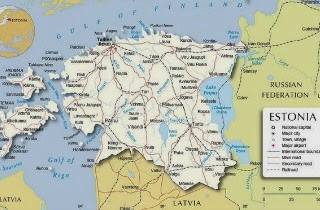 Today most of the focus of the international community has been focused on the military actions in the Crimea. Having formally annexed the region yesterday, Russian forces have begun an assault on the remaining Ukrainian forces in the peninsula. After initially vowing resistance, Kiev appears to have thrown in the towel and ordered a withdrawal. This is isn't surprising. Post-referendum, this is largely a mopping up operation.

It is, however, a mopping up operation that is serving the purpose of covering a more ominous development. At the end of my extended piece yesterday comparing current developments to those after Munich, I mentioned that if I were Barack Obama, I would be quite concerned about Latvia. Based on today's ultimatum to Estonia, it appears I was off by one Baltic State.

Putin has both strategic and geopolitical goals right now. The former were completed by securing Russia's access to the basing facilities at Sevastopol permanently. The latter, namely weakening the Western alliance, are still incomplete. Putin's actions in the Crimea went a long way to embarrassing the United States and the EU and demonstrating that they do not run the world as they might have thought, but Ukraine was neither a member of the EU or NATO and therefore outside the defense envelope.

Advisers close to the Kremlin have admitted that one of the long-term goals of the Putin Administration is to bring about the break-up of the Atlantic Alliance and the "Finlandization" of Europe. If this sounds like a fantasy, that's because when written it is. But most aggression in foreign policy is the result of opportunism rather than deliberate planning, and success tends to breed momentum of its own. This was true of Hitler in the 1930s, and it is true of the Kremlin now.

At this point it is abundantly clear that not only are the US and Germany incapable or unwilling to consider a military response to limited Russian provocations, but that any serious economic response, including energy sanctions is unlikely as Berlin and London are putting domestic considerations above European ones. It is equally apparent that if not entirely successful, Russian messaging regarding the status of Russian-speakers within the Crimea and the nature of the new government in Kiev has been at least partially successful, and that messaging is likely to gain in effectiveness as a nationalist reaction to the loss of Crimea sweeps the rest of Ukraine, strengthening the Far Right. That should provide more than enough after the fact justifications for the Russia Today spin machine to swing into action. If Putin is going to move against Europe, now is the time.

That leaves the place. Putin needs three things in a target at this point. First it needs to be of less strategic value than the Crimea so that the arguments for fighting for it are even less. Second it needs to be politically vital, preferably as part of both NATO and the EU so that if the West chooses not to fight for it both organizations will be shattered. Thirdly, Russia's moral case must be so impeccable that in the game of political chess that will precede the Western defeat, Russia at all times maintains at least a moral deadlock if not a moral ascendancy. In effect, he needs an Eastern European Verdun.

Estonia meets all of these criteria. It is poor and geographically isolated. Furthermore, more than a third of its population is Russian, a legacy of Soviet rule, and that minority, unlike that in the Crimea, has legitimate cause for complaint. Soviet rule was imposed with almost unspeakable brutality in 1940, during the course of which nearly 20% of the adult population was deported to Siberia, and the settling of Russians was a deliberate effort by Moscow to destroy the Estonian nation demographically. As a consequence, when Estonia gained independence in 1991, it saw its Russian minority as a fifth column and has treated them accordingly. There is no official discrimination on the basis of ethnicity; but fluency in Estonian is required for state employment, the franchise, higher education, and many jobs in the private sector. A concerted effort has also been launched to challenge the residency of Russian-speakers and to deny them Estonian citizenship.

All of this makes Estonia's position vis-e-vis Russia far weaker than that of Ukraine except for one thing; Estonia is a member of both the EU and NATO. If Russia is able to stir up chaos in the form of riots and unrest within a member of both organizations it will discredit them totally. It makes no sense for Europe to risk destruction to defend Estonia, less than it did over the Ukraine, but the EU and NATO are based on the presumption that an attack on one is an attack on all. Putin's goal is to exploit this as a lie; Estonia is Verdun, a strategically worthless target that political factors forced the French army to defend to the death. In this case its Putin's goal to draw NATO and the EU into a battle not of armies, but of political capital, and to destroy that capital in the open fields of the Baltic shore.

Putin of course will move slowly. But the precedent has already been set. The ultimatum gave notice that the Russian Federation will be keeping a close eye on the condition of Russians within Estonia. One can guarantee that their "condition" will rapidly get worse. Expect Russian agents to spread money among unemployed Russians within Estonia in order to organize protests, and Russian special forces to engage in provocations if not outright acts of terror. The goal will be to goad the Estonia government into retaliation; if it does nothing it will effectively lose control of its border regions and internal security; if it cracks down, Moscow will be able to complain of the violence, and have an excuse for intervention. Most likely Moscow will be able to demand that the EU and the United States intervene to deal with the situation, and may even be able to cite EU law in defense of Russian claims. Then the failure of the EU to enforce the protections provided by its own laws, and of the United States to maintain order will act as an excuse for Russia to step into the breech. All will be perfectly legal, and officially at least, Russia will never step down from the moral high ground.

Is this sort of intervention inevitable? Of course not. If there has been one thing that has defined Putin's behavior this year, its the opportunism with which he has pursued objectives. Putin went into the Crimea with a wide range of acceptable outcomes; the situation as it developed, limited resistance in the Crimea, a disappointing lack of unrest in Eastern Ukraine, determined his progress. It makes absolute sense for Putin to force a battle a battle in the Baltic States. If it fails, he can always retreat with limited costs. If however he is successful, he all but break the back of the EU, and reverse two decades of NATO expansion overnight. People thought he was delusional when he stated those goals in yesterday's speech. He may not be as far off from achieving them as people think.