Parliament Fiddles, While Remainers Push Britain Towards the Cliff 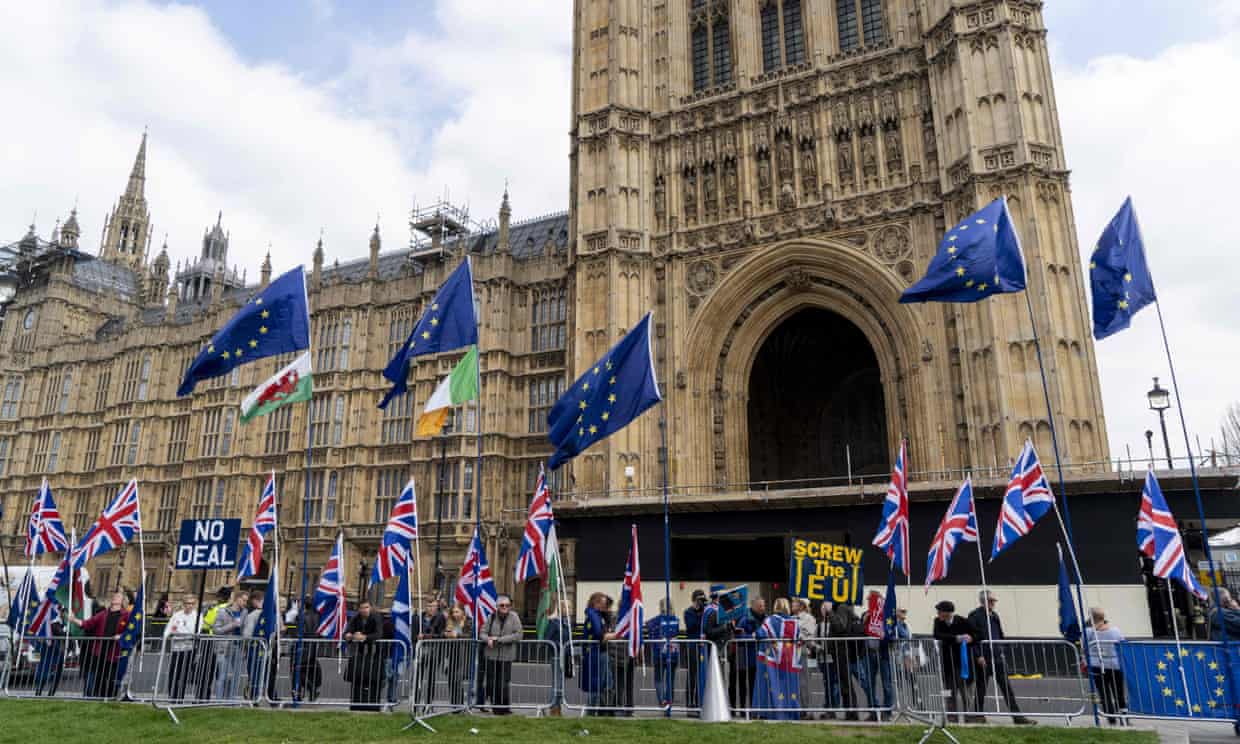 Parliament's much heralded effort to take back control Wednesday, March 27th, was a fiasco. Not merely because every indicative vote "failed". Despite the spin from Oliver Letwin that such a failure was intended, and from hard-core Remainers noting that a "Confirmatory Referendum"(on what?) received more losing votes than Theresa May's deal, it would not have mattered much if any of the ideas had won, except as a matter of PR. The real reason it was a fiasco, was that having been given a chance by the EU and circumstance to change the direction of the Brexit process by engaging seriously with the options on the table, and the timeline in which the process is playing out, MPs retreated into fantasy. There were varying degrees of fantasy. Advocates of the Malthouse Compromise were going through the motions this time around, and No Deal advocates had the defense that their plan was both plausible and acceptable to the EU, merely a bad idea. Less can be said for advocates of the other two categories of votes. Those advocating the "Norway+" option of joining the EFTA ignored, as they have repeatedly ignored, the opposition of existing members of the organization and the fact that it would still require the hated "backstop." Advocates of a customs union, ignored it would still require accepting May's WA as is, backstop and all, albeit with making its ultimate use less likely. But a customs union has to be worked out after the agreement, and cannot be imposed by Parliamentary preference, and Parliament would need a government willing to pursue it, which this one has indicated clearly it is not. The vote for a referendum was for a "confirmatory one" attached to any deal which would pass, which in turn would require a deal to pass. In the hypothetical event Labour succeeded in attaching such a referendum to May's deal it is far from clear that either Labour or the Conservatives would vote for it on final passage. Revocation, the only "real" option failed by 150 votes, which should signal that even in the most favorable circumstances likely to exist, with any new general election likely to produce a more heavily Leave Commons, it has no real chance.

Yet the options themselves were not the real problem. It was the engagement with them. Almost all of them would require an extension beyond April 12th, the current deadline set by the EU by which Britain must either crash out in the absence of the ratification of the WA, or schedule EU elections in order to request a long extension. And while Parliament was happy to take such a long extension for granted, it showed very little indication, to the EU or anyone else, that it was willing to pay the price for one. This is a key issue. Even if the Commons manages to somehow manage a plurality for some form of Customs Union on Monday, in order to get an extension it still needs to legislate for EU elections. The presumption appears to be that Theresa May will be shamed into requesting one, and legislating for EU elections herself, if Parliament merely votes indicatively for something that requires it. This wishful thinking involves ignoring May's own explicit statements that she will not preside over an extension beyond June 30th. Furthermore, it ignores the very real risk that May could not legislate for such an extension even if she wished to do so.

While media attention was focused on the indicative votes, far less note was taken of the much more important binding vote that followed. MPs voted at the end of the night to approve the Statutory Instrument which would the government to delay the Brexit date from March 29th to April 12th. Without it, legal chaos would occur this Friday. On that vote, which was sponsored by the government and subject to a three line whip by the Conservative party, only 150 out of 313 Conservative MPs voted to avoid crashing out of the EU 48 hours later. By contrast, 93 voted to do so, including members of the whip's office. That is correct, on a three line whip, barely 40% of the Conservative party voted for a two week extension.

If anyone thinks that after a two week extension proved that difficult, that a year long extension, including legislating for EU elections could be passed by this government, they are delusional. Yes, in theory the government could rely on opposition votes, but that is risky given Corbyn's inclination for gamesmanship and beyond that it would be suicidal. Not only would it fatally split the party for a Conservative government to levy a motion opposed by 70% of its own MPs, but it would almost certainly result in enough backbenches revolting to bring down the government. Not to mention a clash with its own voters, 75% of whom oppose any long term extension, and 67% of whom prefer crashing out. The entire premise of those who believe "Parliament has taken back control!" is that the Conservative Party will commit suicide to facilitate an outcome contrary to its manifesto. As Theresa May demonstrated, she may be willing to sacrifice herself for the party, but not for a Soft Brexit even she does not support.

That leaves a simple truth. Any long extension will have to be forced on the government by Parliament. As such, there was one task and one vote that would have mattered on March 27th. That would have been a simple motion which would have changed the legal default on April 12th from in which the UK crashes out to one in which, if no deal is agreed by say April 7th, the UK will request a long extension. Call this the Revoke A50 amendment minus. But in order for such a motion to not be the same sort of meaningless political free-riding all other efforts to "rule out" No Deal have hitherto been, it would have needed to be paired with a vote authorizing European elections. By failing to do so, it would create a situation in which May could request a long-extension, receive the conditions(EU elections) and rule them unacceptable, as they would be to the government and party. Parliament could whine that they were being bypassed, but they would have created the situation themselves and the EU would know it.

By not showing seriousness about the need for a long-term extension and EU elections, the Commons advocates of a Soft Brexit have discredited themselves and the process, and devalued any outcome they produce, by having publicly refused to "politically pay for it." They have also likely made three critical errors

1. Misreading sentiment in the Conservative party and among Leavers which is increasingly crystallizing around No Deal not as an acceptable Brexit, but rather as Brexit. The Party is revolting over a two week extension. A longer one could only be sold if it were required, ie. not as a policy but as process, say for a general election.

2. Misread the significance of recent events within the Conservative party. The embrace of Theresa May's deal and her departure are not so much about passing it as they are about uniting the party for an election. Previously it would have been impossible to run with a single manifesto. Her deal was unpopular and MPs would have fragmented. Now the party has a proposal which is all things to all people. Vote the WA, then decide what it means in a Tory leadership election which requires a GE victory. With May going, every plausible rival also has a vested interest in an election.

3. Misread any residual desire for Remain in the EU. The EU would love if the UK had never voted to leave and decided to stay, but are not willing to extend this indefinitely. Furthermore, they would prefer a chastened UK that having left and reflected on the consequences, decided to rejoin over a resentful one which remained through parliamentary and legal tricks by an elite minority. In effect, the EU has no interest in a technical Remain win if it does not represent a political consensus. Guy Verhofstadt himself made this clear when he described the marches and Parliamentary moves as a "Seed for Britiain's return to the European Union."

Remain supporters, along with Labour supporters of all stripes have long complained that the Brexit debate has been reduced to an internal one within the Conservative party. But by refusing to constructively engage with any of the options on the table themselves, even procedural ones required to add teeth to preventing a No Deal outcome, they have outsourced all of the political work and burden to the Conservative government. It is May's duty to "rule out" No Deal Brexit. Hacing abdicated any political responsibility for the process, it is hardly a surprise that they have found that the process itself has also been outsourced. And Parliament, for all the declarations about "taking back control" made no effort to do so. Everything was still free-riding. A confirmatory vote on May's deal. Custom Unions on May's willingness to a seek a delay and legislate for EU elections.

Several weeks ago I suggested the most likely outcome was a long-extension. I still feel that is the most sensible outcome, assuming everyone behaves in a rational way. But with Remain supporters believing they scent a chance to stop Brexit entirely, there is a real chance that the UK will crash out, at least temporarily. I say temporarily, as it is unlikely that any NO Deal situation would last for long. The occurrence would not foreclose the chance to sign a slightly modified WA after the fact, and this seems to be what the EU is planning for. It is also something which increasingly makes sense for the Conservative party, which would get to claim they delivered Brexit, shove the burden of ratifying the post facto WA onto Labour and Remainers in the Commons, and potentially blame them for blocking the deal earlier thereby precipitating the crisis. While that is not a course anyone would willingly desire, Remainers need to realize that it is probably preferable to Conservatives who care about the future of the party to the alternatives of legislating for a long delay and EU elections, accepting a Labour backed "Soft Brexit", or losing Brexit altogether. And by misjudging the willingness of the Conservative party to contemplate No Deal, the Remain majority in Parliament made it more, not less likely March 27th.