More July 20th 1944 than Reichstag Fire: Thoughts on the seriousness of the Turkish coup 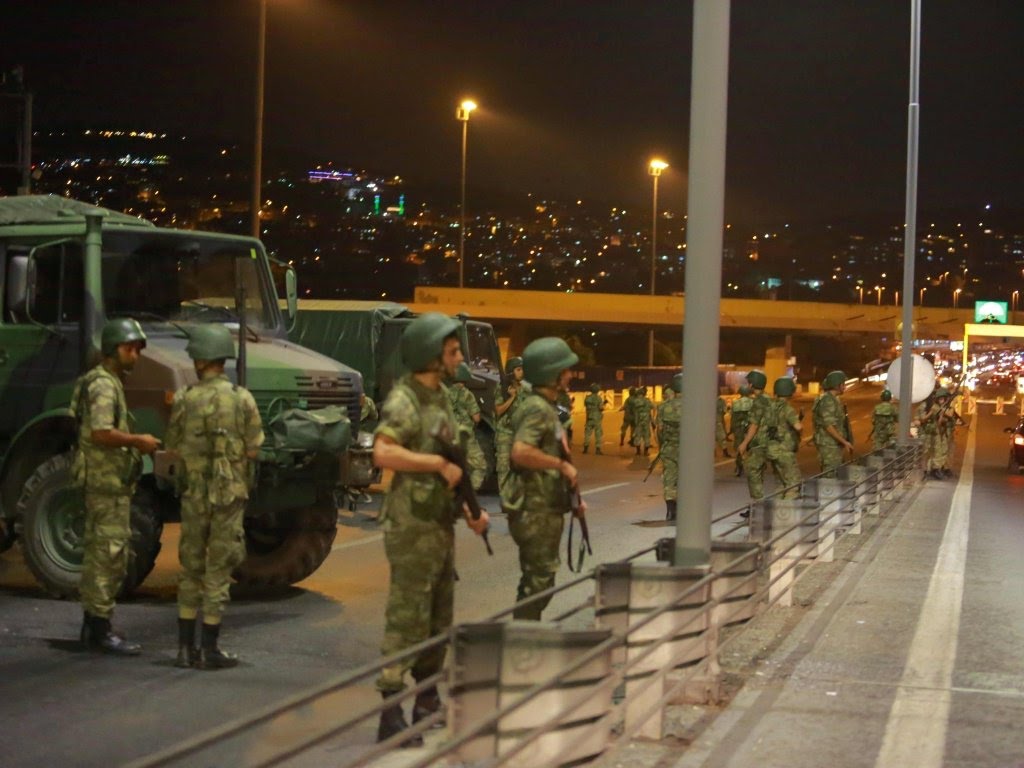 The Coup that took place on the night of Friday, July 15th, 2016 in Turkey caught most international observers by surprise. Yes, there was a proactive article several months before in the Foriegn Affairs entitled "Turkey's Next Military Coup", but it was notable for the degree to which it dissented from the conventional wisdom. Namely, that Prime Minister Recip Tayapp Erdogan had successfully defanged the military along with the rest of the Turkish "deep state." This reflected a wider demoralization of Erdogan's opponents, both domestically, and outside the country, one that has tended to drive them in the direction of either direct action(as at the Taksim protests in 2013, whose only viable objective was to trigger an extra-constitutional change of government) or resigned inaction. Even when Erdogan shows signs of weakness, or there are "legal" opportunities to remove him, his critics all too often assume that they are not real. Hence the possibility of an AKP defeat in last year's elections was all but written off, and when the AKP did in fact lose its majority in June, the opposition parties displayed a manifest lack of interest in taking advantage of the opportunity. Rather than pushing for the offer of power to which they were constitutionally entitled, they acquiesced in a second election, almost as if they viewed their own success in the first as a mistake as much as Erdogan did. They certainly seemed far more comfortable with the November results which returned them to impotent opposition.

I highlight the above weaknesses of Erdogan's opposition, because the failure of the "coup" plot, whatever its wider problems, had quite a lot to do with Erdogan's ability to get his supporters onto the streets, and the simultaneous lack of interest of his foes in doing much of anything at all other than waiting for something to turn up. Yes the prospect of military rule was not exactly attractive to the Kurdish BDP, which issued a statement condemning the coup, but even this opposition rarely manifested beyond social media statements. In the midst of one of the greatest political upheavals of the last decade in Turkey, the opposition merely voted "present" as it consistently has. No doubt in response to the crackdown which will follow the failure of the coup, one that has already begun, opposition activists will recover ,enough nerve to hold public protests and to clash with police; active political organization, especially with an early election now in the offing seems unthinkable. And in any case it is worth asking, what, after all, is the purpose of direct action such as protests against an elected government, except as a method of inducing exactly the sort of coup that just failed?

As for Erdogan, the speed of the crackdown which has h Friday's events has convinced many that either he was behind the coup, or that he had foreknowledge of it. The dismissal of  2,745 judges, both in terms of the size and specificity of that number, implies that some type of list likely existed beforehand. That a failed coup would serve Erdogan's interest of creating an executive presidency through constitutional amendment, something that despite claims to the contrary, the President had guaranteed political path to beforehand, has provided ammunition to such views.

I am skeptical, however, of suggestions that he orchestrated the attempted coup itself. The very scale of the casualties involved and the fact that the President was forced not just use Facetime to get his message out, but apparently to use it over a mobile connection from a photobooth, add to the impression that coup was not only real, but managed to appear a close run thing for at least a little while. It should be noted that this is in no way mutually exclusive with the coup being poorly executed or having little chance of success. The July 20th plot against Hitler was a desperate gamble by a small group of officers without any broad support with enlisted personnel, much less the German public. Nonetheless, for a few hours it looked as if it might succeed, at least to some people in Berlin, especially before it was clear that Hitler had survived. With hindsight we now know that given Hitler's survival it had already failed before the actual seizure of power was even attempted, but that was such a close run thing itself it is hard to argue that the coup was not a real attempt to at least remove Hitler personally.

In fact, the July 20th 1944 plot against Hitler is probably a much better comparison for the recent Turkish effort than the Reichstag Fire. As with that plot, this coup appears to have been launched by a cabal of officers including at least two senior military chiefs. Also like the July plotters, while these officers could count perhaps on the benevolent neutrality of a large portion of their compatriots if their efforts looked like succeeding, they could count on little sympathy from the rank and file who after fourteen years of AKP rule had grown up in a world where Erdogan was a fact of life. As a consequence, the actual troops to be utilized in the plot could not be allowed to realize what they were in fact engaged in lest they defect, which probably explains why many claimed they thought they were merely engaged in a military exercise. Here there is another echo of the July plotters, who told their soldiers that they responding to an attempted coup by the SS.

The lack of loyal soldiers, the limited active participation of the officer corp, and no apparent coordination with the civilian opposition all hint that the Coup was a long-shot, but two things are worth keeping in mind. First, the timing may not have been of their choice. Many coups are launched prematurely due to fear of discovery, and in such a circumstance, the alternative would not have been the survival of the plotters to fight another day, but rather yet another story of a seditious "Gulenist" cell being broken up within the armed forces. The second is that despite all the drawbacks of the plan, the coup might well have succeeded had they managed to decapitate the state. Just as the July plot might well have served a purpose if Hitler had actually been killed, if the the Turkish army succeeded in killing or capturing Erdogan, it seems possible if not likely the coup would have succeeded. Unlike the Nazis, the AKP party is a one-man operation. Independent actors have been purged, as shown by the fates of former President Abdullah Gul and former Prime Minister Ahmet Davutoglu. It may have supporters, but no formal paramilitary structure, and it is hard to see the police or activists being organized being organized by the third tier figures who would be left now that the second-tier of Davutoglu and Gul are de facto opponents. For the supporters who poured into the streets to oppose the coup it would have been unclear who they were fighting to retain as President, and the same question would have provoked infighting within the AKP and governmental institutions, perhaps paralyzing them long enough for the takeover to succeed. It would be one thing for the military to remove an elected leader, but entirely a different matter for the Army to restore order in the event of a political vacuum. Whatever the odds against a successful takeover of the government on their own behalf, the plotters therefore had a decent chance of removing the AKP government from office.

Erodgan himself almost certainly understands how close the coup came to succeeding, at least insofar as it came to his own personal. Undoubtedly Erdogan suffers from serious political paranoia, but the nature of the regime he heads is such that he is a target, in fact the only worthwhile one. The opposition has little hope of removing him through legal means, or at believes that it has little hope of doing so, and the key to any successful political change therefore is him personally. Absent his removal, it is hard to see how the AKP loses an election, or a coup can succeed. Given what he was able to accomplish through the use of Face Time over a mobile network, it is hard to believe any new Turkish government could be safe as long as Erdogan was active, even in exile, and imprisoning him would only be an invitation to rescue plots that if successful would turn into counter-coups. His death is therefore a prerequisite to the creation of any sort of non-Erdogan government, and his murder has to be the first objective of every individual and faction viable enough to be a threat.

Will this justify the purge that follows? On one level, probably not. A large number of those being removed are not actual enemies but rather potential ones. That said, Erdogan is not entirely unjustified in believing that had he died in a missile strike last night, many of the judges and officers who took no active part in the coup would have been more than happy to participate in the new government and take advantage of his death. He is perhaps violating the rules of conduct followed by a Western democratic leader in targeting not just those who tried to kill him, but by extending the purge to those who wanted him dead, but it is hardly surprising that opposition has become personal. At the point at which the goal of the effective opposition is to kill him, then his destruction of all effective opposition is an act of self-defense.

Erdogan's methods do not excuse entirely what he is going to do, nor do they provide much comfort for the West. For one thing, relations with Washington are likely to get worse. The United States' response, at least initially was weak, and even when the US got around to formally condemning the coup, the US military forces on the ground in Turkey did nothing to prevent coup participants based at the same locations from trying to kill him. Washington may see in this caution; Erdogan sees in it complicity, at least in the form of negligence in an effort to murder him. The same can be said of any refusal to extradite Gulen, which American officials seem determined to view as a political opponent. The natural result of any such cooling of NATO ties is likely to be closer relations with Moscow. Putin is always happy to extent a sympathetic ear to leaders who think that their survival is not a high enough priority for Washington, even when they have long been enemies.

Dealing with Erdogan is going to get much more complicated after the coup. But a key to doing so is to understand what happened, and why there is no longer any middle ground in Turkish politics. Failing to do so, or peddling conspiracy theories about a "False Flag" operation is in effect suggesting that one does not even believe anyone tried to kill Erdogan. If that is true, then he is sociopath not worth dealing with in any case. But if it is wrong, then in effect the message being sent is that the West is so hostile it refuses to believe he was ever in danger. And the lack of trust that implies is the basis for ending almost any relationship.