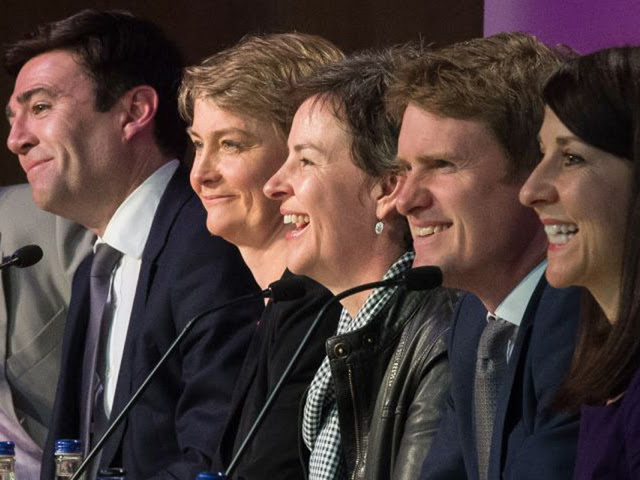 Much of the debate over Labour's choice of next leader has focused either on the ideological direction that they should take the part, or alternatively, on the limited cultural, social, and economic diversity of the contenders, the most serious of whom tend to be ex-Special Advisers to Ministers. Neither of these concerns is wrong on its own. Labour definitely lost voters in the center, and social alienation, as I have argued, have hurt the party badly on the EU and Immigration, even in cases in which its overall policy position is not extreme.

Yet Labour's problems and the challenge for the next leader go beyond that, because Labour not only lost voters on the right and in England, but also managed to lose voters in Scotland, some of whom at least were in fact alienated by its perceived centrist shift. The "anti-austerity" SNP voter is not entirely a myth. The problem for Labour is that neither is the anti-SNP English voters, and Labour's misfortune is that it faces strategic threats on both left/right, which in turn gives its opponents reasons to cooperate.

The challenge facing the next Labour leader is that actual party politics has finally caught up with electoral arithmetic. The post-1997 collapse of the Tories in Scotland created a situation in which the Conservatives were no longer a national party. This meant that no matter what they did, their odds of breaking through in Scotland were minimal. For almost a decade and a half this was treated as a disaster; for an ostensibly Unionist party with strong attachments to tradition it could hardly be seen as anything else. But ultimately it proved liberating. Because the Conservatives no longer have to appeal to Scottish voters as a whole, and to the extent they have a presence in Scotland it is among voter similar to their's in England, ie. those in the border, they are free to focus on a coherent appeal as they did with the SNP.

Labour lacks that freedom and it shows in difficult choices Labour faced. For the average Scottish leftist voter, there was no reason to vote Labour this year. Because the SNP promised to support any Labour government nationally and to oppose any Tory one, Scottish leftists had a choice between Labour party loyalists or SNP candidates who had pledged to support a Labour government, yet would try and craft a better deal for Scotland. Labour had few options in response. An effort to compete with the SNP on the left would undermine Labour's ability to win tactical unionist voters, and the no move to the left, however great, would have undermined the essential logic of the SNP's case. Nor would a move to the right have helped. Ultimately the only option open to Labour was the charge that votes for the SNP helped the Tories, which they did, but in such an indirect way, in terms of fears of SNP influence, that the case came off as desperate an ineffective.

The greater problem for Labour going forward is that the same situation exists. Any effort by Labour to build a broad, "anti-Tory" alliance with the SNP would be a disaster, not only in England, where its effects have been made evident, but in Scotland itself, whereby such a move would render Labour irrelevant. Without its incumbents, or any shot of victory, why would centrist and center-right unionists, and unionism is increasingly being determined by class and education, cast a ballot for Labour. The Conservatives actually came closer to winning a second seat in Scotland than Labour did, and if Labour were to tie itself at the heel to the SNP, they would remove any reason to support them. At the same time, if one is a leftist Scot, the existing question of why to support Labour would still apply, namely why vote for Labour when you do not trust them when you can support an SNP which will act as a pressure group for both left-wing and Scottish causes.

This situation is bad enough without others having an incentive to make it worse, but the ultimate irony is that the Conservatives have a commonality of interests with the SNP. The Conservatives have benefited enormously from the SNP's rise, both as bogeymen in and of themselves for English voters, but also as a pressure group on Labour ideologically. If they can't win in Scotland on their own, it is the second best thing. As for the SNP, a Tory government was in some ways a boon for them. A Labour minority would have been awkward for them. Contrary to fears of English voters and SNP boasting, a Labour government would not necessarily have been pushed to the left. In fact, a Miliband government might have been so afraid of the perception of being puppets of the SNP they might well have done the opposite; deliberately provoking the SNP on core issues. The only real benifit likely to be provided, the complete inability of Scottish Labour to run against the SNP at Holyrood when receiving their support at Westminster, will happen anyway.

In fact, the Tories now have every reason to play north of the border for the first time in decades next year. With Scottish Labour imploding, there is an opening for the Tories to supplant them as the center-right unionist party, a prospect supported by the recent ComRes poll which has the Tories leading Labour in Scotland 22-16.  While that poll had a minuscule sample, the most recent TNS poll which looked exclusively at Holyrood intentions, had Labour leading the Tories by only 19-15. The Tories would have little prospect of winning, but for them to come second would nearly finish off Scottish Labour by forcing them to decide at some future point whether to support the nationalist SNP or the unionist Tories in a minority situation, with either decision rendering them as irrelevant as the Liberal Democrats. And the SNP has every reason to encourage this possibility, since a Tory official opposition, even if it were to lead to 2-3 Westminster seats rather than 1, would ensure their predominance in Scotland for the foreseeable future. Which is why one should not be surprised if the SNP seems oddly ready to talk about Scottish Tory leader Ruth Davidson next year, praising her campaign and appeal while ignoring Labour.

All of these add up to a multi-level challenge that transcends ideology, or the simple decision of whether Labour should go Blairite or return to the 1980s. The latter is clearly not the answer, but the former is equally impossible. Labour can run as Blairite all it likes, but as long as any potential Labour government is going to be dependent on SNP support, it is impossible for Labour to be perceived by voters as running from the Blairite center.

What Labour therefore needs to do then is escape the trench-warfare approach to politics it has adopted effectively since 2005, when in Tony Blair's final post-Iraq War years, Labour embraced a tactical approach based around both a perceived pro-Labour bias in the electoral system, and a supposed "Progressive majority" within the electorate to believe that they could win through a reliance on being the default, least bad choice for everyone. That this worked in 2005, when Labour won a majority with 35% of the vote, less than the Tories five years later, and came deathly close in 2010, when despite a mere 29% of the vote, Labour still managed 258 seats, convinced Labour's leadership that it was the Tories who had something to prove. If Labour merely repeated its 2010 results, its worst numbers since 1983, then with some Liberal Democratic defections the Tories would be unable to form a government in 2015.

That this unraveled remains a cause of shock for Labour, and has prevented the party from coming to terms with what the unraveling of this strategy means. Since 2005, or at least since 2007, Labour has abandoned any pretense on running on either trust in its leader or a vision for the country in favor of presenting itself in Scotland as barrier against the Tories, to those who voted Liberal Dem as the choice they should have made, and then hoping that UKIP would do their work for them in driving down the Conservative vote totals enough for Labour to win. Labour, however, is not the only or default anti-Tory option in Scotland. The SNP's promise to keep the Tories out whilst simultaneously pressing Labour to move towards the left provided little reason for anti-Tory voters to back Labour, a message reinforced by Labour's own strategy which seemed to be to deny the Conservatives a viable path to 323. At the same time in England, fear of the SNP drove right-leaning UKIP voters back to the Tories, while the protest-voters Labour needed to win back after losing them over Iraq and 2008 remained with Farage's party.

The dangerous thing is none of this is likely to change. Labour's main strategy in Scotland remains to argue that voters should back them because support for the SNP is inconvenient for Labour in England, almost presuming that the voters exist to prevent inconvenience to the party. As long as the SNP is required for a viable Labour government, that threat will exist in England, and that necessity will remain as long as Labour is distrusted in center-right Middle England. Labour errs in seeing this trust as an issue of policy. The problem goes deeper. No one trusts Labour, which is why no one believed Ed Miliband when he made 11th hour conversions on Immigration, and why no one will trust Labour on the EU or spending going forward. The reason is simple. Voters ultimately trust leaders, not parties. A party has a sole interest in power, and as long as the Labour party is seen as being made up of a collection of political hacks whose sole goal is to occupy Ministerial office, then no one will believe they won't make a deal with the SNP or anyone. Blair transcended that by dominating the party to such an extent that every other Labour figure was irrelevant. Voters could not only trust Blair, but they could trust Blair to enforce his will on the Labour party. The problem facing the current crop of leadership candidates is that there is far too much "first among equal" around Liz Kendall, Yvette Cooper, and Andy Burham. They represent factions, and only loosely ideology, but none seem to have personality, character or ambition beyond office-seeking. As such, they will face the same ultimate skepticism that Labour will do anything for power, and all policies and promises are tactical exercises.

Is there an easy solution to this? No, but recognizing the problem is important to finding one, and right now Labour seems almost determined to return to its strategy of victory by default, hoping against hope that the Tories destroy themselves over the EU Referendum, that the economy crashes, that Cameron obligingly retires in favor of someone unelectable. Maybe those will happen, but Labour waited 14 years for the Tories to screw up enough to lose power after 1931 and 1951, and 18 after 1979. Perhaps their time might be better spent on something more proactive.