Labour's Cultural Obliviousness: Responding to Public Concerns on Immigration and the EU 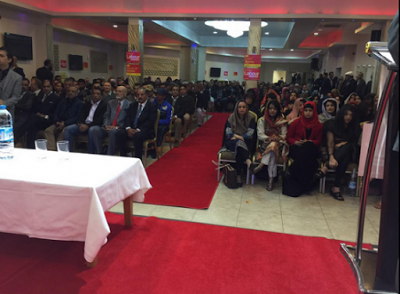 As an American growing up in the noughties, Tony Blair enjoyed the broad appeal of successful British Prime Ministers, and I was to a large degree surprised when coming to the UK with the degree of hostility that Blair seemed to receive. On hand this should not have been surprising; after-all he was a partisan leader.But the vast majority of it came from his own party. The vast majority of times Tony Blair's name came up among left-wing or Labour supporters, it came linked to explosive language accusing him of crimes against humanity and denouncing him.

Yesterday, Labour suffered its worst defeat since, well a defeat fairly typical of its performence without Blair over the last few decades. Labour has won a majority exactly once in the last 50 years without Blair, and it was a marginal and short-lived one in 1974 whose leader, Jim Callaghan was also denounced as a traitor by the Labour base, little better than his Conservative foe Margaret Thatcher.

For all the talk on moving left, what seems lost on too many is that Tony Blair was popular, so popular in fact, that he easily won a majority after the Iraq war went sour. That is not a defense of the Iraq war, but a statement that New Labour, far from being the source of Labour's problems, was an overwhelmingly appealing domestic platform in the center of British politics.

Instead of building on that, Labour has done everything in its power to convince voters that if it were to enter office it would not give them the sort of government they voted for three times, instead providing them with.......what exactly? It was unclear but the problem was definitely not fears it was too right-wing. The Greens were a non-factor this election, and the Tories and UKIP combined for 55% of the vote in England.

Imagine if the US Democrats after their narrow loss in 2000, a loss contributed to by Al Gore's decision to keep Bill Clinton at arms length, responded by implicitly denouncing Clinton as a crook and rapist, and then concluded when they lost to George Bush in 2004 that the solution was that they weren't anti-Clinton enough and that a more stridently anti-Clinton tone would help them win states that only Clinton had carried for Democrats in half a century. The result would have been predictable. But that is basically what Labour have done.

This is not merely about moving to the center. The key part of New Labour in any event was not right or left, but involved dumping left-wing orthodoxy in order to respond to public concerns. In the case of the 1990s, it was on the issues of crime and the economy where Blair broke with Labour orthodoxy accepting that those who disliked crime were not simply fascists but individuals with real quality of life concerns, and that aspiration dominated the British middle class. Today the issues the left has to come face to face with are immigration, sovereignty and the connected issue of the EU. On the former, it is true Miliband mouthed some platitudes and even inscribed them on his campaign tombstone, but this was undermined by the last two weeks of the campaign being spent denouncing anyone who did not favor offering immediate admittance to anyone unfortunate enough to be born in Africa or the Middle East who was trying to cross the Mediterranean of being a racist if not a murderer. Messaging which by the way was reinforced by by years of denouncing UKIP as racist, pretending it was a fake creation of the media that would vanish when the Greens were given equal time, and suggesting that it should be "denied a platform", That was the opposite of listening to public concerns. It was telling the public that they were wrong to even have concerns in the first place. And absent any clear cut plan to deal with a real humanitarian problem, it created the impression that Labour supporters and figures had no problem with letting absolutely anyone in at anytime, only accepting the need for any sort of limits as a purely tactical consideration to those silly voters who were clearly too stupid to realize that what was said in the Guardian contradicted what was said on the campaign trail.

Labour fundamentally fails to grasp the dynamics in which the Immigration debate takes place for many voters, with the issue over simplified into the extremes of voters thinking there are too many immigrants taking their jobs and benefits because they are ill-informed, or disliking certain kinds of immigrants because they are racist and/or Islamaphobic.  In reality, the world is a vastly scarier place than ten years ago, Ten years ago the threat from immigration was "Polish Plumbers" coming to take jobs. Today there is a direct link from a world that seems to be on fire - see the Ukraine/Rise of ISIS, and the immigration issue. When Eastern European migration is directly linked in the public mind with social and economic crisis and collarless - see the conflation of the Greek Crisis, the sorts of stuff going on in the streets there with SYRIZA, the more extreme anti-cuts language in the UK, and Eastern European immigration, suddenly it looks less like importing competition and more like importing other peoples' social conflicts and strife. And as the Tories escalated their own war of words and petty harassment to compete with UKIP, the response on the left turned the issue of EU immigration from an economic one into a cultural and moral battle, which were grounds where UKIP and the Tories really wanted to fight it.

Nowhere are the changes in the world more apparent than in the linkage between events in the Middle East and immigration. Eastern European immigrants are generally queit. But ever since Iraq, there has been a link between immigrant communities from the Middle East and political activism, whether it be on Palestine, or more recently Syria. It is easy to mock this as Islamaphobia, but there is a real problem in Britain one that does not exist in the United States. Middle class kids, the sort of kids I have worked with for Debatemate, or at those sorts of schools, kids who were born in the UK, grew up here, have Iphones, Snapchat, and Facebook are being attracted by ISIS, and in some cases even trying to join it. These are small cases, isolated in raw numbers, but something that genuinely frightens people.

The reason I am pointing this out, is that fear of appearing racist by singling out these particular problems has resulted in a general abstract debate about "immigration" taking the place of the fears of voters who look on TV and see non-stop chaos in Iraq, Syria, Afghanistan, Gaza, then see stories about Bradford West or gender segregated Labour meetings and they fear that Labour is in favor of importing the problems of the outside world into Britain. They are not opposed to helping in people who want to escape the culture that produced the conflict in Syria; refugees from forced marriages, Christians from Syria and Iraq, Gays and Lesbians, would I am sure be welcomed and Labour could get a ton of milage out of them. But the public does not want to simply let in Syrian refugees who were victims of being on the losing, albeit equally murderous and fundamentalist side. And to a lot of people, it looks like Britain is becoming a refuge not for those looking to escape cultures of violence, but for those who were defeated in their wars and wish to continue them from British soil(the Pro-Palestinian movement in the UK I think is singularly guilty of giving this impression).

Are these fears overblown? Almost certainly. But are they based on something tangible and actually real on an underlying level? Unfortunately yes. And the response to them , to denounce any discussion of motivations or types of refugees or the desirability of certain groups as racist, to mock fears about "integration" as Islamaphobia" when the real fear is people continuing the wars from their homelands from British soil, well that is a huge issue.

Labour should be Pro-Immigrant. It should be Pro-Refugee. Especially because we live in a much scarier world and things like the issue of the Gurkhas will arise more often(and god there was a great immigration issue for Labour).But being a refuge does not mean being a place of retreat for individuals and armies unready to give up the fight.

As for the issue of sovereignty or the EU, Labour's approach has made their handling of immigration look like pure Marxist demagoguery. The basic Labour line is that the EU is beyond the comprehension of ordinary mortals, much less voters, and therefore they are unfit to have any input. Furthermore, its anti-democratic institutions are good because they allow policies to be imposed over the head of voters, whose complaints at this high-handed authoritarianism are met with charges of violating the constitution and ignoring courts, or not respecting "human rights".

Not only is this patronizing, but nowhere in it lies an actual defense of what the EU is. And the actual fact is that the EU is not just some module for law grads to write papers on and then brag about them on Facebook. There are in fact significant left-wing critiques of the EU being made throughout Europe, not least from Syriza in Greece or Podemos in Spain. It is almost universally accepted that the Eurozone was a bad idea, and it is implicitly accepted by almost everyone that the EU was expanded too quickly and too greatly. Furthermore there are substantial Europhile criticisms which suggest that the very anti-democratic traits of the EU make it ineffective as a guarantor of the rule of law or of European unity. None of these concerns even get an airing, with Labour and the left instead adopting a pro-EU orthodoxy as inflexible as anything Joseph Stalin might come up with.,

This is important, because right now it looks like panic over a referendum on EU membership is dominating the nightmares of Labour supporters. These fears are overblown. There is little chance most voters will chose to completely exit the EU. Not because none of the criticisms are real, but because the solution is out of proportion to the problem. But Labour suffered badly in Scotland for confusing an overreaction to a problem with a problem not existing, and if the No-campaign is dominated by left-wing voices alternately threatening and insulting the electorate, not only will the outcome be far closer than it should be, but Labour will pay the price of the victory much as they did after the Scottish Referendum. Labour has to accept that there are real concerns about sovereignty, real problems in Kaiser Angela Merkel's EU, and that the French bureaucratic model of anti-democratic governance will never be acceptable to the British public nor should it be.

If Labour supporters, Green voters, or anyone wants to know why Labour lost they should think about these things. Think about why someone like me who has been directly victimized by Conservative immigration policies, nevertheless not only still supported the Tories but actually favored them over Labour on the issue of immigration. There is a lot of room to the left of the Tories on immigration and the Eu. But Labour picked positions that were even more absurd, and approached them with a level of contempt for voter concerns that it is a testament to the favorable maps that they didn't face worse.