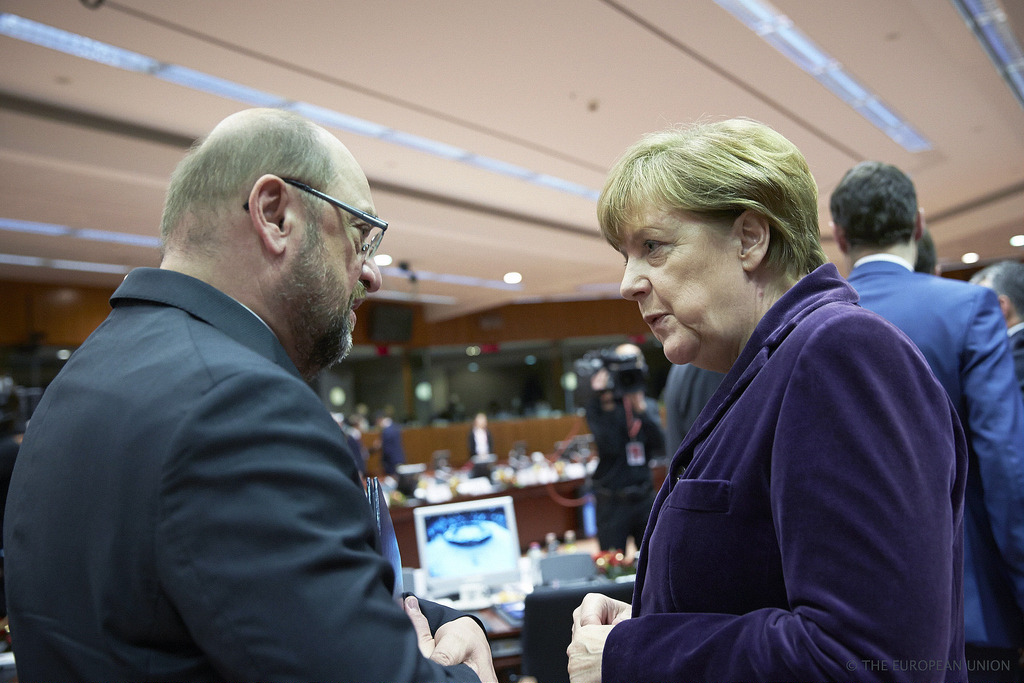 Before the spring is out, Germany’s Chancellor Angela Merkel will face the voters. Despite populist upsurges across the Western world, Merkel faces no serious threat from that direction. Though Germany has not been immune to that trend, with the far-right Alternative for Germany(AFD) polling at between 12% and 14%, more than enough to cross the 5% threshold for Germany’s proportional representation electoral system, the political culture in Germany makes cooperation between the AFD and any mainstream party impossible. In the last election, the Social Democratic party chose to go into coalition with Merkel’s CDU, rather than work with the post-communist Left party, despite the fact that such a combination would have had a majority with the Greens. If the Left’s links with Putin and the old East German Socialist Unity Party were enough to deter cooperation, no one will be chomping at the bit to jump into bed with a party featuring the granddaughter of Hitler’s longest serving cabinet minister.

The result, was more or less an assumption that Merkel, despite any unhappiness over migration, would be elected for a fourth time. Her new government might be with the right-leaning Free Democratic Party, it might again be with the Social Democrats, and it was possible the latter alliance might have to be extended to the Greens, but unlike in Austria there was no talk about bringing the far-right into government, nor questions about who would lead any future combination. Merkel seemed to have beaten voter fatigue. The decision of Martin Schulz, previously the President of the Socialist grouping in the European Parliament to return in order to lead the Social Democratic Party as their candidate for Chancellor has upset such speculation. For the first time in nearly a decade, the Social Democrats, generally mired in the low 20s, are approaching or passing the 30% mark and the support level of the CDU. It would be hard for Merkel to demand the Chancellorship if the CDU/CSU were to come behind the Socialists, even more so if the Greens were added to the combination.

For liberals in Britain and America, desperate for any sign of hope that liberalism has a future or that the Left showing signs of life, are greeting the prospect of Merkel losing with mixed feelings. Natural excitement at the prospect of a left-wing win in Germany is tempered by fears that the defeat of Merkel will remove the figure who in the age of Trump and Brexit has been dubbed the “real leader of the free world.” To bridge the gap there is a tendency to read Schultz’s success as being part of the same pattern as the surge in support for Emmanuel Macron in the French Presidential election.

There are some clear differences. While both elections present the spectacle of a race the center-right could not lose turning into one which they are very likely to be defeated in, the dynamics are different. In France, where the Right has used the failures of President Francois Hollande as an excuse to do nothing to reinvent itself since 2012, there was always a constituency for a third option beyond returning power to the other half of the discredited elite. In Germany, by contrast, the Social Democrats have been in government for the last four years. There are few if any policy differences, which up until now has been a serious problem for the Social Democrats. This surge is not about politics, or populism, but about Merkel.

Angela Merkel will have been Chancellor for 12 years this spring. That is a very long time for a leader in a democracy. Tony Blair barely lasted a decade, and by the end not only the electorate, but his party was desperate to be rid of him, even if it was to their later regret. Margaret Thatcher was also removed after 11 years,  while Michael Howard of Australia suffered a defeat in which he lost his own seat in year 11. A decade of rule presents a perfect storm of danger for an elected leader. Their contemporary rivals for the leadership, who might pose a threat during the early years of a premiership have generally departed from the scene, and their own protégés have long since reached the peak of their careers, occupying the great offices of state. By year 10 or 11, the leader has begun promoting a new generation of protégés, often individuals who were staff or advisers during their early period of government, and the first generation of protégés begin to fear that the heir apparent will be selected from among this group. Either they force an early retirement now, or they risk being bypassed. That is why leaders almost inevitably face internal rebellions at around this point. They can survive them; both Pierre Trudeau and Konrad Adenaur did, but even victory tends to leave the victors exhausted, the ruling party left with a collection of too-young nonentities with the destruction of its political elite.

Merkel has dominated German politics to a greater degree even than Thatcher, all the more so for never having had a majority on her own. Early rivals like Christian Wolff or Edmund Stoiber are long since dispatched. It is hard to remember Merkel’s selection for Chancellor came at the end of a troubled process, one in which she was passed over in 2002. Today she stands alone over a desert. She has cleverly prevented the accession of rivals by elevating her coalition partners into key positions of visibility, the Free Democrat Guido Westerwelle as Foreign Minister, the Socialist Steinmeier as his successor and most recently German President.  The result has been to deny any other Christian Democrats a chance to rise up at the national level with the exception of Wolfgang Schäuble, her Finance Minister since 2009, who at age 74 this year can have no leadership ambitions of his own beyond potentially serving as an interim pick in the event of a CDU defeat, something that until a few weeks ago seemed impossible. Anyone who wanted to rise up had to do so at the state level, the reason why so much criticism of Merkel on the refugee issue has come from state premiers and why it has failed to have an impact. They are ultimately powerless against Berlin.

Merkel, in effect was safe from everyone except the voters, and the rising populist environment in which the Left and AFD seemed likely to win 25% of the parliament between them ensured that it would be impossible or near impossible to form a government without the CDU/CSU or those parties. In such a circumstance, all Merkel had to do was to maintain a lead over her erstwhile partners in the SPD, something that she had managed since 2006. That the political alignment of a decade would shift suddenly could not have presented a bigger shock.

Perhaps it should not have. Merkel, the master political operator, has covered all of her bases except for that of her popularity with the public. Ironically, in the pursuit of her mastery of the political space, she has actively sacrificed popularity with the public, most recently over her decision to accept over a million migrants into Germany, one that she has been trying to walk back in recent months. But to describe the problem Merkel faces being based on migration is an oversimplification. It has undoubtedly the CDU/CSU 5-7% of the vote to the AFD, but it does not explain the surge in support for the SPD, which appears to be coming directly from CDU/CSU defectors in recent weeks. In fact, the AFD has lost support in that period, falling from 14-16% to 12% or so in most polls. Rather it seems to represent a rallying of voters who are tired of Merkel, who previously had no option but to cast protest votes, who now that they perceive a viable alternative option, are strategically rallying behind it.

There is an interesting question of what happens in the event of a “near tie”. The two most recent polls have the CDU/CSU + FDP and SPD+Greens at 39-38 and 39-39 respectively. The FDP will be loath to be the third partner in a SPD/Green combination, having gone from a historic high in 2009 to not even entering parliament in 2013 after an unpopular stint in government. In turn, the Greens have rejected previous efforts by Merkel to woo them, and would see much of their leftwing support desert to an SPD in opposition if they were to enter the government. On a wider level the smaller parties have no particular reason to be the ones to keep a Merkel who has suffered a major electoral defeat, as that is what winning 32% of the vote and the worst ever result for her party will be perceived as, in office.

That also colors the alternative, namely a continuation of the “grand coalition” with the SPD. Would it really possible for Merkel to demand to remain Chancellor following an election in which her support dropped from 42% to 33% and that of the SPD rose from 24% to 32%? Would it be easy for the SPD to accept that? She might face pressure to step down, and could even wish to do so, but as with Gerhard Schroeder in 2005, her departure would leave the CDU without a leader, and hence candidate for Chancellor, thereby ceding the office to Schulz by default.

All of these problems are likely to be discussed as the campaign progresses and the reality that Merkel could cease being Chancellor settles in. The consequence, I suspect, will be a war between voters’ instinct that they are ready for change with their fear that there is no alternative. That for the CDU/CSU to drop to 32-33% but still come first, or even a close second is a recipe for chaos, instability, and no clear policy at a moment when the EU faces the challenges of Trump, Brexit and Putin. In that conflict, I suspect fear will win out over change one last time for Merkel, aided perhaps by a wider reaction to Trump’s election which will persuade wavering voters that the devil they know is better than to risk all on a gamble. Merkel will outperform the polls, and score a moral victory but that will be all. If she makes the mistake of sticking around to 2021 she will lose badly, as her mentor Helmut Kohl did in 1998, after he failed to heed the message of his own 11-year scare four years earlier.

Schulz is attractive, but his main contribution is likely to be not as Chancellor in 2017, but rather as the mechanism for restoring the SPD to relevance as the alternative party of government after the Merkel hegemony, and thereby laying the groundwork for a decisive SPD victory in 2021. Even if the SPD remains in government after this year’s election, it will not be looked upon as a helpless accessory but rather in the context in which it could have won in 2017, and therefore very much could win in 2021.

As for outside observers, a Merkel win, especially if it is misrepresented as a “come-from-behind” triumph will be greeted with a host of articles declaring it a verdict on Donald Trump or a vote of confidence in the EU. The reality is that there has rarely been an election this, well, domestic in a European state in recent memory.  It is just that as Merkel’s international stock has risen to unprecedented heights and American liberals need her more than ever, her own voters are feeling increasingly that they are welcome to her. Germany, however, is getting bored.