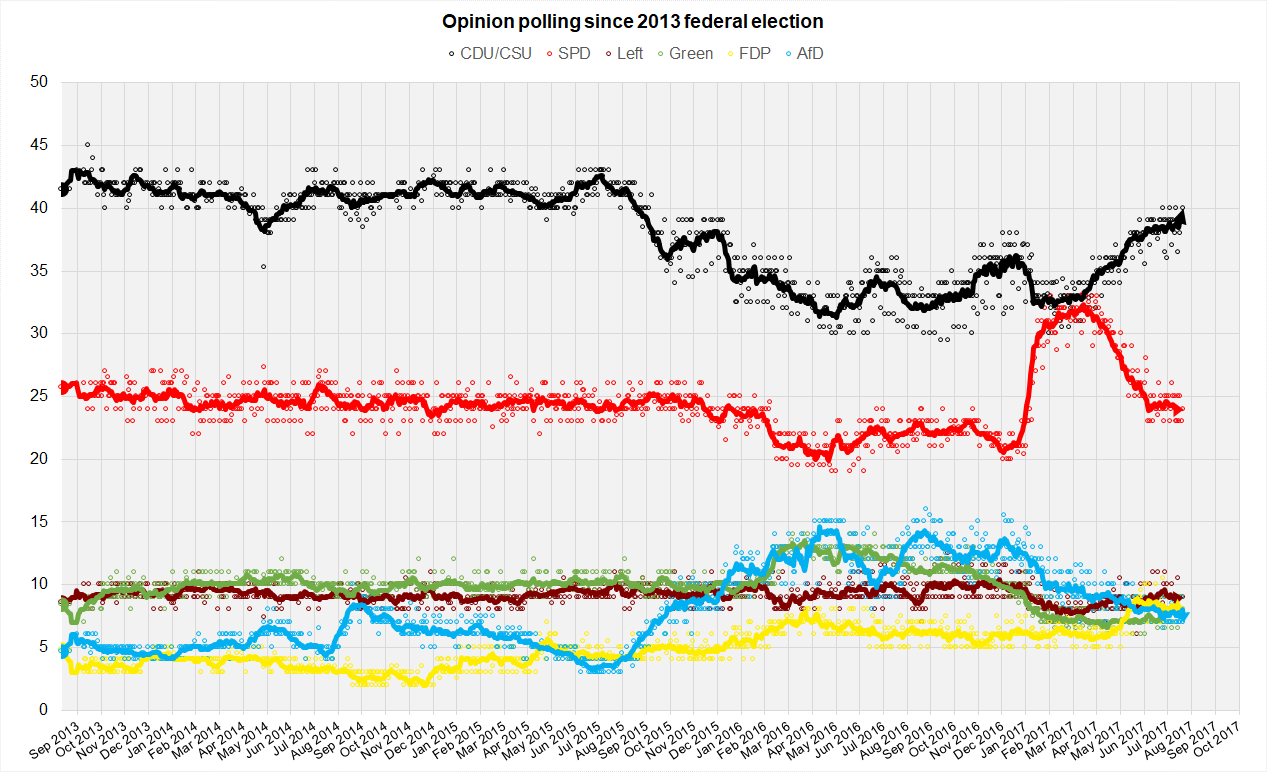 In the next three months no less than three European nations will go to the polls. On September 11th, Norway will hold a general election, to be followed by Germany’s on the 24th of September, and Austria’s on October 15th. Much of the narrative in Germany has focused on the degree to which the challenge that SPD leader Martin Schulze appeared to pose to Merkel has dissipated since this spring, with Merkel’s CDU hovering between 37% and 40%. Some commentators have then gone on to cite this evidence of how Merkel’s success demonstrates a vindication of her decisions during the refugee crisis, a position seemingly strengthened by the decline of the far-right Alternative for Germany, which has fallen to 8-11% in the polls from the 14-16% it was polling last summer(though this would indicate at least a doubling of the party’s 2013 level of support, when it failed to meet Germany’s 5% threshold for representation in the Bundestag. Even at the lowest level of support in polls, 8%, the party would go from 0 to 50 or so seats.). This is not entirely fair. The AFD has had problems all of its own making that have prevented it from matching the performance of its counterparts elsewhere in Europe, including leadership squabbles and a failure to expel actual neo-Nazis from the party’s local chapters. But the larger point stands. The far-right, which seemed to pose such an existential challenge last fall after the shocking victories of Brexit and Donald Trump, seems to have crested, at least for now.

That conclusion is supported when one looks beyond Germany at Norway and Austria. Norway’s current center-right government in fact is supported by the far-right Progress Party, which is predicted to lose nearly half its support even if the government is reelected, which is too close to call in current polling. Austria is even more striking, not least because Norbert Hofer, the candidate of the far-right Freedom Party, narrowly failed to be elected President last spring by a margin of 50.3% to 49.7%, and the FPO has led polls for almost four years, often in the 30-35% range. This fall, the Freedom Party has fallen to third, averaging between 23-24% in the face of a reinvigorated center-right People’s Party led by 30 year old Foreign Minister Sebastian Kurz. With the concession that even 22% would represent an increase from the 20% the party managed last time around, and that Kurz is almost universally expected to form a government with the FPO after the election, this must be disappointing for a party that was aiming at the Chancellorship and Presidency just a year ago.

So in all three European countries, the far-right or populist opposition appears to be in decline, a pattern reinforced by the crushing defeat suffered by Marine Le Pen in France’s elections this spring. Equally true, and less analyzed is who the far-right/populist right is losing to. Except in Norway, where the far-right was complicit in supporting an incumbent center-right government, the populist right is losing not to the Left, center or far, but rather a reinvigorated center-right. In both Germany and Austria, the Social Democrats are flirting with their worst results since the Second World War. Nor can they even claim to have clearly coopted the center-right. While one can make an argument that Merkel represents a cosmopolitan approach to immigration issues due to her actions during the refugee crisis, Merkel herself has dialed back her own policy, making clear that the influx from the summer of 2014 can never happen again, closing the door she herself opened, and tightening the rules for those already present including making it easier to expel refugees from states where conflicts have ended. Combined with the complete failure of the AFD to undertake even the basic cosmetic break with National Socialism that the FPO in Austria, founded by veterans of the Waffen SS, undertook, Merkel’s success is a mixed endorsement for “liberalism”. It indicates that if mainstream conservative parties make moves to shore up their right flanks, and are lucky enough to be faced with a completely ineffective and self-destructive competitor to their right, then voters will forgive a past(and potentially temporary) liberal approach to refugee issues.

Austria, by contrast, presents both a better case for the thesis that the populist wave has crested, and that the prerequisite for containing that wave is to coopt many of the complaints driving it. Austria’s Freedom Party is a formidable force. It took part in governments during the early 1970s(when Austria’s Jewish Chancellor, Bruno Kreisky, responded to criticism from Simon Wiesenthal that his cabinet included two Nazis with the declaration that “I decide who is a Nazi), and again between 1999 and 2006, with the party even finishing first in the 1999 elections. While it moved dramatically to the right following defections after 2006, it nevertheless recovered to win 20% of the vote in 2013, 34% in the Vienna state elections in 2015, and 49.7% in the Presidential race last spring. To reduce it to 23-24% therefore required not merely for the OVP(Peoples Party) to wait for it to implode, but to actually steal support.

That the OVP has done, but it has had the advantage of possessing one of the most charismatic and popular figures in Austrian politics in the person of Sebastian Kurz, who wisely avoided taking up the party leadership until the campaign began. That allowed him to function as an internal critic of the government’s refugee policy without taking responsibility, until he was ready to trigger the current election by engineering a political crisis over the refugee issue. Kurz therefore only assumed the leadership at the moment he was prepared to bring down the Austrian government and force an election over his opposition to taking further refugees and to accommodations for those already present, a sure-fire way to identify himself with the FPO’s issue. Furthermore, the FPO’s own acceptability worked against it here. There was no prospect in the Netherlands or Germany of anyone working with either Geert Wilders or the AFD meaning that votes for those parties could never be more than anti-system protest votes. In Austria however, the very strength of the FPO, it was polling as high as 35% last year, and the unpopularity of the grand coalition of the Social Democrats and People’s Party, changed the equation. Whereas support for the FPO was driven higher by the fact that it was the only way of registering opposition to the grand coalition, the very success made it likely that the next government would include the FPO. The question then shifted to who the FPO’s partner would be – the Social Democrats(not as odd as it would be elsewhere, and has been tried locally) or the Conservatives, and whether the FPO would be the senior partner with the Chancellorship. Kurz, by effective political showmanship and self-promotion, put himself forward not as an alternative to an FPO role in government, but as the preferred head of such a government.  By destroying the current coalition with the Social Democrats and making clear he preferred to work with the FPO on the FPO’s issues, he won over soft FPO voters who did not trust the party with the Chancellorship.  That cooption has been successful electorally, at least so far, but it remains to be seen if it “boxes” Kurz in when he is in government.

As such, the major trend in Europe is a resurgence of a center-right which has successfully absorbed or coopted critical parts of the challenge to its right. The one major exception to this trend is Britain, though the degree to which that is true is relative. Theresa May definitely set out to coopt and absorb a large portion of the UK Independence Party into the Conservative party. Her failure to do so, whether due to an inapt campaign or an excessive focus on economic issues, may or may not be due to unique circumstances. It is worth noting that the Tories faced the electorate, like the Norwegian center-right, as an incumbent government that whatever its immediate polling, had presided over politically unpopular austerity policies. Whether the presence of the hard-left Corbyn in contrast to the pro-EU Schulze or the apolitical technocrat  Christian Kern in Austria made a positive difference is something the jury is still out on. There is definitely a case for it, which reinforces the idea that the current trend is a win for “neoliberal radical centrism”.

That said, mainstream politics in most of Europe seems to have survived this challenge, albeit in the way conservatives generally have, by absorbing the challengers to their right and coopting their issues. The major characteristic of Western politics for the last decade, the lack of an effective center-left outside of the United States, continues, and arguably is likely to be even worse if the Social Democrats come third in Austria and join their German counterparts at 22-23%.