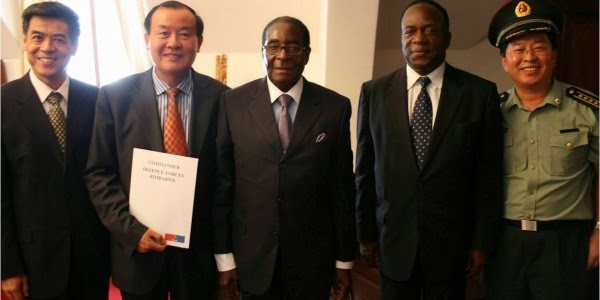 There are few constants in the world, but those that are tend to be fairly reliable. The sun will rise in the West, Middle East peace initiatives will go nowhere, and betting against Robert Gabriel Mugabe is a really bad idea. The eighty-eight year old leader has seen off at least two likely electoral defeats in 2000 and 2008, as well as attempted internal coups in 1999 and 2006. At last weeks Congress of his ZANU-PF party he achieved perhaps his most dazzling success, at least given the odds. Against the will of the overwhelming majority of his party's membership, provincial and national leadership, and Parliamentary MPs he not only secured the 2018 Presidential nomination for himself, but the Vice Presidency for his chosen successor, long-time Security Chief Emmerson Mnangagwa.

At first the odds seemed surprisingly long against Mugabe despite his 2013 electoral "triumph". Going into this year's conference which was slated to select the party's 2018 candidates, the position of Vice President Joyce Mujuru seemed strong. Mujuru was constitutionally next in line for the Presidency, and had strong connections to the army, having herself fought in the war against Iain Smith's government, as well as being the widow of former Army head Solomon Mujuru. The latter had died in a mysterious fire after plotting against Mugabe in 2006.

Mujuru certainly acted like a front-runner. She took a leading role in working with the Movement for Democratic Change ministers during the National Unity Government of 2008-2013, and cultivated the few remaining foreign investors with promises of change when she took over, according to Wikileaks even working with the United States Embassy. She was popular with ZANU-PF voters who by now were tired of the constant chaos of Mugabe's later years. This allowed her supporters to seize control of nine out of ten provincial ZANU-PF chapters in this year's primaries, which should have all but ensured her triumph.

But all of these factors were liabilities. Mujuru was easy to betray as a liability to those who had gained from the confiscations of wholesale theft, or from the indiginization programs, including a requirement that foreign firms ensure that at least 51% of their investments were owned by locals which she opposed. Her ties to America in turn made it easy to portray her as a traitor, and were used to devastating effect by her foes. In fact, Mujuru is arguably the highest profile casualty of the Wikileaks cables, and one that Chelsea Manning likely did not even consider when leaking.

Critically, Mujuru managed to alienate Grace Mugabe, the first lady, who began to fear for her position if an implicitly if not explicitly anti-Mugabe figure took over the party and the country. When Mijuru blocked Grace's bid to enter politics by taking over the ZANU-PF woman's organization, fear turned to bitter enmity, and Grace allied with Mujuru's chief rival, Mnangagwa. Grace even went so far as to claim Mujuru was planning to have her killed. In a series of coups, eight out of ten provincial ZANU-PF heads were impeached in the ten days leading up to the conference, with Mujuru herself being de-selected as a delegate. At the conference she was condemned for fostering factionalism and her close allies in the Cabinet, almost half its membership, were sacked. In its aftermath, Mugabe replaced her with Mnangagwa despite it being unconstitutional, though Mugabe suggested she could have survived had she been willing to "apologize" to Grace.

Emmerson Mnangagwa, nicknamed the "Crocodile", is an ominous figure whose official biography is somewhat bare, as the IBT profile's brevity indicates. An old-comrade of Mugabe who ran security for him first in the bush, then in government, Mnangagwa is tied to most of the regime's most brutal actions, from a crackdown in the 1980s which used to North Korean mercenaries to kill more than 250,000 civilians, to Mugabe's battles with the MDC, with Mnangagwa having served as Mugabe's campaign manager in his 2008, and 2013 reelections. Mnangagwa is also closely tied to China, being seen as China's man in Harare much as Mujuru was seen as Washington's.

Yet things are not quite that simple, and political alignments in Zimbabwe take on another level of complexity when the 1990s are considered. While the architect of the 1982-85 crackdown on the Black opposition Mnangagwa used the political influence he gained with Mugabe to become the greatest proponent of reconciliation with the White community and Western interests during the 1990s. After the abolition of the Prime Minister's office in 1988, Mnangagwa became the de facto chief Minister, pursuing free-market policies such as deregulation, the de-politicization of the courts, and IMF-encouraged balanced budgets. He also made himself a scourge of corruption, which is where his rivalry with the Mujurus originated. Soloman Mujuru as the commander of the Army represented an important interest group, and while Mnangagwa was able to force Mujuru and his cronies out of economic activities at home, he was not able to keep them out of intervention in the Democratic Republic of Congo, which rapidly turned into a center for resource and arms running in the hands of Zimbabwean officers loyal to the Army commander. Nor did it endear the Army to Mnangagwa when his system ran into trouble after the ascension of Tony Blair in 1997.

Blair came into office determined to end the misuse of Foriegn aid, and to mark a break with the realist policies of the Major government which had made Britain one of the strongest supporters of the Serbs in the Balkans. He set his sights on Zimbabwe, where money Britain was providing for land reform was being used to pay the salaries of soldiers and to buy political support from key factions. In a strictly legal sense, Blair's objections were justified, but they missed the subtly of the situation. Mnangagwa needed money to maintain support, especially once he had to compete with the profits Mujuru was managing to extract from his Congo adventure, yet he also wanted to keep the economy growing which required not seizing the most obvious source of capital, namely white-owned farms. In effect the British money was being used for land reform, because it was being used to allow Mnangagwa to meet his political and governmental expenses without having to seize the land wholesale.

The withdrawal of British funding therefore set off a sequence of events that destroyed Mnangagwa's position, and ultimately Zimbabwe as a whole. It undermined Mnangagwa's position at the very moment that the IMF was forcing him to cut pensions, leading to mass protests by "War Veterans" angry over their failure to receive land after the war, and now even the pensions they were promised in its place. In this environment of weakness, all of Mnangagwa's, and Mugabe's enemies gathered - liberals, veterans of two decades worth of opposition groupings, labour unions, Mujuru's faction, and white farmers, and in 1999 when a new constitution went to referendum that would allow Mugabe to run for another term it was defeated 55-45. The humiliation was total, and fatal to Mnangagwa; Mugabe who had allowed him to run the country for a decade, now found that not only had his Minister's policies failed, but the very people who benefited the most from them, white farmers and the middle class, were the first to to turn on ZANU-PF when the party showed signs of weakness. The 2000 Parliamentary elections were turned over to the Army, which putting its experience in the Congo to test engaged in an unprecedented campaign of violence which allowed ZANU-PF to score a narrow 63-57 victory.

Mnangagwa was sidelined, being cut out of the 2002 Presidential race, and then fired from the cabinet entirely in 2004. The Mujuru's by contrast looted the country, seizing half a dozen farms for their own use, while their army degenerated into a ravenous mob. With few viable challengers after the 2005 Parliamentary elections, they became arrogant, trying to offer themselves to foreigners as the only couple that could restrain the forces they had unleashed. In 2006 they tried to force Mugabe to commit to not running as the ZANU-PF candidate in 2008, and Wikileaks revealed that Joyce

Mnangagwa by contrast had remained on the sidelines until the catastrophic first round of the 2008 elections saw Mugabe win only 42% of the vote officially(Mugabe recently suggested that MDC candidate Morgan Tsvangirai actually won 73% of the vote) and ZANU-PF lose control of parliament. Orchestrating a run-off campaign that combined targeted violence against MDC supporters with psychological pressure on their leader, Mnangagwa ensured their withdrawal and Mugabe's almost uncontested reelection. Rewarded with the Defense Ministry, he purged Mujuru loyalists, reconciled foreign interests, and courted Chinese support. The 2013 elections were as much his triumph as Mugabe's.

Mnangagwa's ascension is therefore a defeat for Western policy, but not necessarily for Western interests, or Zimbabwe beyond that. Mnangagwa currently stands for Chinese influence, continued autocracy, and for the defense of the corruption of senior figures such as Grace Mugabe, but with the exception of his Beijing ties, he is a late-comer to all of these interests. The Mujuru's bore far more responsibility for Zimbabwe's current position and turned into moderates only when their ambition demanded it, while Mnangagwa shifted to ensure his political, and perhaps even personal, survival. The result is the ascent of one of Zimbabwe's craftiest, yet least known figures as Mugabe's heir apparent. Were the 1990s reflective of his real views? Does he, like Mugabe bear whites and the West a grudge for their political betrayal? Or has he been opportunistically navigating between different interests to maintain his position? Only time will tell.