Closing the Gap? The UK Elections 14 Days Out 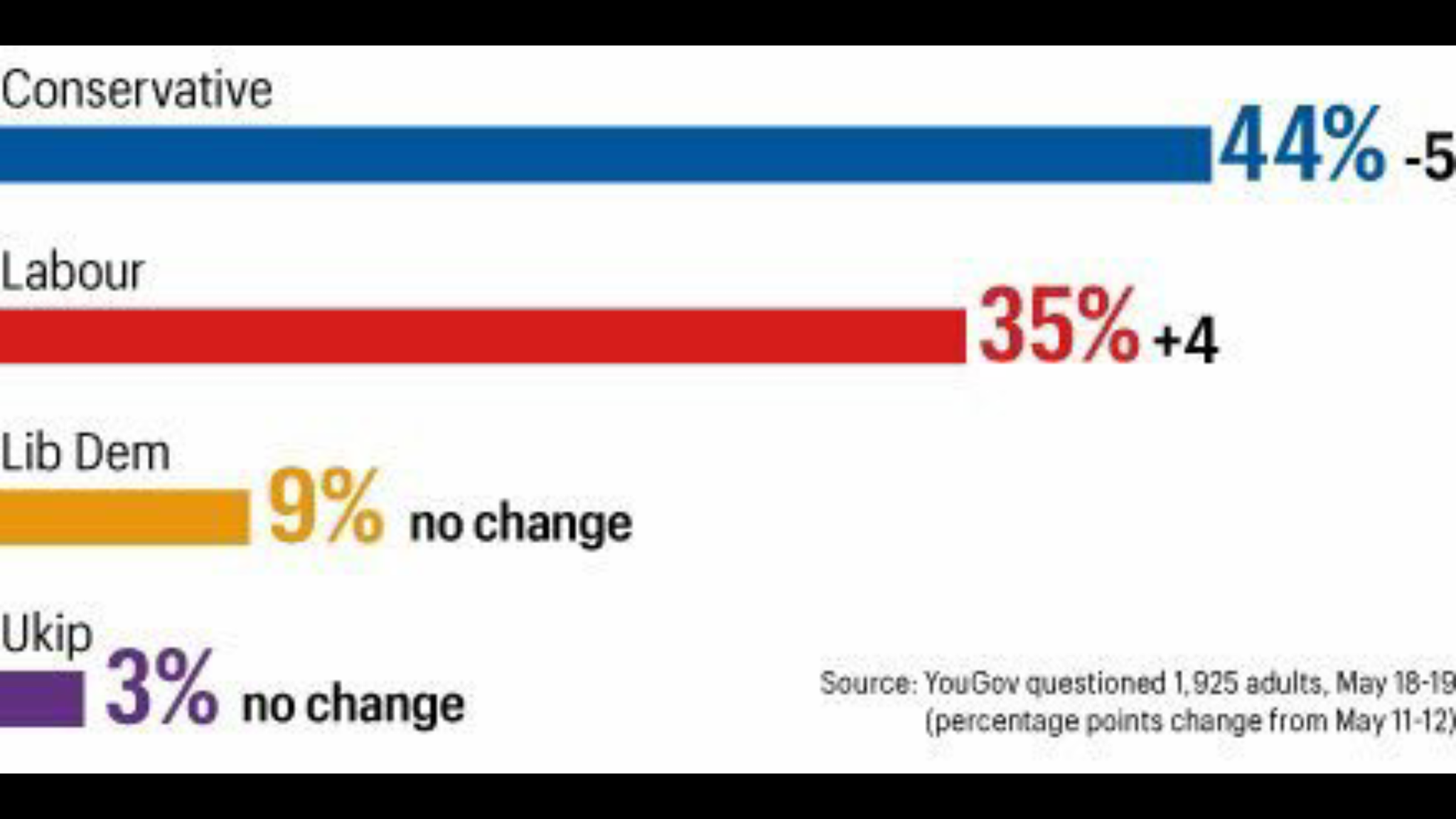 Two major factors continue to be evident. First, Labour appears to have consolidated a degree of support across the board, mostly at the expense of smaller parties. From being in danger of falling into the mid-20s a month ago, Labour now looks set to at least match its 2015 performance. At the same time, this shift has not caused the smaller Tory leads. In fact, variations in the size of the Tory lead are almost entirely down to reported support for UKIP, with the smallest lead(12%) featuring in a poll with a combined Conservative and UKIP vote on the higher end(53%). With UKIP not standing candidates in a third of seats it really seems implausible that the party will end up at the higher end of its range of support.

That was, at least, the case until the most recent YouGov poll. As can be seen above, the fall in Conservative support already occurred in the previous sample, where it was matched almost exactly by an unusual doubling in UKIP voting intentions. Almost certainly an outlier, that UKIP support could have been expected to fall in the subsequent sample as it did. Yet rather than going to the Conservatives, that fall in UKIP support went to Labour. Whether this is significant or not requires waiting for further data, but as is evident from the comparison above, this represents the first substantial drop in over a year in the combined support for UKIP and the Conservatives. Has the Tory manifesto finally succeeded in driving "Blue Labour" voters back to Corbyn? Let's consider that possibility for a moment.

The major story, one I previewed more than a week ago, is that Labour under Jeremy Corbyn, once seemingly headed for the worst performance since the 1930s, appears to have stopped the bleeding and consolidated support. It has ironically done this so well, that the narrative is beginning to shift from “can Corbyn beat Ed Miliband’s 2015 vote share?”, which appears to have been the major goal of the Corbyn-led campaign, to the much more dangerous(to Labour) question of “could Labour win?”.

Before dealing with the latter issue it is worth noting that for all the criticism aimed at Labour’s leader, and given the disabilities his team have operated under – a shadow cabinet denuded of almost all talent and of doubtful loyalty, limited message control over MPs,  a hostile relationship with traditional Labour media spin doctors, not to mention the nationalist environment created by Brexit – Corbyn is running a fairly decent campaign. Early on his team seem to have concluded that as they trailed by 20 points or more, victory was not seriously on the table, and this in turn freed them to run a vote maximization campaign aimed at the leadership election which was sure to follow June 8th. This could be achieved by being able to win a higher percentage of the vote than Ed Miliband(31.2%) which would allow them to claim that at the least their internal party foes would not have done much better, and could be blamed for the party doing worse than it otherwise would have done. While likely motivated by self-interested and factional concerns, the ironic result has been to provide the party with a much more coherent message than it has possessed in years. Constrained by the need to appeal to marginal seats in middle England and deluded by polling showing the Tories far short of a majority, the 2015 Labour campaign was an exercise in risk avoidance. Labour messaging was to stress a series of things a Labour government would not do – increase immigration, raise taxes, work with the SNP – rather than any sort of positive image. Ironically this had the opposite effect. By spending so much time denying that he intended to work with the SNP, Miliband assisted Tory efforts to suggest he would do exactly that, while at the same time the decision to stress continuity in economic matters right down to keeping George Osborne’s fiscal targets meant that there was no real debate to be had on the economy. Bored, the media and voters understandably focused on personalities and emotional concerns.

Labour’s manifesto this year is entirely different. It promises something for everyone. Free university, greater benefits, more vacation time, regarding the EU the impossible juxtaposition of an end to freedom of movement and membership of the Common Market. True that is impossible, and the rest of the promises are not costed, but that really does not matter very much.  The entire debate around Brexit is delusionally out of touch with reality across the board, and the Tories rendered unintended assistance by keeping the internally unpopular pledge to reduce net migration below 100,000, thereby eliminating any ability on their own part to attack Labour for unrealistic or impossible to deliver promises.

That has not been the only assistance Labour has received from the Tories. For all the talk of May’s abandonment of “Thatcherism” and bid for “Middle England” the Conservative manifesto looks less like a campaign document and more like an experiment in precisely how far the party can push its luck. May was clearly reflecting the sentiments held by many Tory MPs, including herself, that the issue of Fox Hunting was unfairly used by Tony Blair to stir up malicious class and personal resentments, but there was no need to beyond promising a free vote to indicate that May herself intended to support its restoration. The whole issue also could have been buried in the back of the document. Confronting the issue of the “Triple Lock” on pensions was something that was universally seen as necessary by the entire political and media elite, and in isolation it could have been sold as a politically beneficial act of personal bravery, but the handling of the winter fuel subsidies raises serious questions about planning. First announcing the policy, then suggesting it might not be applied to Scotland, then in response to outrage backtracking on that again, managed to ensure that absolutely everyone was familiar with the policy in its most exaggerated form. On a wider level, the interaction of these policies has created the impression that on a holistic level, the Tory manifesto is one of pain and suffering. Potentially necessary pain, but nothing to look forward true. It is truly a strange approach to make voters, even the ones supporting your party, view the prospect of your future government with dread.

There are two possible explanations. The first is the one favoured by most observers. That the Conservatives do not believe they can lose, and therefore see this as an opportunity for dealing with a host of difficult polices. There may be truth to this, but absent strategic sense it implies an exceedingly high level of hubris less than a year after a Prime Minister’s overconfidence resulted in Brexit. Another possibility is that Labour’s rise is precisely what the Conservatives want. Lynton Crosby has always thrived on close races. He is a negative campaigner, focusing on the terrifying prospect presented by an opposition victory. In 2015, that was the threat of an SNP-Labour government. Today it is the “coalition of chaos”. That approach is poorly attuned to a situation in which the Tory lead is insurmountable, in which there is a real threat of swing voters either not voting, or risking protest votes for parties like the Liberal Democrats or UKIP. By polarizing support between Labour and the Conservatives, Crosby has killed UKIP and quite likely has eliminated the threat, serious as of a few months ago, that the Liberal Democrats might make serious inroads among Conservative remainers.

Under this theory, Labour’s “surge” is exactly what CCHQ wants to be occurring at this moment. It ensures that the following week will focus not on the Tory manifesto, but rather on the prospect of Corbyn as Prime Minister. That in turn, suddenly renders germane both the limitless stashes of opposition research on Corbyn such as his relationships with Hamas and the IRA – but also all of those attacks on a “Coalition of Chaos” which will suddenly look plausible. Furthermore, Corbyn, who has hitherto received sympathy as a perceived underdog will be evaluated as a potential Prime Minister, and even a large portion of Labour voters do not want him in that role. This “closing” sets up the last two weeks to be about Jeremy Corbyn.

That Labour might still end higher than Miliband’s 2015 result and the Tories nevertheless win a 100+ seat majority is a bonus, especially if it leads to continued instability in Labour, or better, Corbyn hanging on. Theresa May’s premiership has seen a surprising degree of cooperation on a tactical level with Corbynites, in the Commons but also on narratives. This would be an extreme example, albeit one in keeping with precedent.

It is also why we should not be quick to read too much into the trend lines. The trend itself is likely to become a major issue in voter decisions, and as such there  is likely to be a ceiling on Labour support absent Corbyn improving his currently dire numbers as a potential Prime Minister.