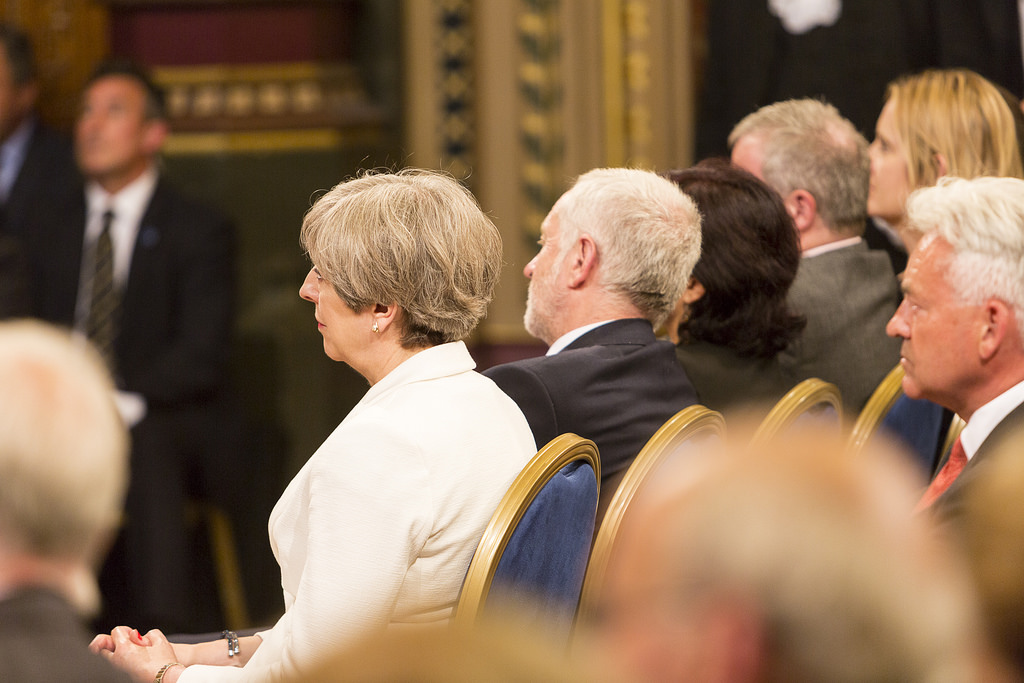 Karl Marx, whose ideas are now once again in fashion among those who were never required to read his works, once wrote that events repeat, the first time as tragedy, the second as farce. It is only fair then that process begun by a “meaningful” referendum presented to the British public in 2016 which was denuded of specificity by its author in the expectation of its meaningless only to have that effort backfire when voters projected their hopes and dreams onto Leave, would be succeeded by a “meaningful” parliamentary vote, equally drained of legal force until its very symbolic nature ensures its passage. A specific proposal for Leaving the EU would have required supporters of leaving the European Union to defend a plan; a specifically defined “meaningful vote” in Parliament on whatever Theresa May’s government can produce in the form of a deal would equally require those supporting rejection to specify what they favor. Is it remaining in the EU through a second referendum? A different deal? No deal? Instead, supporters of all and none of those options can unite in voting for chaos in the reasonable expectation it cannot possibility be worse than what is on offer. Schrodinger’s referendum is about to conclude in Schrodinger’s parliamentary division.

It is interesting to unpack how Theresa May’s government has gotten to this point. Sometime this week, Oliver Robbins, her effective deputy for EU negotiations will return from Brussels with a withdrawal agreement. It will, all in all, not be the worst deal imaginable. The UK will maintain financial passporting, the ability of its banks to trade within the EU. It will retain access for goods subject so some restrictions. Due to political sentiment in many EU states, it will achieve at least a nominal end to freedom of movement on its end, whilst many EU state simultaneously legislate in favor allowing UK citizens to continue to live and work. The so-called “four freedoms” at the heart of the EU project – goods, services, capital, and persons – will be stretched in the UK’s favor.

This deal will come at a cost. Some of this cost will be predictable. The EU is the stronger party, it has rules and no need to bend them further than is necessary, and furthermore, a stated incentive to ensure that the UK is worse off outside the bloc than within. This latter motivation is to be fair played up too much. Even if it did not exist, odds are the results would be the same as the EU’s interests in this process line up with its desires. A bigger problem for the UK is the position of Northern Ireland. The EU, of which Ireland is a member, cannot allow the re-imposition of a hard border. The logical option for the rest of the UK would be to jettison Northern Ireland. It is an economic drain, and there is no viable way to ensure that there is no hard border between Ireland and Northern Ireland, a hard border between the UK and the EU, and no border whatsoever between Northern Ireland and the rest of the UK. Instead, for political reasons, the UK will pay a dear price for a temporary UK-wide “backstop” which will leave it in a worse version of the customs union it could have negotiated directly which in turn is still worse than EU membership.

The problem then is not that Theresa May’s deal will be a particularly bad one. It is that any possible deal will be bad, and the particularistic demands of UK domestic politics, especially regarding Northern Ireland, have ensured that this one will be much worse than needed. That any other viable agreement would have most of the same objectionable clauses, or the fact that the UK already signed the so-called “backstop” which would keep Northern Ireland within the EU in the event of no deal being reached last December, are the defenses offered by the Prime Minister and her supporters. But while to a large degree true, they suffer the same disadvantages faced by advocates of Remaining in the EU during the referendum campaign. While it was possible to talk about how leaving the EU would be bad, and that all of the various options for doing so if the voters elected to follow that course would be bad in particular ways, each of those outcomes was hypothetical, and most were preferable to the status quo to at least someone.

The same is true of Parliament’s decision regarding Theresa May’s Brexit deal. The government has at various times tried to claim that to defeat the government’s deal would be to opt for a no-deal Brexit, and part of the reason for requiring a vote was an effort to head this off. Nonetheless, it was always nonsense. “No deal” is as much a deliberate governmental policy as any deal is, and it requires a government to carry it out. Even if Parliament by voting down the government’s plan, was not rejecting “No Deal” it could follow it up by voting in a government which would. As such, the vote is not in favor of anything, but rather against the government.

Denuded of any specific policy value then, the “meaningful vote” is reduced to an expression of sentiment on the one issue almost everyone can agree on, namely the government’s proposal for the Brexit process. Among Brexiters, the hardliners see this approach as a betrayal, while the more sensible see it as an inevitable disaster for which they would like to shirk the blame. For Remainers it is the last chance to avert a disaster. For Labour leavers it’s a chance to leave with a Corbyn government. All groups who have no other interests in common are united against the government.

This is not say there isn’t a more coherent alternative. The resignation of Jo Johnson, the Transport Secretary and his decision to call for a Second Referendum is significant not in and of itself, but what it represents, namely the extent of the desperation of Tory Remainers. They have always been certain Brexit would make Britain worse off, but until now they have seen Theresa May as the lesser of two evils, keeping out hard-line Brexiters and Corbyn’s socialists alike, and perhaps hoped that events would result in Brexiters bringing her down without the need to dirty their own hands. But with the prospect that May might get a deal, and that enough Brexiters and moderate Labourites might support it to pass, they are faced with the prospect of disaster. Britain locked into a catastrophic bad deal, the Conservative party blamed, and the economic harms of Brexit followed by a certain Corbyn government. In such circumstances, drastic action is justified.

Hence Johnson’s resignation. His decision to vote against the government is not a sign its Brexit policy is bad. That has always been his view. Rather, it is a demonstration that Remain Tories and the British economic elite is desperate enough that they are willing to risk bringing down May and ushering in a Corbyn minority if it means stopping Brexit. Why, if Corbyn will inevitably become Prime Minister anyway if Brexit goes through, is it not better to bring him in now, and have him do the dirty work of betrayal?

The script then is simple. A cross-ideological and party alliance votes down the government’s proposal, and then, absent the Brexiters some combination of Remain Tories, Liberal Democrats, and the SNP work with Labour to force through a second referendum. The Tory party is saved. Britain is saved. Even the Brexiters are saved from the political consequences of their folly, and allowed to cry “betrayal!” which may appeal to some of them.

There is one problem. This vision requires Labour cooperation, and in doing so it makes the error of assuming that Jeremy Corbyn is Alexander Kerensky, not Vladimir Lenin. Kerensky, the revolutionary socialist, who nevertheless agreed to accept power from the elites in impossible circumstances in order to head off revolution, and compromised himself in the process. Lenin, even had he been asked, would never have been so foolish as to take power in Russia in February of 1917, when defeat against Germany, mass starvation, and economic chaos loomed.

Much has been made of Jeremy Corbyn’s Euro-skepticism. This is likely beside the point. What matters is whether he is interested in office or power. Most British politicians crave the former, and the offer of residence at 10 Downing Street, no matter how short the tenure or its conditions, would be leapt at. But Corbyn has never sought office, never held a cabinet role. Rather, he has fought for causes. And he is at this moment near to victory. With Brexit, the British elite, the business interests, the metropolitan class, the Conservative party, all have committed suicide. If Britain exits the EU with either a bad deal or no deal, all will suffer an irreparable blow, both directly from the economic consequences, and indirectly due to acquiring citizenship abroad. The blow to morale among the cosmopolitan wing of the left will undermine Corbyn’s rivals, while with the Conservative party taking the blame, Corbyn can be assured of sweeping into power whenever an election is held. And he will sweep in on his own terms, with a majority, indebted to no one. All he needs to do is insist that the people have voted, and that there is no time for a second referendum. Without his willingness to form an alternative administration which would conduct a referendum, no such administration can be formed, and therefore no referendum held no matter what parliament says.

Why then would he sacrifice all of that to save his enemies from disaster? Because that is more or less what is going to be asked of him in the weeks to come. Johnson, centrist Labour supporters, the media all believe that the deal they are offering him – office in exchange for merely accepting the need for a second referendum, is generous. But he does not need them to achieve office or power. They absolutely need him to stop Brexit. And this misreading is likely to be fatal.

The government is almost certain to lose its “meaningful vote” but what follows depends no on Theresa May, Jo Johnson, his brother, Brexiters, or even Parliament, but Jeremy Corbyn. Corbyn can likely be in office by the end of the month if merely concedes a second referendum, but with that potentially as his sole footnote to history. Or, he can keep May in office, powerless, on course for the cliffs after which he will pick up the wreckage. Things have come full circle. Not just in terms of votes but men. Corbyn, not Farrage or Boris Johnson, is potentially the true last man standing.