The Shifting Consensus on Cuba: How the Left Fell Out of Love With Engagement 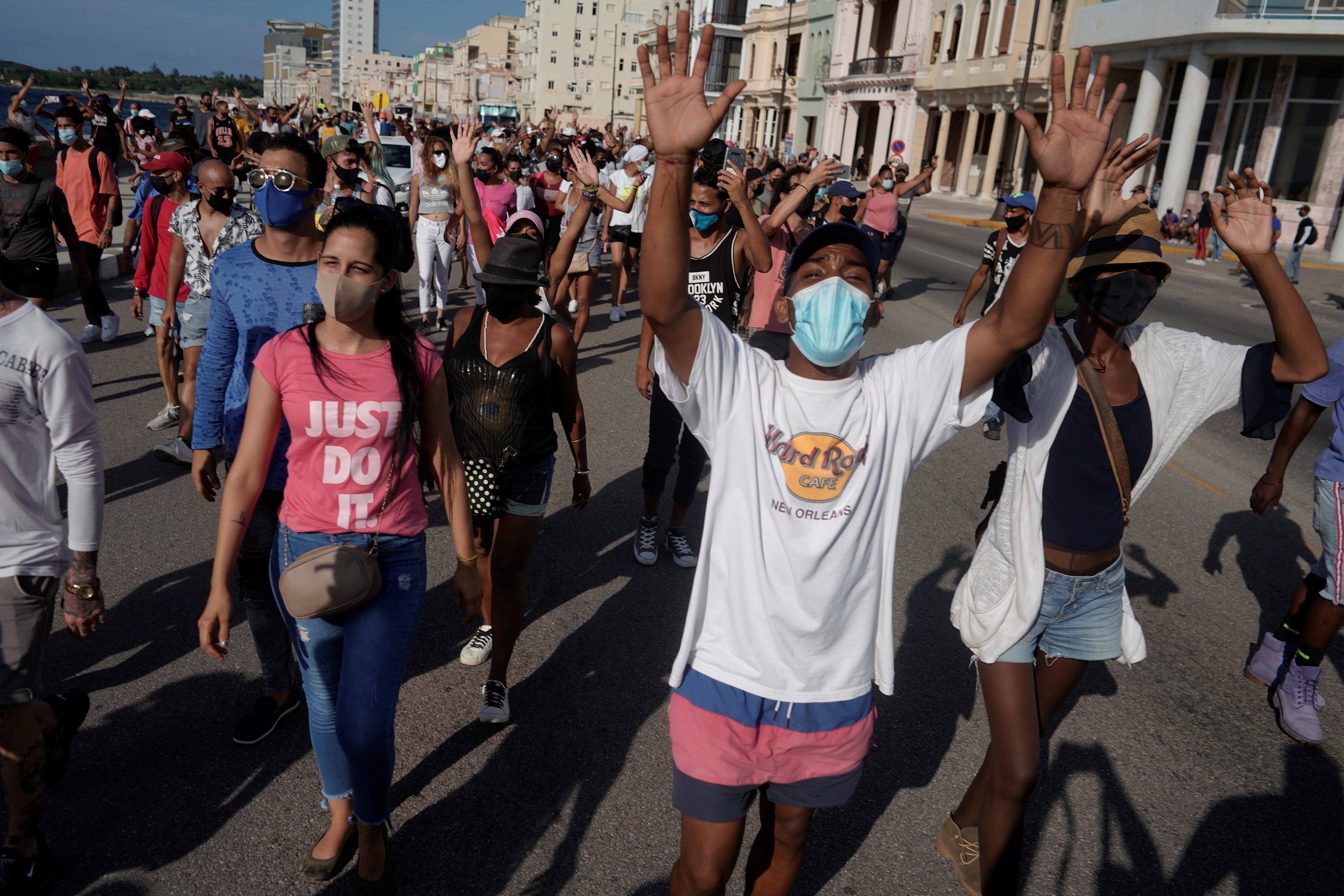 It’s easy to forget that it was just weeks ago that Biden was widely accused of betraying the citizens of another long-suffering country: the people of Cuba. In truth, both Biden and his Republican critics, distracted by events on the other side of the world, are right now missing a rare and potentially fleeting opportunity to help liberate the Cuban people from their decades-long nightmare. To do so, both Democrats and Republicans need to move beyond their old partisan habits and recognize that the latest protests in Cuba represent a truly revolutionary movement.

To understand why, consider that for nearly sixty years, one of the world’s most autocratic and oppressive regimes outside of North Korea has remained in power less than 120 miles from the United States. For that entire period, both Republicans and Democrats, while paying lip service to regime change, have used predictions of the Cuban government’s imminent demise from internal factors as an excuse for their own inaction. The debate over the most recent protests—with those on the Right arguing that with some more sanctions and louder rhetorical support the protestors would be able to topple the Communist regime, and those on the Left arguing that if left alone the protests will provoke internal reform—is yet another example of denial masquerading as policy.

Two major myths sustain America’s approach to the Communist regime in Cuba. They are the myth of the regime’s normality, and hence its capacity for reform, and the myth of its permanence, and therefore the futility of any action aimed at changing the status quo. Both myths have persisted for decades in spite of obvious and abundant evidence to the contrary.

This myth is old and dates back to the misconceptions surrounding Fidel Castro’s regime during its early months when the Cuban leader coexisted with anti-Communists such as Huber Matos within his own movement, and moderate politicians in his puppet government. This allowed wishful thinkers, including some in the CIA, to delude themselves that Castro was a Cuban nationalist first, and a Communist second, forced into an alliance with the Soviet Union by American hostility. The implication was that if only the United States abandoned its hostility toward Havana, Cuba would reciprocate, not merely with international behavior but also with domestic reform.

Matos, who led Castro’s military forces before being tortured, imprisoned, and eventually exiled to Miami, along with the men Castro allowed to serve as puppet President and Prime Minister, could have—and did—tell American officials better. Che Guevara and Fidel’s brother Raul were militant Stalinists from the start, intolerant not just of capitalists, Americans, and liberals, but even of Socialists or any non-Soviet aligned Communists.

Even on the spectrum of Communist dictatorships, Cuba has never even presented the pretense of pluralism. Eastern European countries, Vietnam, and even China maintain a façade of plurality with fake political parties aligned with the Communists in National or Popular Fronts, along with elections. Castro did not even bother to form a rubberstamp National Assembly until 1976, 17 years after he took power. In effect, Castro was not interested in even the appearance of state building.

This is important, because there is a difference between regimes which are opposed to the United States for reasons of simple self-interest and those which are opposed purely on ideological grounds. The former can be influenced by incentives if strong enough. Ronald Reagan and George H. W. Bush were successful in Africa and Latin America because many of the “Communist” regimes ultimately wanted to take advantage of the mineral and oil wealth of their nations, and to do that they needed to democratize, cease support for terrorism, and embrace an international system they benefited from. But since its revolution, Cuba has never approached the world the same way as its nominally Communist neighbors.

Cuban leaders from the beginning have been ideologically opposed to the entire conception of the modern state. That means elections, an independent judiciary, property, and individual rights. The delay of 17 years before even creating a fake Constitution and only then under Soviet pressure is proof enough of this.

But the strongest evidence of the Cuban regime’s continued adherence to rigid ideology came over the past several years during the government’s “consultation process” for a new constitution. Billed as the greatest reform project in history, it captured the imagination not just of Obama administration officials, who took the process at face value, but leftist academics and activists around the world who descended on Cuba to attend thousands of local meetings where the Cuban people were asked what they wanted. And, in fairness to the regime, they did seem to seriously ask. They even pretended to ask exiles to take part.

Ironically, the lengths to which the Cuban government went to appear to listen to its people and foreign sympathizers ultimately underscored how little it cares about their opinion. Excited foreign observers reported certainty that the new Cuban constitution would usher in multi-candidate races for office, the direct election of the president, and, in a PR move, same-sex marriage. The 135,000 local meetings showed overwhelming support for these measures.

Yet when the Communist party presented the draft to the puppet National Assembly, not only was direct election of National Assembly members moved to “municipal bodies,” which are controlled by the Communist Party, but the President would be elected by the Assembly, not by the voters, the one thing left-wing sympathizers reported support for at every meeting. The final document also defined marriage as between “one man and one woman”.

The bait and switch should make clear that the Cuban regime, rather than being Machiavellian, is at its heart ideological. It actually believes its own lies. A more Machiavellian regime would not have run an open consultive process to discover what the population wanted from their new constitution, only to then ignore it entirely, thereby discrediting itself in the eyes of its sympathizers who would feel, rightly, that they were duped. Only a regime which truly believes that it does in fact represent the people, and that it knows better than the people what the people need, could behave in such a blatantly self-defeating way.

That is the key lesson the Left and Democrats must learn about Cuba. The Cuban regime will not and cannot reform, and it cannot be budged by concessions. All such policies are based on the premise that the Cuban regime themselves secretly believe that Communism has failed, that democracy is better, and that therefore the only challenge is bribing them sufficiently to allow it to come to pass. But the Cuban regime is not driven solely by self-interest. They are real, genuine, ideologues.

Republicans, on the other hand, have a blind spot of their own. Republicans have always understood the reality of the Communist regime in Cuba, but they have nonetheless failed to grasp the power of the “idea” of the Castro Regime – in other words, the persistence of the idealized version of Cuba’s “successes” that the regime wishes to project out to the world. Examples of this include the often-cited but misleading statistics about the Cuban education and healthcare systems. That “idea” of a successful nationalist Cuban regime is so clearly nonsense, Republicans have largely responded to its persistence with frustration and anger. The problem is that lies, if believed widely enough, are powerful. Even before 1959, people wanted to believe in Castro, despite the evidence.

The Right is therefore in danger of missing the significance of what has changed over the last few years. Having long written off the center-left and Democratic-Socialists as potential allies, the Right is dismissive of how much has been changed by the Left’s disillusionment with the farce of a constitutional reform process. If they were never going to be of use anyway, why does it matter if they have finally realized there is no hope for reform?

Well, quite a lot, actually. Recent protests are driven by despair. COVID has a role. But on a wider level, the regime, by consulting the population on a constitution and then ignoring their demands, has proven to all Cubans that there is no possibility for reform. The regime will never willingly allow competition, opposition parties, or genuine liberalization. The significance of the revelation that there is no way forward on reform cannot be overstated, and it is driving the despair of those who previously had too much to lose from violent resistance as long as peaceful change had even the slightest prospect of success. It no longer does.

The Right is also overly wrapped up in their domestic political victory in Miami-Dade in 2020 to realize that they have won the larger policy debate on Cuba. Joe Biden’s Cuba policy is that of Donald Trump, not Barack Obama. Some of this may be fear of Florida voters, but Cuba has genuinely burned its bridges with the center-left. Many of its former defenders feel used, lied to, and betrayed.

The result is that the Emperor is Naked. The Cuban regime is weaker than it has ever been. It lies exposed before the world. Not as a mythical nationalist state, but as a North Korea in the Caribbean, ruled by ideologues with no concerns for the interests or desires of their own people, content to allow them to die to export chaos and suffering abroad, and with an almost religious hostility toward the United States.

Change in Cuba was always blocked by the mythical promise of an easy road of engagement and internal reform. That was the justification for the European Union and Canada to maintain trade ties, and the hope that someone like Obama would follow suit kept the regime alive. That is gone. At the moment, it certainly appears that change can only come from the removal of the regime.

Having won this debate, Republicans should work on building the largest consensus possible that the Communist regime must go. There will be time enough to settle past scores later. Former dupes and fools should be welcomed aboard if they admit their errors. This regime does not have to be permanent.