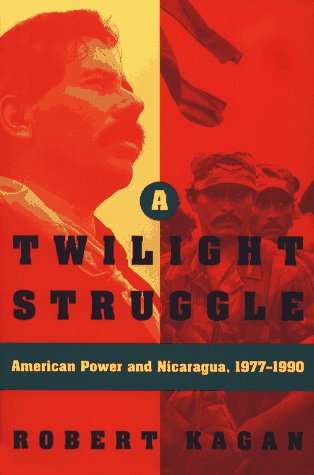 US Relations with Nicaragua are in the news again, with the highly publicized confrontation between newly elected congresswoman Ilhan Omar of Minnesota and the Trump Administration's newly designated coordinator for policy towards Venezuela, Eliot Abrams. Abrams, who headed the State Department's Human Rights division during the Reagan Administration plead guilty to misleading congress regarding the Iran-Contra affair in 1991, something Omar was quick to highlight. But Omar, who has been trying to use a perch on the Foriegn Relations Committee to achieve the fame that Ocasio-Cortez has managed on domestic affairs was after bigger fish. Namely, US policy in Latin America during the 1980s which she, and much of the left, now view as deeply immoral if not crossing the line into "war crimes".

I use "war crimes" in the hypothetical manor, because it is unclear if Omar, or those who share her views have a coherent legal view of what "war crimes" actually are, or what they believe Abrams is responsible for. At most he played down reports on crimes committed by a foreign government to congress. That may be doing his job poorly, but even that is dubious. Abrams was appointed by the democratically elected President Ronald Reagan to do the job the way Reagan wanted him to, which he did. How that amounts to complicity in crimes carried out by paramilitaries in a foreign state, much less legal complicity is a mystery. Nonetheless, it is an article of faith that he is a war criminal.

That is because Abrams carried out American policy in Latin America, which it is now also increasingly a matter of faith for many younger left-leaning Americans, was at best an immoral one and at worst a criminal enterprise. Omar is not an outlier in this respect, at least regarding her generation. Working at an American liberal arts school, students will regularly cite a long list of examples of US interventions to overthrow democracy or damage Latin American states. Yet when pressed for details they will show an almost total ignorance beyond a year, a date, and a one sentence claim. Among the most amusing was the suggestion that the US owed reparations to Mexican workers due to "destroying their economy through NAFTA". When pressed on how NAFTA had "destroyed Mexico's economy" I was informed that it had allowed the importation of cheap corn under-pricing local farmers. That may well have been the case, but if so, the very act of under-cutting local farmers would have been through lowering food prices for the vast majority of the population. The very complaint betrayed the sort of conservatism that all too often permeates discussion of indigenous groups on the left, and is often applied in a patronizing manner to Latin America. Rather than individuals with the same right and desire to live in a functional nation with rule of law, affordable food, and an economy, they are instead portrayed as a unique cultural environment. Capitalism in the form of outside corporations is an invasion, one which upsets the local culture and form of life. Inefficient feudal farming was an integral part of "indigenous" Mexico, and NAFTA, by lowering food prices for the vast majority of Mexicans and thereby undermining feudalism, was destroying Mexican society and culture.

This myopia goes a long way to explain the almost Manichean worldview that the left has adopted when it comes to the history of United States involvement in Latin America. It would be absurd to claim American involvement was disinterested, and Kagan would be the first to argue it has not been without serious mistakes. His book is in fact a chronicle of them, including a number which took place during his tenure. In particular he argues that the opposition was wrong to boycott the 1984 Nicaraguan elections, and American officials should have tried to discourage them from doing so. It was not, however, as the left would have it evil. Conquest is rarely profitable,especially when it involves poor areas. Whatever one can say about American involvement in Latin America, or most "Imperialism" for that matter, it was a money loser, with all due respect to some modern day quacks who calculate astronomical sums based on hypothetical. American policy, whatever its flaws, was self-interested in pursuit of an objective. That objective was the uniquely Anglo-American obsession with stability. American statesman, like their British counterparts, were offended by disorder whether it be internal in the form of disorder, or external in the form of conflict between states in proximity to their territory. They associate financial and governmental disorder with physical disorder. Here lies the dirty little secret of Anglo-American Imperialism. Latin America with its weak governments beset by coups, chronically in debt to European powers, and foreign nationals from every country on Earth presented a horrifying sight, much as post-Mughal India did to the British. The chronic indebtedness was an invitation to foreign intervention, a danger demonstrated by the French invasion of Mexico in the 1860s, and for American officials, economic instability was linked to political instability. Without a stable revenue base, and a government which lived within its means, bankruptcy was inevitable. A bankrupt government could neither pay its soldiers to remain in power, nor protect property rights. American intervention in Latin America was designed neither exclusively to protect investors nor to keep out radical governments. It was designed to promote stability and "help." It was merely an article of faith, based on centuries of Anglo-American experience, that a stable government was impossible without a stable economy, and stable economy could only be maintained by a government which maintained property rights and the rule of law. American officials were not opposed to land reform or socialistic policies per se; they often advocated them, especially when it came to feudal agricultural sectors. They were opposed to populist measures which would drive governments into debt, which American officials were convinced would destabilize countries, invite foreign intervention, and eventually require the United States to take direct action.

US policy towards Nicaragua in the 1980s was a disaster. The Contradoras were an imperfect tool, and American officials would dearly have liked if perhaps a third of them had dropped off the face of the Earth. But the situation as a whole was a disaster, and one which left limited options other than to exercise leverage. Rather than a Left-Right, Imperialist-Liberation struggle as figures like Bernie Sanders perceived the conflict, the reality was more complex. The Sandinistas had inherited power almost by default. The actual core party around Daniel Ortega had limited control over the armed forces which had fought the Somoza dictatorship, and in fact Eden Pastora, the rebel leader who had seized the National Assembly building in 1978 would join the Contras after falling out with Ortega, but was nominally in coalition with moderate politicians. As with Castro in 1960, Ortega had promised elections, but realized that elections would shift power from himself and his armed rivals to the civilian liberal politicians who would easily win. Unlike Castro, Ortega did not immediately decide to break entirely with liberal forces, but a wider situation left him few choices. Castro had a monopoly on force, which he used to turn a fringe political position into absolute power. Ortega did not. Not only did he face remnants of the old National Guard, but also rivals within the Revolutionary Movement like Pastora. The answer, as it was for Castro lay in the Soviet Union and Cuba. Marxist rebels were fighting insurgencies in El Salvador and Honduras and Ortega gave Cuban forces free reign to operate in exchange for support. This in turn forced him into confrontation with the United States. The US dearly sought to avoid a break with the Sandinistas and repeatedly offered recognition and millions in aid if the Sandinistas would cease allowing foreign forces to attack Honduras and El Salvador from Nicaraguan territory. This, Ortega could not do without undermining his own position and as a result the Carter Administration imposed full economic sanctions in 1980.

Those sanctions were not an effort to overthrow the Nicaraguan government. In fact, they were not even an effort to remove Ortega. The Carter Administration dearly wanted a settlement and sought to pressure him. Nonetheless, the sanctions triggered a political crisis that polarized Nicaragua and forced everyone to chose sides. Many within the Sandinistas were horrified by the sanctions, and felt that Ortega's Soviet ties were threatening both the party and the revolution. Pastora led a group of senior Sandinista military officers who objected to the increasing Soviet presence. Ortega responded with force. Having no choice, Pastora took up arms, soon allying with remnants of the Somoza National Guard. Facing a military threat, Ortega now fully embraced the Soviet connection, using Cuban troops against his domestic opponents who turned to the United States with the argument that they were fighting against Soviet domination of Nicaragua. Even had it wanted a settlement, and the Carter Administration, along with Reagan's first Under- Secretary of State for the Americas Enders did, they could not allow the defeat of Pro-Western forces which meant that the US had to provide enough aid to keep them in the field. At the same time liberal politicians and civil society groups found themselves caught in-between. Staying with Ortega meant becoming fig leaves for a Pro-Soviet regime and issuing denunciations of Yankee Imperialism. Joining the Contras meant aligning themselves with Pastora who had little time for them, and the National Guard Contras who had tortured or murdered their friends under Somoza.

Mistakes were made on all sides in Nicaragua between 1979 and 1983 and neither the United States nor Ortega wanted the war which followed. Yet it is hard to see how it could have been avoided given the dynamics at work. It was not a reactionary Reagan Administration which imposed sanctions but the liberal Carter Administration, and the basic conditions the Carter Administration set for any settlement remained the terms the United States sought through 1990. A cease-fire, and free elections which would allow for the political elimination of both the Sandinistas and the Contras.

In 1990 that was precisely what happened. Valerie Chamarro was the wife of a newspaper editor killed by Somoza, and she had served with Ortega on the original 5-person directory in 1979.  But the road was long, and it is an open question whether that outcome could have been accomplished earlier. Kagan is highly self-critical. He does believe the decision not to force the Contras to take part in the 1984 elections were a mistake. Nonetheless, he maintains that the reasons for the boycott, the environment of violence and intimidation by the Sandinistas meant that any election would lack the legitimacy to resolve the conflict. His objection is one of tactics, that the boycott weakened American leverage.

No such doubts afflicted those who saw the conflict in black and white terms at the time or those who still see it that way today.  That is a pity because the Twilight Struggle in Nicaragua was a tragedy, all the more so because it was one that no one wanted yet seemed impossible to avoid. It illustrated the choices that policy-makers all too often must face in the real world. The retreat into moralizing ignorance by the American Left was one more tragic element of the story.