The Invisible Bridge: The Fall of Nixon and the Rise of Reagan 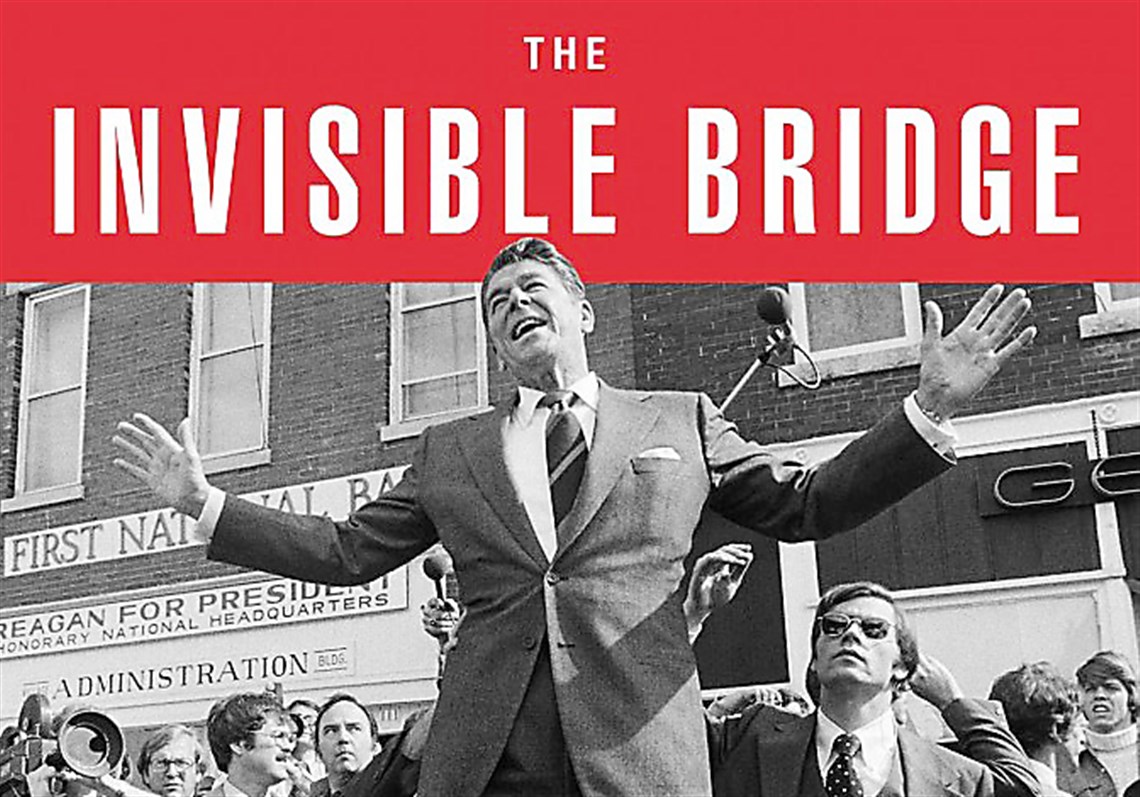 I have just completed Rick Perlstein’s The Invisible Bridge, the followup to his earlier, Nixonland, on audiobook. Reviewing Perlstein’s work objectively is hard, because while talented, Perlstein is not a particularly objective writer, nor has he made much effort to be  since his first work on Barry Goldwater’s 1964 campaign, Before the Storm. Bias in and of itself is not a problem. Nixon is among the most divisive figures in American history, and Ronald Reagan, beset by biographers that turn him into either a saint or a charlatan, deserves, in the words of AJP Taylor, a biographer who will try to understand him.

Perlstein makes no such effort. The Reagan who emerges is two-dimensional. A man who lives a blessed life in an ideal world of his own creation, and is used by those around him, indifferent to the impact on the lives or others or even his own family. Actually, the Reagan in this book exists in 2.5 dimensions. Perlstein can’t quite decide whether Reagan was dupe or duper. Was he genuinely aware of the contradictions in his public statements, or of the domestic tensions between his wife and daughter? Or was he aware and not care. Even if one accepts the basic left-wing vision of Reagan, those are the real questions around which controversy swirls. Perlstein avoids it by alternatively claiming both at various points in the book, often in contradiction with previous segments.

Reagan then, in Perlstein’s view, is both a delusional dreamer, in which the world is a Hollywood film in which everything will be settled in a happy ending, and a dishonest sociopath, willing to blatantly lie to get ahead. That being a deluded idealist and a scheming sociopath are mutually exclusive does not matter. Perlstein will in one chapter martial evidence for Reagan’s ignorance of world affairs, and in the following dissect how Reagan’s “impromptu” address at the 1976 Republican Convention was potentially nothing of the sort, being scripted to the smallest detail.

That is not the only problem with bias, nor is Perlstein’s deep-seated hostility to the Vietnam war, which leaves him unable to reference it in a passage without condemning the conflict as some sort of moral stain on the national honor, or a crime against humanity, with extensive passages given over to paraphrasing the justifications of North Vietnamese apparatchiks given to families of American POWs. The greater issue is that it clouds his judgement about the relative importance of events, individuals, and movements. Perlstein is entitled to his views, but he is ultimately trying to write a political and cultural history of a political movement and country. As such, his interest should be in the country’s views. Instead, genuinely insightful segments that try to understand the rising evangelical movement by focusing on the battle over school textbooks in West Virginia are paired with more numerous and longer segments devoted to fringe left-wing groups, activists, or counterculture events. Patty Hearst’s kidnapping and trial were a major issue at the time. But in the grand scheme of US history, Hearst and the Weather Underground were irrelevant, as no less a figure than later California State Senator and then SDS leader Tom Hayden would attest. It was the fight over science textbooks in Charleston West Virginia that previewed the future of the country, not anti-war activists, not secularism represented by films like the Exorcist, not those who agonized over national sins during the bicentennial.

Perlstein choses a critical period, 1973-1976, and a critical subject; why despite an overwhelming ascendency in the political and cultural spheres following Nixon’s impeachment, the Oil crisis, and the failure of the Vietnam war, it was the New Right, and not the New Left, that emerged ascendant in 1976. He then proceeds to profile the losers rather than the winners, with no effort at comparison between them. The closest we get is the failure of pro-choice forces at the 1976 Republican convention to force a vote on their minority platform calling for the party to avoid a position on the issue of abortion. Yet even here, his explanation of their failure is the ascendency of the New Right, with no effort to explain precisely why that ascendency came about in comparison to their pro-choice foes.

Nixonland had many of the same issues, but ultimately it had an explanation in class. Richard Nixon was driven by his resentments against cultural and political elites who never accepted him, and his voters echoed those resentments. Right or not, Perlstein had a theory he wished to advance as to why Nixonism worked. It was a theory, that broke through the editorial asides, snide comments, and discourses into fringe antiwar figures no one ever heard from again. In a sense, the very attitude the author adopted in Nixonland made it work. Perlstein clearly hated the conclusions he reached, but he nevertheless respected them, and wanted to make that clear to his readers.

By contrast, Perlstein seems genuinely befuddled as to why the New Right won what we can call the war of Nixonian Succession. He was insightful enough to realize that their victory was absolutely critical for everything that happened over the next four decades of American history, and that it occurred in the period when it should have been least expected to happen, 1973-76 in the aftermath of Nixon’s achievement. But having decided to write a book, he clearly has nothing to say beyond leaving the reader with the same question of “why?” with which he began.

Ironically, the ingredients for a stronger thesis are present within the Invisible Bridge if one cares to find them. The “liberal” project may have been predominant in 1974, but it was a victory won through forfeit on a technicality. Nixon had been elected by one of the largest popular margin in American history over the candidate of the “left-wing critique of America”, and the dust thrown up by Watergate served to distort the fact it was not the unelected Gerald Ford who lacked legitimacy, but rather the anti-Nixon forces, who defeated in 1972, had seized power through the courts and congress. Perlstein is quick to dismiss such views as Nixon appologism, but when one considers November 1972 rather than August 1974 as the point of departure, it is no longer shocking that Gerald Ford came so close to winning the 1976 Presidential race for the Republican party. It is rather impressive that a Democrat managed to win at all, given the party had one a single state in 1972, and 43% in 1968.

The 1972 defeat revealed far more about the relative strength of a “New Left” critique of America which saw the country as inherently flawed or sinful, than the Watergate crisis. Watergate at most discredited Nixon. It did not, despite the willful self-delusion of contemporaries and Perlstein today, vindicate Nixon’s opponents, except in a negative sense regarding Nixon personally. As such, they entered a period of cultural and political predominance as a minority. Yet rather than approaching it with caution, they acted as if Watergate was an electoral mandate greater than Nixon’s 50 state landslide. The political assault on the CIA, on abortion, on religion, on education, in the form of school bussing, were all acts reflective not of political consensus and an American public suddenly skeptical of their own government and country, but of an elite minority finding itself in power by accident. That the voters ultimately rejected them as a false start is not a mystery; the voters had never endorsed them in the first place, on the contrary, they had rejected them when presented with the platform in 1972

Perlstein’s book then is flawed because its fundamental premise is flawed. He presumes that Watergate transformed Nixonland into Mcgovernland, and that somehow Mcgovernland almost saw Ronald Reagan win the nomination of the GOP in 1976, and the New Right ascendantly biding its time until 1980. He therefore struggles to explain a 180 degree shift in sentiment between 1973 and 1976, failing. His failure was inevitable because the reality was there was no such shift. The issues which powered Reagan in 1976 also powered Nixon’s victory in 1968 and landslide in 1972. The dirty secret of Watergate, the one that really needs to be told, is not how much it changed, but how very little. It scarred a generation of the nation’s cultural elite, but barely touched most voters. The percentage of the two-party vote won by the Republican party in 1968 to 1988 shows ascendency where 1976 stands out not for being a shocking strong GOP performance but rather a weak one–, 51%, 65%, 48%, 56%, 59%, 54%. It is the only election in twenty years where they lost the two-party vote, and it took Watergate, a primary challenge which almost unseated a sitting GOP president, and a massive gaffe at the lone debate, as well as a recession to bring it about. America was not a “leftwing” country at any point in the period. All of the movement and soul searching Perlstein discusses was among a small elite, and the major consequences was the separation of the American cultural elite from the country at large, something we still see today. Had Perlstein paid more attention to his own excellent chapter on the 1974 fight over science textbooks in Charleston, West Virginia, not to gawk at how this could happen in the same country where post- Watergate soul searching was taking place, but to wonder if those obsessing over the Exorcist were missing the point, he might have discovered this. As it is, he struggles to find the answer to a question that never needed to be asked.

I should note that I found the book enjoyable enough while driving or at the gym. There are very few works on the period, and the events Perlstein chronicles are interesting. The best bits are the most straightforwardly narrative, especially the coverage of the 1976 primaries and the Republican convention. Nixonland, however, tried to say something. The Invisible Bridge searches for a message, but never finds one. One might consider the timing of release. Nixonland was released in an effort to explain the 2004 election. The Invisible Bridge, while written before Donald Trump’s victory, cannot escape comparisons with it. Liberals witnessed November 2004 and were horrified. Horrified because they understood it. Almost nine months on, most liberals still do not understand what happened in November 2016, and this confusion is manifest Perlstein’s latest work. He knows something happened, that it was critically important, but he cannot grasp, not least because he does not wish to grasp, what it was. That makes the work timely in its own way.