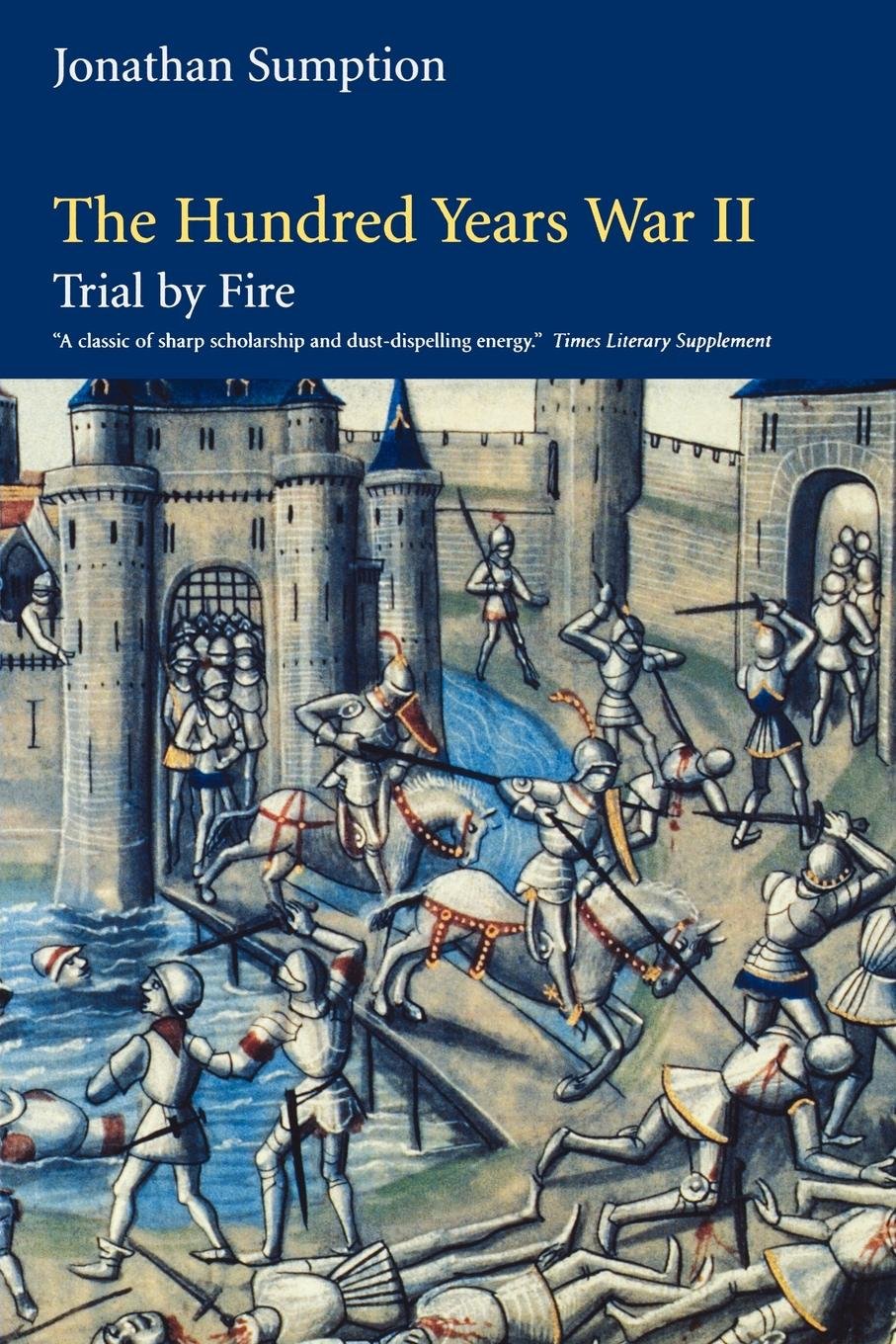 Those few individuals concerned about spoilers for a 600-page historic text should avoid the introduction to the second volume of Jonathan Sumption’s history of the Hundred Years war. If the first volume, Trial by Battle, focused on the struggles early modern states like England and France faced financing wars, and the strength of forces working to tear them apart, the second, Trial by Fire focuses on the inverse. Why despite an almost unprecedented series of disasters, military defeat, the capture of a King, urban revolution, bankruptcy, the descent of much of the country into anarchy at hands of armed bans of mercenaries(Routiers) and Civil War, France did not break up during the 1350s and 60s.  Nor was England, despite crushing battlefield victories at Crecy and Poiters, the capture of two enemy kings(of both France and Scotland), and a military superiority that allowed English armies to crisscross France at will able to enforce a peace that secured any long-term political or economic gains. Not only was Edward III never able to achieve even a pretense of making good his claim on the French crown even with the physical possession of his rival, but the Treaty of Bretigny, by which England received a greatly enlarged Aquitaine in full sovereignty, proved a dead letter in under a decade. Its unraveling was partially triggered by yet another triumphal English military campaign, an intervention in the Spanish kingdom of Castile which ended in another battlefield victory at Najara which was undone in less than two years.

Why was the French state so sturdy that even without leadership, order, or defenders it proved impossible to partition or defeat no matter how many successes were won by English forces on and off the battlefield? Contrary to legend it was not a particularly longstanding entity. Large swaths had been acquired in recent centuries. Normandy, Anjou, and Maine had been ruled from England as recently as 1205, the County of Toulouse was only integrated into the crown in 1272 after the brutal Albigensian crusades, the English repeatedly managed to impose their candidates on the Duchy of Brittany during the Hundred Years War, and Flanders had revolted every decade in the early fourteenth century. Even the Valois dynasty was new, having succeeded in 1328 in a manner which bypassed the claims of the legitimate daughter of one King(whose son, the King of Navarre would go on to cause no end of trouble in this volume) and the grandson of another(Edward III of England). The Valois monarchy had presided over almost uninterrupted disaster and defeat, including the capture of King John in 1356, while his son was chased from his own capital by the King of Navarre. England had deposed one monarch for incompetence in 1328, and would depose a second before the end of the century. A change of dynasty or monarch does not seem to have been seriously considered by anyone except the King of Navarre, even Edward using his claim more to protect potential French allies from charges of rebellion than as an achievable goal.

Ultimately, the answer lies at least in part on how Edward of England chose to overcome the inferiorities of resources in waging war that so bedeviled English conflicts against France for the preceding half-century. With less than a fourth of the population, and at best half the tax revenue(due to a more efficient single national parliament), England could not win a normal war of attrition involving constant annual campaigns of sieges on the peripheries of Gascony and Scotland. France could field more armies for longer periods of time. It could also raise larger field armies, yet here England partially made up for this by tactical superiority. Yet in order for that tactical superiority to matter more than France’s greater resources, the English had to bring the French to battle. By contrast, by avoiding major battles and focusing on sieges the French could whittle down English possessions,  leaving the English the choice either of dispersing their forces, or campaigning ineffectively. Furthermore, the time and logistics involved in shipping armies across the channel meant the English had far less time to campaign then the French.

Edward overcame this with a political and economic strategy. The economic portion was to take the war to France in a destructive way, inflicting as much damage as he could on the country. The objective was not economic damage to the French state, for which the damage was too light, but to its legitimacy. The French King could survive the loss of his subjects’ property, but their loyalty could not. Who would pay taxes or answer the calls of a King who would not answer their pleas for help? By targeting major interests Edward undermined their loyalty to the center.

This eventually forced the French King Philip and later his son John to “do something” so as to show they were fulfilling their duties even if they were not successful. Yet the defeat at Crecy and subsequent capture of Calais served a purpose. By showing that French army could not defeat the English in the field, it then ensured that a French army could not risk exposing itself to battle. The English, still lacking the money to pay soldiers themselves, issued thousands of contracts to soldiers of fortune giving them the right to govern castles they could occupy, to extract taxes(or protection money) from the local countryside, and to ransom any prisoners they took. This early exercise in free market capitalism was a spectacular success in collapsing the French state. As the Routier bands spread throughout France, suddenly the resources of the French nation were funding an army devastating it rather than its own forces. The Routiers steadily expanded in turn raising more money.

Yet the English success came from undermining the control of the French government over France, not extending its own control. On paper most of the Routier bands owed allegiance to Edward III, and his banner flew over perhaps a third or more of the Kingdom. In practice, they took only orders they chose to follow, regularly refused to hand over prisoners, did not cooperate with campaigns, and paid tribute more to secure the franchising rights to claim to be lawful combatants, useful if they ever fell into the hands of French royal forces, than as taxation. As such, even when Edward managed to capture the French King John, he had trouble extracting a peace treaty from him. Quite simply, the problem with having deprived John of control of much of his Kingdom was that Edward was demanding John cede territory which he did not in fact have possession.

Nor could the signature of John, imprisoned in London, be used to enforce compliance from French officials in France. Some might claim he was being coerced, but that served as convenient fiction for French officials and nobles to simply ignore a King who was not performing his duty. The French King was gone, but France still functioned.

Ultimately, the price Edward paid for the Treaty of Bretigny was the position he had achieved in France which had allowed him to extract the treaty in the first place. The French elite were not willing to pay to free their King, but were to eliminate the Routiers, and Edward agreed. Yet the Treaty, while nominally giving England everything, a massively increased Aquitaine, a major cash indemnity, Calais, it in fact gave the English almost nothing. They already held Calais, never collected the cash, and Aquitaine, as was most conquered territory was held by opportunistic nobles and Routiers, not English troops. Absent the Routiers, who Edward agreed to repudiate and who soon found greener pastures in Spain, the English did not have the troops to occupy or govern their new possessions, much less protect them. What remained for a decade was a fiction of sovereignty.

By contrast the French gained time. The Dauphin Charles, first as regent, then as Charles V, freed from fear of defeat at the hands of an English field army, focused on eliminating the Routiers with a carrot and stick. On the one hand he campaigned aggressively, executing those he captured. On the other he used the money which should have gone to the indemnity and spent it hiring them to fight for a Pro-French rebel in Castile. That not only took them out of France, but forced England to intervene to prevent the overthrow of their ally, trapping them on the wrong side of the same sort of war they had been successfully fighting. The French success in Castile left an England which had never had enough troops, and where Parliament refused to fund an army in peacetime after victory facing a recovered France and a hostile Castile. The stage was set for the collapse of all of England’s gains in 1369-73. While efforts would be made to repeat earlier successes, the French avoided battle, and former Routiers were either too comfortable enjoying their riches as legitimate landlords in England and France, enjoying greener pastures in Italy or Spain, or simply too old.

Sumption covers all of this. Again there is a focus on the importance of legal institutions in an age when diplomacy, religion, and politics all were judicial rather than political processes. In particular, he focuses no just on the military side, but also on the urban revolution in Paris, when Charles the Bad of Navarre attempted to pose as champion of the people, and force an elected council on the future Charles V, eventually driving him from the city for some time. Ultimately, however, Sumption highlights an important difference that would define the future development of England and France. In England, the Parliament was a tool for strengthening the state. By contrast, in France, the Royal government was supposed to function independently. Elected assemblies or councils, especially at the municipal level, only entered the picture in times of chaos, and this association of representative institutions with chaos, foreign invasion and weakness, a pattern to repeated during the Wars of Religion and the Fronde, would color the French right through the Vichy era.

Sumption is an excellent writer and while detailed he tries to appeal to a wider audience, often falling back on irony and humorous asides. The prose is quick, entertaining, and often comes off almost like a novel, albeit one with a somewhat bemused narrator. Obviously it is hard to recommend starting here before reading the first volume, and I felt both Trial by Battle, and the third volume, Trial by Fire, have a clearer theme being more focused on English rather than French domestic development. As such, this volume feels almost experimental. But it is still one of the best of its kind, if its kind is your kind of thing.