Reformasi: The Struggle for Power in Post-Soeharto Indonesia 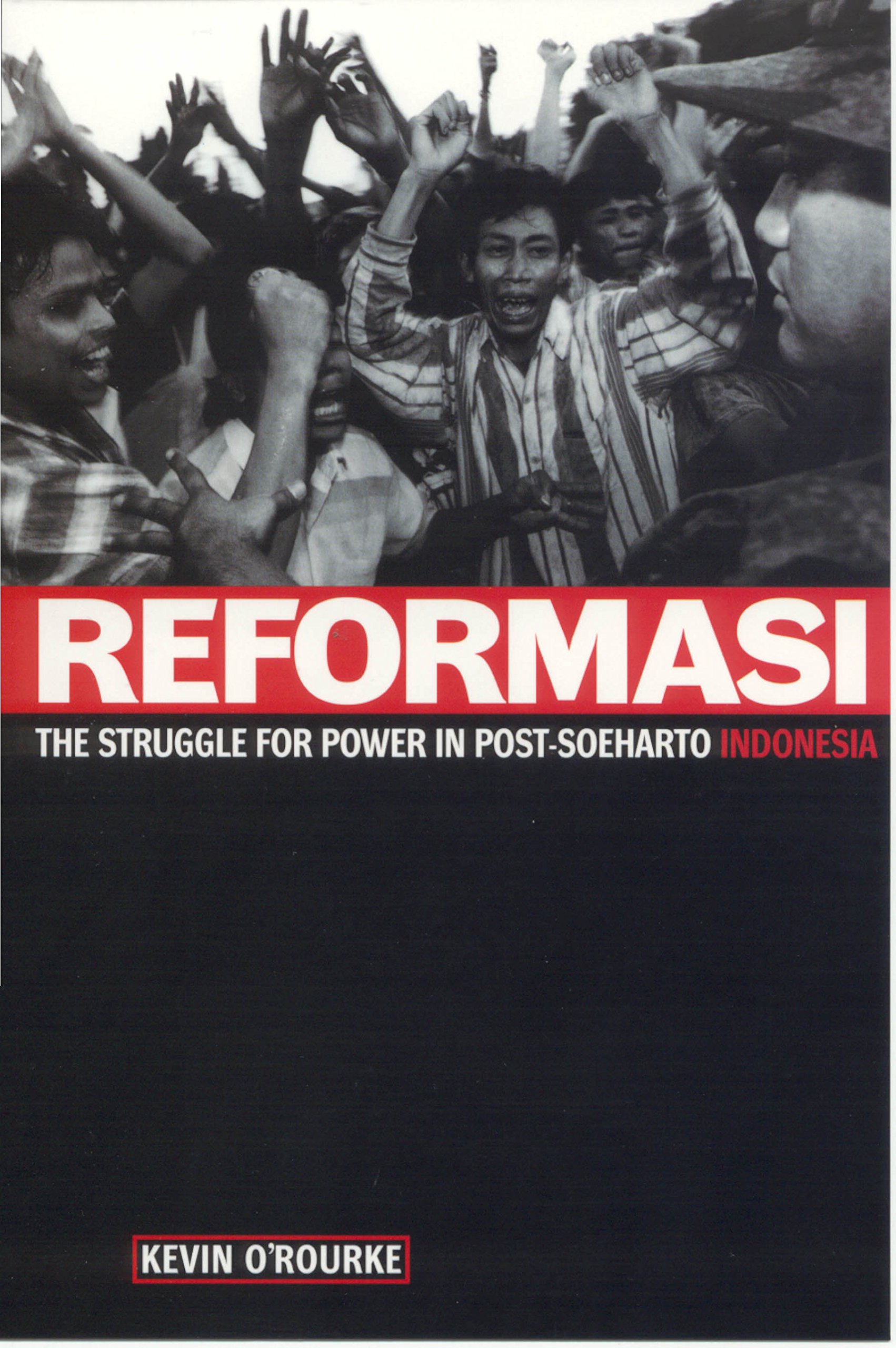 In early 1997, Indonesia held general elections, the sixth under the “New Order” regime instituted by General Suharto after he took power from Indonesia’s first president, Sukarno, in the aftermath of the murder of six of the nation’s leading military commanders with Sukarno's apparent complicity. While Suharto allowed multi-party elections, the entire playing field was rigged in favor of his “party” Golkar, which had extensive access to state resources and links to the military. Golkar defined itself not as a “party”, but rather as a “functional group” representing corporate interests.

Opposition parties existed in the form of the tame, ostensibly secular, Indonesian Democratic Party, and the mildly Islamic United Development Party. But neither made much headway in bringing Golkar below two-thirds of the vote, partially because of the skewed playing field, but also because Suharto remained paranoid about opposition even from within the system. He pushed his mentor, former Defense Minister Nasution out of politics in the 1970s, and changed Vice Presidents regularly. Whenever the opposition showed signs of life, as the United Development Party did in the 1980s, and the Indonesian Democratic Party in the 1992 elections, he moved quickly to snuff it out. The latter situation had proved unusually troublesome. After an energetic campaign, in which the IDP went from 10% to 15% of the vote, Suharto arranged for its reformist chair, Surjani, to be forced out in favor of the inexperienced daughter of his erstwhile predecessor, Megawati Sukarnoputri. When this turned out to be a blunder, in 1996 he moved to reverse the decision, reinstalling Surjani and having the army storm the party headquarters when students gathered to resist the coup. While embarrassing, the moved seemed successful, albeit at the cost of destroying the party. In 1997, the Indonesian Democratic Party fell to only 3% of the vote, while opposition supporters rallied behind the UDP which won 23%.

Yet this conflict appeared only as background noise to most observers, for whom Suharto’s reign had seen unprecedented economic growth. Indonesia, having suffered instability and poverty under Sukarno, had ostensibly seen Suharto bring prosperity and order. Political manipulation seemed a small price to pay to maintain the latter. Yet both would collapse within a year.

The 1997 Asian Financial Crisis is controversial, acting as a proxy battlefield for different political and economic theories. For some, it is proof of the drawbacks of state capitalist development. For others, it illustrates the blindness or greed of the Western-dominated IMF, or the foolishness of its austerity based orthodoxy. The hand of more specific conspiratorial actors was also seen, with George Soros making one of his earlier appearance as international villain of mystery. Mahathir Mohamad, now once again Prime Minister of Malaysia made much of his refusal to take IMF advice and his nation’s success.

Kevin O’Rourke, who worked as a bank analyst and equity research director in Jakarta does not pretend to have the answers to the Asian Financial Crisis as a whole, or global economic theory. What he does understand, and provide in his book, is an understanding of Indonesia’s economic crisis in 1997, and critically that it was political as much as it was economic. Whatever the merits of state capitalist systems in abstract, the way the system worked in Indonesia meant that politics drove economic planning, economic pressures drove political decision making which then subordinated economic interests to the political ones of the actors.

In the case of Indonesia, this came in the form of the heavily cronyist form of economic investment, in which close relatives of the President and interests close the military received mass preference in resource allocation. While this inefficiency was not enough to eliminate growth in good times, it meant that any successful economic actor had by the mid-1990s developed political or factional ties within the elite which they could call upon to defend their interests in a crisis.

One began to develop in early 1997 as Thailand and other Asian markets began suffering currency declines. Indonesia actually was in decent shape, but technocrats urged reigning in debt. Yet their efforts were repeatedly overridden by economic actors with close ties to the Presidential family. In fact, fear of austerity actually worsened if not created the currency crisis by causing companies to seek access to foreign currency reserves before they were cut off. When the IMF got Suharto to appoint technocratic ministers they found their decisions, and those of the central bank, reversed by phone calls. The impact of austerity was to shift spending away from efficient economic actors and towards the least efficient but most connected.

These failures were exacerbated by a struggle for the presidential succession.  Suharto was 76 years old, and had no clear heir. This was significant. If Suharto had been younger, and there had been a prospect of him remaining in power longer, then his support and desire for austerity to be carried out by his technocratic appointees could have empowered them to resist the pressure from factions. But as Suharto was likely to be gone no matter what, and the farcical nature of Indonesian democracy meant future career prospects depended on the favor of the next President, no Minister or other official could afford to alienate potential candidates. In particular, Suharto’s daughters Tutut and Titek, and son Tommy fought a Game of Throne’s esque struggle for succession through the state economic institutions. Nothing could be done without the support of patronage of one, but that identified a minister or official as a partisan to other siblings and factions, making inaction the wisest course.

At the same time this political struggle was undermining the effectiveness of economic policy, and turning a challenge into a catastrophe, the same political struggles within the regime’s pillar of support, the army, also undermined it. Suharto had deliberately divided power within it to maximize rivalries and preempt challenges, but without his direct involvement, leading commanders saw the chaos, and human rights abuses involved in crackdowns, as a battlefield on which to fight internal political conflicts. They went so far as to engage in deliberate atrocities themselves to embarrass rivals only to then express outrage at the crimes committed outside their commands.

Paralysed economically and politically, the regime fell over. It was not overthrown. Suharto’s failure to resolve the succession created a situation in which no governmental institution could function until that question was settled and that question could not be settled until he departed. He was eventually forced out by an alliance between the governing elites and army.

Having disposed of Suharto, the governing elite and military promptly spent the next two years before Indonesia’s post-Suharto Presidential election plotting against each other, again ignoring the opposition except for ad hoc alliances. When President Habibie, Suharto’s Vice President lost a vote of no confidence by a narrow margin, it was widely believed to be because the military members of the Assembly abstained.

It would be a happy story to say that Habibie’s fall paved the way for the removal of the elite of the Suharto era but it did not. It invited opposition members to join the game. While new President Wahid tried to rein in the military, they joined with his rival Megawati Sukarnoputri to remove him. She herself lost reelection to one of the leading commanders in 1997, and the opposition candidate in this year’s Presidential election is Suharto’s former son-in-law.

The latter manoeuvring, while fascinating, is likely of less interest to the reader than the earlier parts of the book dealing with the development of the financial crisis. I found these not only to be clear, but exhilarating at parts. While I knew what was going to happen in the end, they were written like a thriller, adding a tragicomic touch to the inevitability. Most importantly, and something I found deeply interesting given how superficial discussion is of economic systems, especially in the developing world, or of institutions like the World Bank and IMF, or concepts like “Neo-Liberalism” I felt it was a clear corrective to some of the praise we are seeing of State Capitalism.

While State Capitalism can produce benefits, those are often negated when rather than the State directing the Capitalists, the State Capitalists take over the State. While one can ascribe what happened in Indonesia to the weakness of the system, and Suharto’s age, and do so with some fairness, it seems more accurate to look at Singapore under the Lee family or Malaysia under Mahathir as exceptions. Malaysia rapidly descended into many of the same issues Indonesia had under Mahathir’s successors, and Thailand and South Korea, both seen as success stories, had deep political problems linked to the strength of major economic actors. State capitalism has produced corporations that can compete internationally but not competition or freedom within the local economy, and fixated domestic politics around struggles for control of those actors. State Capitalism seems to very often corrupt the state.

I am not sure I would recommend everyone read this entire book. The intricate narrative of Indonesian political manoeuvring following Suharto’s fall is an acquired taste. I enjoyed it, but many might not care. What I would, however, recommend are the first few chapters leading up to Suharto’s fall. They are probably the best portrayal of how corruption actually corrodes states, and why the values we too often question in the rush to praise some sort of “Chinese mode”, lack of an independent judiciary, actual viable opposition parties to keep governments accountable, professionalised military outside of civilian control – are vital to long-term economic success.

I give this work a guarded recommendation. It is probably one of the best works on this topic, but the topic is perhaps too specialised in parts for the average reader.