When did Obama abandon the Syrian opposition? And why did he never let his UN Ambassador know it? 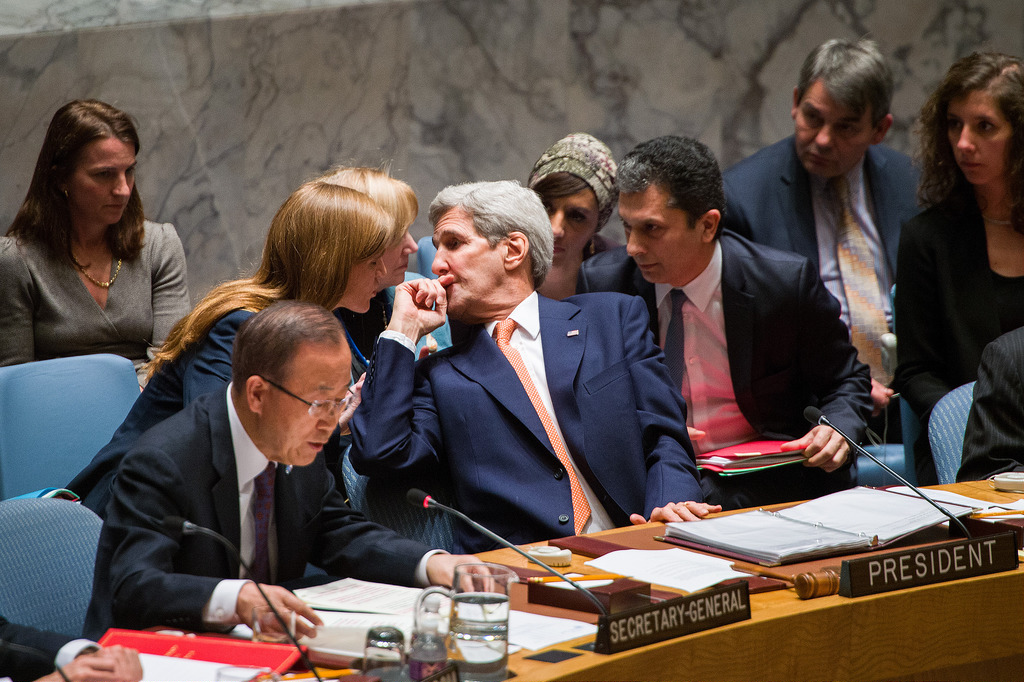 Ben Rhodes, US Deputy National Security Adviser for Communications has an interesting interview with Politico. Interesting, I say, because it is explicitly focused on framing the Administration's accomplishments. Of particular note is the section dealing with Syria, where Rhodes, who according to reports championed abandoning Hosni Mubarak against a skeptical Hillary Clinton, admits to changing his mind on Syria, and lauds Obama Administration's decision not to get involved on the ground in Syria.

I went through an evolution on Syria. I came into this job shaped by the post-Rwanda view of liberal interventionism3—suspicious of some amount of U.S. military intervention, but also seized with the necessity of acting in certain situations. I was a vocal advocate of [going into] Libya,4 and in the early days of the Syrian conflict, I was an advocate for military action in Syria. And I believe that I was wrong about that. Everything that I have learned about watching that conflict unfold suggests to me that the president’s refusal to get into a military conflict with the Assad regime was actually one of his best decisions. And I don’t expect that view to be the popular view for a long time, if ever. But he tested every possible option, and at no time was there a viable military option to make things better in Syria.

This is an enormous concession. Rhodes is in effect admitting that his worldview, and that of the Obama Administration when it entered office was wrong. Not only is this an unusual concession from a senior policy maker - policy makers establish their "brand" by finding a viewpoint or position and advocating to an irrational and often catastrophic extreme - but it is illustrative of the wider context of the political change that has occurred between 2008 and 2016. Voters are not merely suffering from temporary insanity. Rather, actual events and developments in that period have driven someone as well-informed and idealistic as Rhodes to question what was academic and elite consensus a decade ago. It is worth paying attention to Rhodes' reasons, as they sound very similar to what I was saying three years ago as were many realist critics of the Obama Administration. Now we all appear to be realists.

Rhodes: It’s difficult. And again, I’ve thought a lot about the Balkans because that is the one example of military intervention that, while complicated, succeeded. But that was in the middle of Europe. You had NATO and the investment of Europeans in seeing it through. We notified Russia as we were bombing. Syria could not be more different. And what I found in general in the Middle East is you aren’t going to make people happy. We cannot resolve the issues internal to these countries. What I feel bad about is the fact that they’re just ordinary people who are caught in the middle of this.

What’s strange is, I met with the Syrian opposition, and often they would argue that we should work with al-Nusra, who we know is Al Qaeda. And I’m sympathetic if you’re in a neighborhood where al-Nusra is defending you against Assad. You want us to work with them. But let’s say a U.S. president does that, and then al-Nusra is using weapons that we gave them against us. That’s something you never recover from, right?

There have always been two ways to view the Syrian conflict. From a global humanist perspective, which views the conflict from the standpoint of a humanitarian and legal tragedy, and from that of crude self-interest. The former has led to outright advocacy for the overthrow of Assad. Not only is he an oppressive dictator, but there are international legal norms to uphold, or so goes this view. Assad used, or may have used, chemical weapons against his opponents, and his forces have shelled civilian areas. Best exemplified by Samantha Power's outburst at the UN asking the Russian representative whether he had "any sense of shame" and Senator Marco Rubio's pointed question to Secretary of State nominee Rex Tillarson as to whether he would "describe Assad as a war criminal" this view assumes that if Assad is a war criminal we should ipso facto find his continuance in office unacceptable.There is no comparative here, no question as to whether his opposition might be worse, or done worse things, quite simply Assad has done X and therefore must be removed.

Even the advocates recognize the weakness in this line of argument, namely the lack of any sort of alternative. This is one reason for the continued insistence over the last five years in the existence of formidable "moderate rebels" and a clear distinction between them and "extremists" whether they be ISIS or Al Nusra, who we are told, represent only a tiny fringe. This line has been maintained by US officials, even as rebel alliances fracture, and ISIS became more prominent. It was a driving force of criticism of Russian intervention that Russian forces were attacking not ISIS but "moderate, pro-Western, rebels". As such, Rhodes' concession is massive. It concedes that even if they exist, the "moderate rebels" are sufficiently irrelevant that a rebel victory, and by implication the overthrow of Assad is not desirable to the United States. When it is remembered that America's UN Ambassador demanded the removal of Assad in the last month and said that history would remember those that stood silently by, she was demanding something that the closest adviser to her President had decided was undesirable and not a goal of the United States.

How recent was Rhodes' conversion? From the tone of the interview, quite some time ago. Was he isolated in the Administration? There is no implication of that in the interview. On the contrary, he sells himself as the adviser who knew the President's mind, and his role as placing Obama's legacy in foreign affairs into historical context. That suggests the President agrees with him. This in turn, implies something scarier. Either the American Ambassador to the United Nations is being allowed to carry out a policy totally at odds of that of the Administration, or her actions on Syria were driven not by an actual desire to see Assad overthrown, but rather by an effort to punish Russia for its "election hacking" or was this an effort to raise the cost of the Trump administration adopting a policy u-turn the Obama team had already decided was necessary?

This is not to condemn the conversion. As a strong realist I think Assad is and has been the least bad option. Yes he is backed by Tehran and Moscow, but even from an Israeli perspective, a Syria that is Shia and weak is preferable to one that is Sunni and strong. And any Alawite/Shia regime in Damascus will always be weak, because with its base making up only 15-20% of the population, it will always have to fear revolts. As such, it will not be able to afford to risk the army it needs to protect itself from its own people in a likely futile conflict with Israel. By contrast, an Assad defeat would bring with it the cleansing not just of the Alawite population of Syria, but likely threaten the position of the Shia of Lebanon as well. And with that population stuck in the south, the only two directions to go will be into the sea or into Israel, something Israel really does not want. The survival of the Assad regime is hence even in Israel's interests. By contrast, with Turkey increasingly losing interest in removing Assad, it is unclear who exactly will be offended by abandoning the rebels other than some elite opinion in the Gulf, and some residual establishment segments in the West.

Rhodes seems to have thought this through, and by all accounts Obama is a deep thinker as well. But this entire matter, and the way it has been handled during the transition also represent a lot of problems with the way in which Obama Administration policies were conducted. Somewhere between conception and implementation they fell victim to a spirit of spite and pettiness with the result that what ended up occurring bore little resemblance to what was decided. Those outside the inner circle, which apparently now includes the Secretary of State and UN Ambassador are left to follow an outdated policy on autopilot, only to learn that themselves when they are casually disavowed in an interview. This is far from the first time it happened, and given Trump's inauguration it will probably be the last, but any historical assessment has to look not just at what Obama thought but how words translated into actions. Or on Syria, didn't.