The Republican Nomination in October 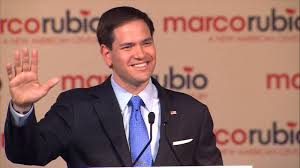 In early July I was attending a debate competition when asked by several friends who I thought would be the Republican nominee. At the time I had been quite outspoken in my belief that regardless of media excitement, Wisconsin Governor Scott Walker was going nowhere. I therefore responded without the slightest hesitation that Marco Rubio would be the nominee. Today, with Donald Trump leading the polls, Carly Fiorina seemingly surging, Scott Walker out of the Presidential race, and Democrats seemingly exultant over dysfunction in the Republican primary, I stand by that prediction. All the signs point to Marco Rubio being the nominee.

In establishing this position, I follow a simple calculus. Ultimately, analysis that examine voter behavior based upon ideological viewpoints, and try and divide the Republican electorate into Tea Party/Establishment wings, or Conservative/Moderate spectrums, miss the ultimate strategic nature not just of American voters, but of almost all voters who identify clearly with a political party. For them, the gulf that separates them from each other, while often prominent and divisive, is always dwarfed by that which separates them from the opposition. This has only become truer as the parties have polarized, and power has moved in all democracies, but particularly in the United States, from the legislative to executive branches. Today, almost every major issue, immigration, same-sex marriage, military policy, foreign relations, even regulation, is decided solely by the identity of the President. As Obama has shown with his unilateral suspension of immigration laws, the executive can selectively enforce laws, policies and regulations, and what Obama used to halt deportations can as easily be used by a future Republican President to end preference for unionized contractors in government contracts, gut Obamacare without recourse to legislation, and to allow environmental regulations to die of benign neglect. The publicity with which a Trump or Bush implements moves might be different, but ultimately the President does little themselves. What matters is who they appoint to the tens of thousands of federal positions, and for these, no individual politician has a long enough personal reach to have an appointee list that would be at all distinct beyond the top 5-10%.

Voters are aware of this. Hence the real question is whether or not there will be a Republican or Democratic President. So how to explain the success of extreme candidates in the polls, and the tendency to fight ideological battles? Well because there are ultimately two circumstances in which primaries are held. The first is one in which the party believes the general election can be won. The latter is one in which they do not.

It is only in the latter case where voters feel free to voice internal differences. Without a doubt, the Democratic party in 1972 threw away the Presidential election by nominating George McGovern, and arguably the Labour party did the same thing in the UK just a month ago. But what needs to be grasped is that they did so in a context in which they doubted they could win anyway. In the event this doubt was couched in gambling terms; "if we are going to lose anyway, we might as well try and change the electorate." In McGovern's case this meant bringing in young voters, anti-war protestors, and minorities; the Jeremy Corbyn strategy is the same. But central to it is a belief that the party was unlikely to win with the alternatives. In this sense, Liz Kendall did not lose to Jeremy Corbyn despite being more electable; she lost because she failed to convince Labour voters she was at all likely to win an election in any case, so they decided it made no difference.

Such attitudes, however, have a history of changing on a dime. A solid example is the 2004 Democratic primary contest. The initial trajectory of that contest closely mirrored that of the Labour leadership election this year. Two years out the leading candidates were Al Gore's 2000 running mate, Joseph Lieberman, whose belief that the party had to move to the right and outspoken support for invading Iraq were presented as electoral assets. He was challenged by an assortment of less explicitly right-leaning, but still amorphously "New Democrat" and "Clintonian" candidates such as Senator John Kerry of Massachusetts, who ran on his war record, John Edwards of North Carolina, who ran on his accent and appearance, and Senator Bob Graham of Florida who ran on his time heading the Senate Intelligence Committee.  While they debated the ways in which Democrats had to win over swing voters by voting to invade Iraq, and supporting the Bush Administration, the grassroots rebelled. Concluding that if Iraq was popular, Bush was likely to be reelected anyway, and Democratic efforts to make a war-time election about social security almost certain to be futile, they rallied to Vermont Governor Howard Dean, who gained grassroots momentum with his opposition to Iraq. By the end of the year he was the frontrunner, his title cemented with an endorsement by Al Gore. Had the Iowa Caucuses been held in November 2003, the results would have mirrored those of the 2015 Labour leadership contest.

But that wasn't when they were held. The Democratic primary was late enough that the gloss of victory began to fall off Iraq. Stories of incompetence, overconfidence, and outright corruption began to filter out, and Bush's poll ratings fell from above 70% to around 50% over the course of six months. Democrats began to suddenly believe that Bush might actually be able to lose. At that point, the alternative strategy of the centrists, represented best perhaps by John Kerry, of turning the election into a referendum on competence to manage a war that was ongoing rather than on the decision to go to war, suddenly became a much more attractive bet than ranting about a decision that would be nearly two years old by election day.

The result was that all of those polls from 2003 became meaningless. Howard Dean won exactly one state, his home of Vermont. Kerry not only won, but won easily, winning 47 states. Once Democratic voters decided on the centrist establishment strategy, their question became who was the best of the establishment candidates to carry it out, and in that competition, Kerry beat Edwards and Wesley Clark. It is interesting to wonder might have happened with the UK Labour Party leadership contest if rather than quitting on election night, Ed Miliband had remained on until next year. Had he allowed tempers to cool, and most importantly, the Conservative party's poll ratings to dip, the dynamics of the election might have played out very differently. Just as the choice between Howard Dean and his foes looked very different when Bush's approval ratings were at 67% and 49%, so too it is hard to see Corbyn doing quite so well against his foes had Labour led rather than trailed the Tories by eight points.

The same dynamics apply to the Republican primary, and that matters because suddenly Hillary Clinton's leads have begun to vanish. That means that rather than a choice between a candidate who trails Hillary by 13 and one who trails by 8, the choice is now between ones who lead by 2 and others who trail by 7. This transforms the decision-making processes of primary voters. It is an error to assume that a stated intention of voting for Donald Trump, or Carly Fiorina, or Jeb Bush implies any particular affection for one of those candidates. Some voters may have preferences, but for the most part, those intentions are rather statements for or against particular strategies for approaching the general election, based upon a reading of Hillary Clinton's perceived strength and the national environment. Ultimately, Republican voters will either decide that the election is winnable or not, and if they decide on the former, which in my view is almost certain given Hillary Clinton's continued difficulties, then the next question becomes which strategy to adopt. From a strategic perspective there is really only one option here.

At that point the choice becomes who is best able to carry it out. And here Rubio wins hands down. He has the same home-state as Jeb Bush, a greater appeal to the Hispanic community. He is younger, and therefore a fresh face, whereas Bush has the legacy of his brother. He has lower negatives. He is less apt to make gaffes. And most importantly, while Bush generally trails Hillary, sometimes doing almost as badly as Trump, Rubio increasingly leads her.

Compared with those strengths, Bush's are transitory. Having more money is a temporary circumstance, and did little for Howard Dean in 2004. Being more experienced is of little value if you are running an objectively worse campaign, turning in a greater number of gaffes, and worse debate performances. Name recognition is far from an advantage.

That of course leaves Fiorina and Kasich. The former has run for office once and lost by 11 points. She has a questionable business record, and no real campaign apparatus. Whatever her debate performance, many will have qualms about sending her into a general election. As for Kasich, he is a viable second choice, but he is to the left of Bush and Rubio, without that being clearly required to win the general election. He lacks Rubio's youth and Hispanic background. In effect he would be acceptable without Rubio in the race, but Rubio is more appealing ideologically to Republican voters without being any weaker, and arguably being stronger in a general election.

I would not be shocked in fact if Rubio ended up winning relatively easily. It is easy to see him receiving a "novelty" bounce from an overpeformence in Iowa, riding that to a win in New Hampshire, and then blazing through a divided field in South Carolina with 25% to finish off Bush, and the nomination in Florida. That is not a foregone conclusion. Gingrich and Santorum bedeviled Romney for months. But McCain and Kerry both all but secured the nomination with the Iowa results, and both were in third place there at this point in those campaigns.

As for Democrats, it would be highly unwise for the party to count on Republican divisions aiding them this fall. Without a doubt they would benefit from those if they develop, and a long battle between Trump and his foes would be a boon. But the historical precedents suggest that is unlikely to materialize, and they should look to their own frontrunner who has been running a dreadful campaign and is taking on water from all directions. Because right now it does not appear that they have a strategy to win the general election against a real opponent.