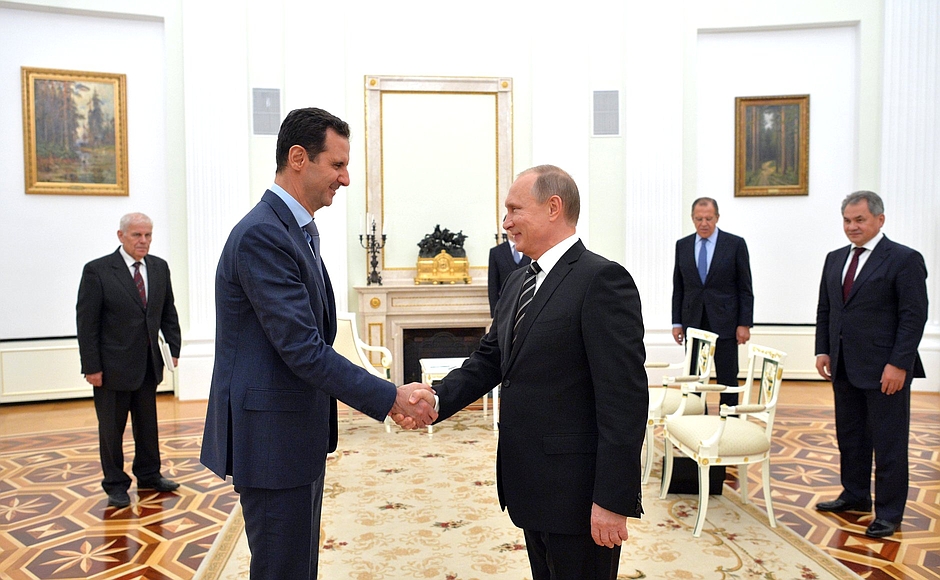 There is something vaguely unsettling about discussion of the Syrian conflict by Western leaders. It is not their lack of concern; they are very concerned about what is going on in Syria, and European leaders in particular have reasons for those worries. Germany is expecting 1.5 million of them this year.

Ultimately, however, there is nevertheless something hollow about Anglo-American outrage over Russia's intervention in Syria. Beyond the hyperbole about a potential World War III, or about post-Ukraine Russian expansionism, the real anger almost betrays jealously. For Russia has the luxury of something in Syria which Washington and London lack, and have lacked since 2013, namely a goal, and therefore the ability to develop a strategy to pursue it.

Western leaders have been befuddled by Syria for quite some time. Caught off guard by the collapse of Qaddafi, Barack Obama was desperate not to be left behind by events a second time. The result was that in 2011 and 2012, the United States jumped the gun. While in Libya it waited far too long to recognize the opposition – had they done so after the initial fall of Benghazi and the first march on Tripoli they may well have avoided a lot of fragmentation – the United States and its allies jumped the gun in Syria. Obama declared on August 18th, 2011 that“Assad must step down. This would have been all fine and good if Assad had fallen on September 18th, 2011, or had that been a serious enough prospect for Assad to decide that his vacation home in Dubai could not wait, but that was not the case. And the results were dangerous. The United States found itself appearing impotent.

Worse than appearing impotent however was that the West actually made itself impotent. By his statement, Obama forfeited all influence in Syria. The definiteness of his stand precluded any move to include Bashir Assad and his government in any settlement or even negotiations, meaning that any real compromise was impossible. Furthermore, by publicly precluding that possibility, it also precluded the possibility of the United States threatening to pursue it as a method of exerting leverage on the Syrian rebel groups, or for moderates within those groups to exert pressure on radical rivals. Had a settlement with Damascus, perhaps one in which Assad declined to run for reelection in 2012, been on the table, moderate secular rebels could always have threatened to reach such a deal if ISIS or other extremists gained too much influence. The United States in turn could have done the same. But Obama could never walk back his words, nor could America's allies and America was therefore trapped.

Trapped, that is, with an impossible policy. The United States was committed to Assad's overthrow, but also to preventing the leading rebels from taking power. As this was an absurd strategy that was impossible to pursue at once, the West decided to pursue it in linear order. They would overthrow Assad, and then presumably deal with the rebels. Hence Obama, Cameron, along with French President Francois Hollande became obsessed with bombing Syria, and with the use of chemical weapons in the summer of 2013, they though they had found their chance. By that time, however, cooler heads had begun to prevail. While it is was clear why this was a rational strategy for Barack Obama and David Cameron who had managed to trap themselves into a rhetorical dead end, others were less committed and it was unclear to the UK Parliament or the US Congress why the West should back the overthrow of Assad when it was unclear if he would replaced by people who were any better. They also saw that intervention would require an open-ended commitment, as a victory by the rebels as they currently existed and under their current balance of power could never be acceptable to the West.

Hence the political winds had already made intervention unlikely when Putin stepped in. His “deal” was an act of brilliance. It was a total and complete defeat for Barack Obama and David Cameron. While it nominally dealt with chemical weapons, its real impact was that it completely defeated their real goal, which was to break the Syrian logjam by bombing Assad into submission, thereby freeing them from their 2011 commitment. By locking the West out of military intervention it froze their policy. They could not walk back their actions against Assad, not simply for reasons of pride, but because some of them such as the seizure of Syrian government assets by the Obama Administration in 2011 qualified as violations of international law, only justifiable on the basis that the Assad regime was no longer the "legal government" of Syria. As such, to avoid penalties, they had to pretend that the legal government was some collection of rebels who were not ISIS, resulting in a revolving door policy in which various "umbrella organizations" were recognized only to fall apart after months or even weeks due to infighting,

Putin may well have presumed that the rise of ISIS would finish the job. Suddenly it was not just Russia or Iran that favored Assad as the least bad option. So too did almost every regional state except for Turkey, including Israel. Yet this has failed to bring a change in Western policy. The response to Russian intervention was to express fears that the Russians were hitting the all but nonexistent non-Islamic “secular liberal” opposition in addition to ISIS, as if that group somehow mattered or had a shot at taking power if Assad were to fall.

There was something unreal about this outrage, and the fantasies being thrown around subsequently about providing additional training and weapons to the non-extremist rebels. The simple fact is that the West no longer has an endgame in Syria. The West is morally and politically committed to a “rebel victory” but fears the consequences of such an eventuality more than they fear Assad remaining in power. Yet that commitment prevents them from realizing that rationally an Assad win would have been in their best interests. An Assad defeat would bring about a long Civil War between ISIS and its foes, or bring ISIS to power, in either case leading to an even greater exodus of refugees to Europe. By contrast, the only outcome with a promise of real stability would have been an Assad victory. While that would have produced some political refugees, it is hard to imagine that if Assad had won in 2012, we would have 60% of the Syrian population having fled the country.

The irony is that the West is committed to continuing the war in Syria until Assad is overthrown, and Russia, by intervening, has reduced a small hope to a near impossibility. Hence, why Putin's actions are not a threat to the United States or Britain, they are a mortal threat to the policies of both countries. And the outrage is then understandable. But it is also understandable how states like Iraq nevertheless prefer a stable and secular Syria to indefinite civil war and anarchy, and hence why they are looking at a partnership with Russia.

One could hope that Washington and London might see these events as an excuse to dump their now dated policy, blaming Putin for the consequences and letting him take the regional heat. They don't really want Assad's fall, or at least its consequences, and haven't for almost 18 months. It is their honor instead of their interests at stake. But that honor matters a whole lot to Americans, and it seems to particularly matter to Barack Obama where Vladimir Putin is concerned. American policy has shown a tendency to become exceedingly petty where Russia is concerned(admittedly the same is true on the inverse), and it seems almost plausible Obama would prefer to pour arms into Syria, even at the cost of strengthening ISIS and increasing the refugee flow, if only to deny Putin a victory. That would be unfortunate. There was a time when Western intervention might have meant the difference between a rebel victory or defeat and secured power for non-extremists afterwards, but that time is long past. It is absurd to invest everything in fighting Russia when it is possible Russia is pursuing what our policy should be in any case. All things considered, before complaining about Syria, Washington and its allies need to finally have to reach the conclusions about Syria's future they have avoided for four years.