Despite Cease-Fire Failures, American Weapons are not a Solution 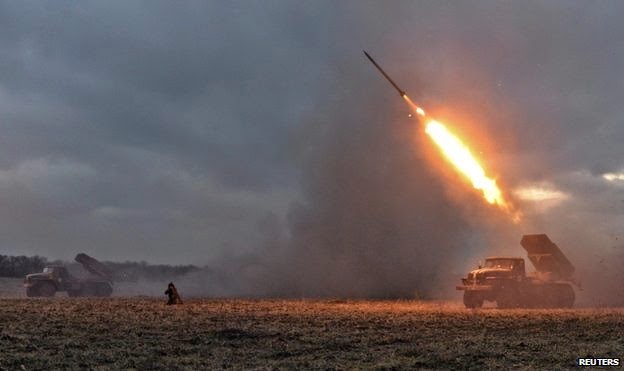 When news broke of a cease-fire agreement in Minsk last week I expressed skepticism over the prospects of its ability to last. Hence the failure of the agreement to actually stop the fighting in Eastern Ukraine has hardly come as a surprise to me. What has been somewhat surprising is exactly how quickly it unraveled, which is to say it never really went into effect.

Scheduled to begin at midnight on February 15th, no pretense was made of even attempting to implement it until the fall of the railway hub of  Debaltseve on the 18th, where surrounded Ukrainian forces were fighting a desperate battle against the clock. In fairness to the Russians and their proxies, Vladimir Putin evidently made this clear to Merkel and Hollande at Minsk, evidently telling them regarding the separatists that “of course, they expect [the Ukrainians] to lay down their arms and cease resistance”. That neither Merkel nor Hollande evidently felt that this announcement was significant enough to be included in the cease-fire conditions or communicated to the Ukrainians or wider EU until two days later is further evidence that EU leaders were more interested in the appearance of an agreement than the substance of one. Furthermore, the fact that the implementation of the cease-fire was delayed until after the fall of the city in question, more than 48hrs after the deadline, indicates that neither the separatists nor the government in Moscow are much concerned with longevity of the agreement.

It is pointless to blame the failure to enforce the agreement on Putin's inability to control the separatists; the rebel-held territories lack either the resources or manpower to sustain an extended conflict without Russian support, a point made clear in ironic fashion in a Guardian piece which chooses to interview a Russian doctor from city of Khabarovsk, 30 miles from the Chinese border, in order to get a perspective from the Separatist side regarding their intentions to reach Kharkov 300 miles deeper into Ukrainian-held territory. Unrest in the East may not be an entirely-Moscow conceived factor, but the ability of the Separatists to wage offensive operations and to receive volunteers most certainly is, hence why Moscow can chose to escalate and deescalate the conflict by loosening or tightening its border controls, even if it is not actively recruiting volunteers.

That said, it is unclear what exactly would be accomplished in the short-run by an American announcement of military aid to Kiev. Ironically, America is poorly placed to supply the Ukrainian military with the sorts of materials it needs in the short-term for a number of reasons.

The Ukrainian military is currently equipped with Soviet weaponry. Despite what experience in video-games may lead one to think, different weapons systems require different types of ammunition, and different vehicles requires different spare parts. As such, America cannot supply the Ukrainians with the sorts of things that they need in the immediate future - spare parts for their vehicles, ammunition for their weapons, weapons that will use the ammunition they have. The Czechs, Poles, or Germans, all of whom have stockpiles of Cold War-era Soviet hardware might be able to, but they have a lot more to fear from arming Ukrainians who are about to kill Russian soldiers. Oh, wait, I am sorry, "volunteers".Even if the United States did provide equipment, few in the Ukrainian army would be able to use it. With no experience with American or Western hardware, it is hard to imagine Ukrainian officers, much less conscripts with no knowledge of English or technical expertise to be able to utilize the sorts of hi-tech weapons that will be provided. In such a circumstance, tanks would at best be reduced to stationary artillery pieces, their range limited to direct line of site, much as hi-tech Soviet weapons were in the hands of the Iraqi army in the 1980s.

Both of the above problems mitigate both against the idea that American aid could be immediately effective, and far more importantly, that such aid could be effective without the provision of American military "advisers" to "instruct", or given the limitations under which the Ukrainian army is functioning, more likely operate, those weapons. In fact, we already see this on the other side, where Russian "volunteers" operate Russian heavy weaponry, weaponry that was often previously assigned to the same Russian Army units that those "volunteers" are currently on leave from.

These "volunteers" are present not because Putin wants to be directly involved in the Ukraine, or because he enjoys demonstrating his contempt for Western threats publicly. Rather their presence is a concession to the realization that warfare has changed in the past century, and random hoodlums are incapable of utilizing modern military equipment without months of training and direct instruction, something the US representative to NATO has pointed out.

What is true for Soviet hardware which has historically been infamous for its simplicity, and which should be familiar to at least many older Ukrainians from their days of compulsory military service would without a doubt be true of vastly more complicated American hardware which no one in the region has ever worked with before, and which lacks documentation in Russian. In effect, in order for it to be effective on the ground, a decision to provide American military hardware would have to also come accompanied by a decision to provide American personnel.

Even ignoring the simple question as to whether the United States has enough military personnel conversant in Russian and/or Ukrainian to be of much use(hence the likely need for them to operate the equipment themselves) their very presence would mark a significant escalation in the conflict. Given the intensity of the fighting, it is hard to imagine a situation in which American personnel are present for an extended period of time, and yet none are killed or captured. And the first moment one is, the United States has a hostage situation on its hands, during which Putin will gleefully insist that he has no control over his local proxies while nevertheless offering to "mediate" for the release of the American.

This is not to say that arming or training the Ukrainians is a bad long-term idea; on the contrary, it will be a necessity in order to prevent a repeat of current events. But it is not a solution to the present crisis, and it would greatly raise the political stakes for the United States without clearly improving the military prospects of the Ukrainian forces.