Can Republicans Score a Comeback in the Northeast? 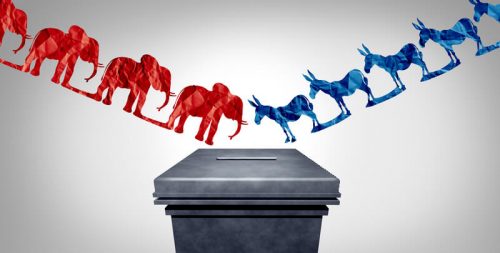 Before the 2016 election, left-leaning pundits often discussed the so-called “Blue Wall,” a collection of states totaling over 230 electoral votes which had voted Democratic in every Presidential election since 1988. On election night in 2016, Hillary Clinton captured Virginia, Colorado, and New Mexico, states which had eluded John Kerry, only to watch the Blue Wall crumble when Michigan, Pennsylvania, and Wisconsin went for Donald Trump. Nonetheless, even in 2016, Democratic hegemony on the Atlantic seaboard north of Virginia held. New England, New York, and New Jersey remained solidly blue in the Presidential contest.

Will this trend continue in 2022? New Jersey may well be an early indicator, as it holds elections for governor and state legislature this November. Incumbent Phil Murphy, elected by a 56%-42% margin in 2017 over former Lt. Governor Kim Guadagno, is up for reelection against Republican State Assemblyman Jack Ciattarelli. The race is in many ways a microcosm of the opportunities that exist for Republicans in the region, and the challenges they face exploiting them.

On paper, Murphy should be vulnerable. He has presided over not just the highest COVID-19death rate in the country, but one of the highest in the world, on par with Hungary, Bosnia, and the Czech Republic. That death rate has occurred despite one of the toughest lockdowns in the country. New Jersey has been willing to elect Republican governors in the past, most recently Murphy’s predecessor Chris Christie who won in 2009 and 2013. Murphy has also feuded incessantly with political bosses within his own party who might not be unduly troubled by his defeat.

New Jersey is a polarized state and tends to produce two types of elections: Democratic wins of between 10-12%, which have defined virtually every U.S. Senate race since 1992, and every governor’s race they won, or narrow Republican victories for governor. The difference, at least in part, seems to involve timing. Christine Todd Whitman in 1993 and Chris Christie in 2009, both Republicans, challenged incumbent Democrat governors who had overseen unpopular tax increases. Both elections also took place within the first year of Democratic presidents’ terms – identical to the situation Phil Murphy faces this year.

Yet Ciattarelli has struggled in the polls, generally lagging 12-18 points behind Murphy. On the surface, the situation looks bleak for Republicans. Joe Biden beat Donald Trump by 2 percentage points more in 2020 than Hillary Clinton did in 2016 (57% – 41% vs. 55% – 41%). Moreover, in 2016, Donald Trump carried 5 out of 12 Congressional seats, as did Republican candidates. In 2018, Republicans lost 4 of those seats, reducing them to a single seat. While they regained one seat in 2020, it was by narrowly holding the seat of party-switcher Jeff Van Drew. Donald Trump only carried three out of twelve seats in 2020, despite only a 2% shift in overall margin.

But a closer look at demographic shifts driving these changes may reveal an opportunity for Republicans statewide. While Trump suffered substantial losses among suburban, traditionally Republican leaning voters in New Jersey, he also made major gains with Hispanic American and African American voters. However, these gains were often concentrated in heavily Democratic Congressional districts, leading to the down-ballot massacre for Republicans in congressional races.

Ciartarelli’s challenge then is that he either needs to win the new Trump voters, or try to recreate the old pre-Trump GOP coalition in New Jersey, many of whom did not just vote against Donald Trump but have voted against all Republicans in recent years. Ciartarelli’s own old assembly seat is represented by a Democrat, as Hunterdon County went from 58%-40% Romney in 2012, to 54%-40% Trump in 2016, to only 51%-47% Trump in 2020.

Can these voters be won back? Ciartarelli has the issues on his side: Murphy’s poor COVID response, Democratic corruption, and high taxes. But there is now a regionalist element. Much as Democrats are perceived as hostile to rural America, suburban dissatisfaction with the national GOP is driven not solely by ideology but by a perception that the Republican Party not only does not care about them but is outright hostile. Behind this perception is the memory of one of the few tax increases Republicans have passed in modern history. As part of the 2017 Tax Cut bill, Republicans eliminated the State and Local Tax deduction, or SALT which allowed taxpayers to deduct their entire local and state tax bills from their federal returns. In states with high local tax rates like New Jersey and New York, this represented a tax increase on many voters. Republicans were quick to note that with a $12,000 standard deduction this only applied to very well-off voters, but those happened to be Republican voters in states like New Jersey with high cost of living. Ironically, for these households, Democrats became the party of lower taxes.

The justification offered by national Republicans, that blue states should lower their taxes, or people should move, was self-defeating for local Republicans. Faced with a Democratic state government, Republicans in New Jersey, and arguably across the Northeast, had no influence over local tax policy and were effectively told it was their own fault they were unable to do something impossible. Any who took up the advice to move, are, of course, no longer part of the electorate Ciartarelli needs. SALT is painful for many, no doubt, but its real impact has been cultural, painting the Republican party as hostile to the region, and unconcerned with local Republicans within it.

How Ciartarelli approaches the SALT issue will be key, as it will be for Republican prospects in neighboring New York, where Congressman Lee Zeldin of Long Island, former Westchester County Executive Rob Astorino, and Andrew Giuliani, son of former New York City Mayor Rudy Giuliani, are early contenders to challenge Andrew Cuomo (assuming he even makes it to the election, given the scandals now engulfing his office). Cuomo faces multiple allegations of sexual misconduct as outlined this week in a report from theNew York’s Attorney General. His handling of the COVID-19 pandemic, especially regarding nursing homes, has also prompted an investigation by the Attorney General.  Cuomo confronts the real prospect of   being impeached and removed from office by  a legislature controlled by his own party.

In many ways, Ciartarelli and Zeldin illustrate the challenges Republicans face in the Northeast. The media says these problems are either due to association with Donald Trump (false) or the national party (true). The real issue is less Donald Trump, who did decently with these voters, and more a perception that national Republicans did not look out for the interests of their own voters in blue states.

A contrast could be drawn with successful Republicans in New England, such as Charlie Baker and Phil Scott of Massachusetts and Vermont, both of whom have won landslide victories in Democratic states, and both of whom have broken with Donald Trump and the national party when politically necessary.

But evidence from New Hampshire indicates there is also a middle course. Governor Chris Sununu won reelection by a margin of 66-32% in 2020, even as Biden won his state 53%-45%. Sununu did not endorse Biden and made clear he supported President Trump. But he was also willing to make clear when he thought the President or national party were hurting his state, and remained loyal first and foremost to the voters of his state.

If Sununu runs for Senate and manages to unseat Senator Maggie Hassan next year, it will show a model that other Republicans in the region should look to follow. Republicans in the Northeast do not need to praise or flirt with Democrats. They do not have to repudiate Republicanism or Conservatism. They do, however, need to fiercely stand up for their constituents. What has harmed the Republican Party in New Jersey is not being insufficiently friendly to Democrats, but the perception that New Jersey and New York Republicans sold out their voters in the state for crumbs from the national table, whether it was with Christie going national or the repeal of SALT. Republican politicians need to fight for Republican voters everywhere, rather than abandoning those who live in “Blue States”. After all, if Republican candidates won’t fight for them, who will?