A tale of two landslides: The 2020 Election 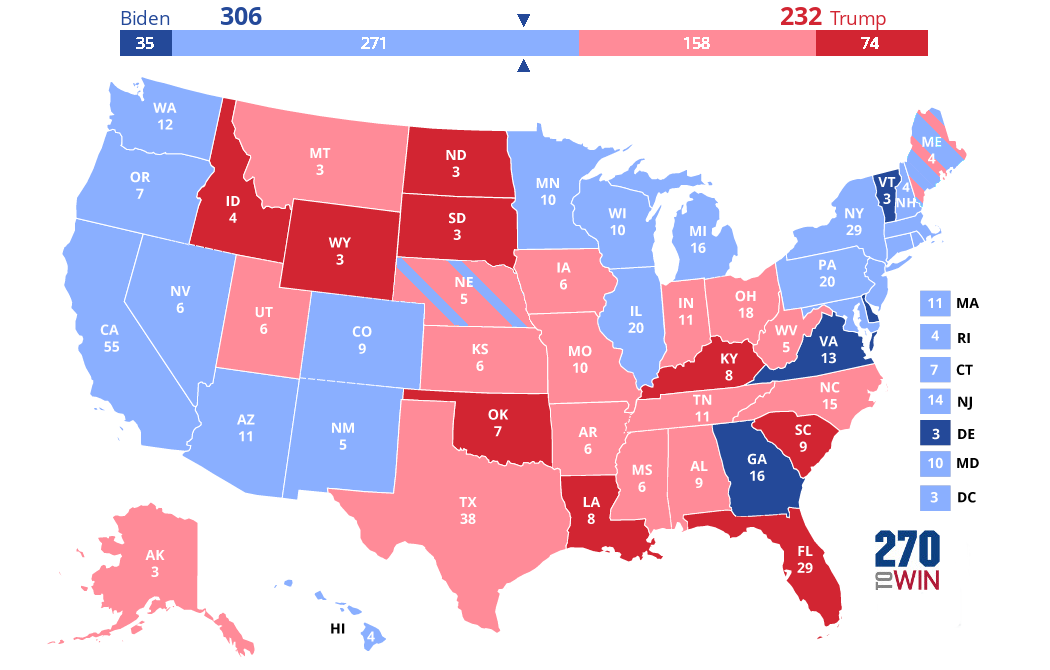 In the final week of October 2020, a dispute erupted between Nate Silver, the Editor of Fivethirtyeight which has become the self appointed gatekeeper of political polling, and Robert Cahaly, the President of the Trafalgar Group, a Republican-aligned polling firm. Erupting on Twitter, a choice of venue advertising the degree to which the dispute was the realm of insiders within American political journalism, it ostensibly involved Silver questioning the toplines of several recent Trafalgar polls which had been uploaded on Twitter. A bizarre dance followed in which the polls in question were deleted, and Cahaly left up a post implying that the polls may not have been genuine Trafalgar products in the first place. Behind the spat lay a bigger question. Nate Silver, as a data aggregator, was invested in the concept of opinion polling as a science with objective standards. Fiddling with the numbers in any way, or inserting one's own judgement was malpractice at best and outright fraud at worst. Cahaly had earned Silver's ire by doing just that. Cahaly believed that there was a large contingent of Trump supporters, especially among non-college educated whites who pollsters were having trouble detecting. That this had occurred in 2016 was not seriously disputed. Pollsters had missed Donald Trump's support among non-college educated whites, a failure widely blamed upon a decision by pollsters in 2016 not to weight their samples by education. In 2020, virtually all major pollsters had claimed to correct this, by weighting their samples for education. For Nate Silver, this was a scientific explanation of a failure with a scientific method for ensuring it would not happen again. While he accepted that polling errors might exist, he was reasonably comfortable dismissing the prospect that this specific "shy trump voter" phenomenon would reappear.

Cahaly was not so sure. Cahaly did not believe that the problem was solely that pollsters did not contact enough non-college educated whites in their samples. He also believed that the samples they did contact were unrepresentative of the groups in question. Cahaly posited that due to "social desirability bias" Trump supporters within demographics adjacent to Democratic voting ones, especially white non-college educated women, were far less likely to answer pollsters. The result was that while there was no longer a problem with underweighting non-college whites or Republicans, the samples of both showed far lower support for Donald Trump than was in fact the case. To correct for this, Cahaly began asking a different question, namely rather than "who do you intend to vote for?" he asked "who do you expect your neighbors to vote for?" The result was vastly higher support for Donald Trump.

Trafalgar's final polls overestimated Donald Trump in almost all swing states, but they were ironically closer to the final results, especially in the Midwest than any other pollsters, except for the Des Moines Register's Ann Selzer who found a 7% Trump lead in Iowa when most other polls showed a 2% race. Trump won by 7.5%. In the end, a key factor was that contrary to polls showing vast swings among non-college educated whites from 2016, some in the double-digits, that demographic barely budged. The result was that states that non-Trafalgar pollsters showed as toss-ups such as Ohio and Iowa ended up not close at all, actually moving in a Republican direction relative to the country at large from 2016. States where pollsters showed a high-single digit lead for Biden such as Wisconsin, Michigan and Pennsylvania, ended up with razor-thin Biden victories of less than 1%, 2.8% and 1.2%. All three also drifted in a Republican direction. There had been indications this may have been impending. Republican registrations easily outstripped Democratic ones throughout 2020.

If the above sounds like the post-mortem on a surprise Donald Trump victory that is because it very well could be. All the pieces were there. Despite Democratic beliefs that Donald Trump had maxed out his support in 2016, he increased his vote total by more than 10 million, from 63 million to nearly 74 million. He made extensive gains among Hispanics, especially in Florida, winning the state by the largest margins of any candidate since 1988. Despite predictions of a swing-back, non-college whites if anything trended Republican from 2016. All the stars aligned.

And yet Joe Biden won the election. He did so with the highest number of votes ever won by a candidate for President, a total likely to eclipse 80 million if New York ever finishes counting ballots. He will be the first Democrat to carry the state of Georgia since Bill Clinton in 1992. He achieved the highest percentage of the vote of any Democrat since LBJ in 1964 in Utah and Alaska. His final popular vote margin will exceed Barack Obama's over Mitt Romney in 2012.

So what precisely happened in 2020? Did Donald Trump vastly overperform expectations and come within a hair's breath or a debate performance of pulling off the upset of the century? Or did Joe Biden triumph as he was always going to? The answer is that both occurred. In 2020, all the ingredients necessary for both a Democratic landslide and an upset Trump victory were in place. In the end, when the two crashed together, the result was a narrow Biden win. A Biden win but an empty one. Democrats lost more than a dozen seats in the US House and failed to gain more than a single seat in the US Senate. The irony is that had Donald Trump's support been static from 2016, Biden would have easily won a landslide, winning not just North Carolina and Florida, but Utah, Texas, and even Montana. This can be illustrated by comparing the popular vote total in Texas, which saw a nearly 24% increase in turnout over 2016, only to end in a fairly similar place statewide, with not a single seat changing hands either congressionally or in the State House.

In Texas, Joe Biden won almost 600,000 more votes than Donald Trump had in 2016. Had Donald Trump merely increased his vote by 10%, Biden would have comfortably won Texas. Yet this is not what happened. While Joe Biden gained nearly 1.4 million votes, or around 30% more than Clinton won in 2016, Donald Trump gained almost as many, 1.2 million. If anyone suggested in late October that with "demographic trends", the shift against Trump in the suburbs, Democratic organization and a record turnout increase that the net result would be almost negligible in terms of the final margin, they would have been widely mocked. Yet that is precisely what happened in Texas. And it happened across the country. A brief look at North Carolina and Wisconsin is illustrative.

In both cases, Joe Biden gained more than enough votes over Hillary Clinton to produce a landslide with anything resembling 2016 turnout. Yet, due to a surge in turnout for Donald Trump that produced a defeat in North Carolina, and only the narrowest of victories in Wisconsin, a result even less impressive for the Democrats when it is considered how much of the vote in 2016 went to anti-Trump third parties. In the case of North Carolina, this surge upset downballot races. The new voters were generally much less likely to split their tickets between popular incumbents and the Presidential race. The result was that in North Carolina's governor's race, the popular incumbent Roy Cooper only barely eeked out a 51-47% victory when polls showed him with leads of around 10%. Further down it was a disaster for Democrats. They lost all three Supreme Court races, losing two incumbents including the Chief Justice, and their incumbent Attorney General won by less than 10,000 votes in what was considered a safe race. All of these contests were close. Democrats appear to have lost the Chief Justice's race by 400 votes, and the greatest GOP statewide margin was 52-48. Nonetheless, the GOP won most of the races.

North Carolina is a microcosm of what happened around the country. While the Presidential result was within the realm of expectations in terms of margin, the turnout and vote totals were not. And the new voters overwelmingly voted for the same party for all offices that they voted for in the presidential race. As Democrats were mostly fighting in Republican turf in the Senate and House races, this resulted in a major underperformance. Voters turning out for Donald Trump had no interest in voting for Democratic candidates for House, Senate, or state legislature, and the large number of new voters rendered incumbency less relevant. This even occurred in California, where Democrats lost four House seats despite Biden increasing his popular vote margin by 800.000 over Hillary Clinton's. Donald Trump cut Biden's percentage margin of victory, and won the most votes of any Republican in history in the state.

If the story of 2020 is that both sides had landslides which collided with one another, why then did so many pollsters get it wrong? I doubt it was for lack of warning. As noted, registration data pointed to a strong GOP ground game, and a decent number of new GOP voters, while all polls showed leakage to Trump among non-white voters. I believe that what actually happened is that most analysts, stuck in a horse-race mindset, decided that elections are either Democratic or Republican years, and concluded that 2020 had to be one or the other. As a result, they disregarded evidence pointing to a GOP landslide or strong performance because they felt the data in favor of a Democratic landslide was stronger and/or agreed with their preconceptions. In the process, they forced a two-dimensional analysis onto a three dimensional problem, with the result that they were blindsided.

Trafalgar was probably right about non-college educated whites, and equally correct to be skeptical about the scale of defections from Trump 2016 supporters. But he was wrong to think that was the entire story. In turn, other pollsters and journalists were so eager to return to the pre-2016 world that they convinced themselves that was what was taking place, ignoring evidence to the contrary, including Democratic failures in 2018 to win statewide in Ohio, Iowa, and Florida, or the fact that Democrats actually lost in Texas. Their conviction that 2018 was a floor not a ceiling for Democrats proved faulty.

There is still a lot to unpack about 2020, not least what it means, but I think we have a fairly good answer to why so many people didn't see it coming. They didn't want to.